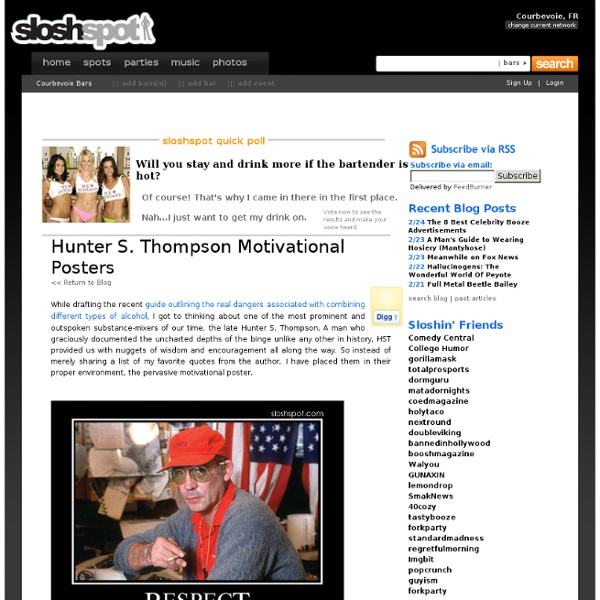 While drafting the recent guide outlining the real dangers associated with combining different types of alcohol , I got to thinking about one of the most prominent and outspoken substance-mixers of our time, the late Hunter S. Thompson. A man who graciously documented the uncharted depths of the binge unlike any other in history, HST provided us with nuggets of wisdom and encouragement all along the way. So instead of merely sharing a list of my favorite quotes from the author, I have placed them in their proper environment, the pervasive motivational poster.

Friday Frodos (4/9 Edition) - GeekWeek Download the new GeekWeek iPhone App and get your Friday Frodos on the go. Available in the App Store on iTunes now! 100 Inspiring Quotes & Demanding Joy - StumbleUpon So many people have said so many things so much better than I will ever be able to. Here are 100 of them. I hope you find at least a few that speak to you. If you want to be happy, be. – Leo Tolstoy The best way to cheer yourself up is to try to cheer somebody else up. – Mark Twain Happiness is excitement that has found a settling down place. Several of these came from Louise Hay, who is pretty terrific. Tags: lists , quotes

James Joyce James Joyce (1882-1941), Irish novelist, noted for his experimental use of language in such works as Ulysses (1922) and Finnegans Wake (1939). Joyce's technical innovations in the art of the novel include an extensive use of interior monologue; he used a complex network of symbolic parallels drawn from the mythology, history, and literature, and created a unique language of invented words, puns, and allusions. James Joyce was born in Dublin, on February 2, 1882, as the son of John Stanislaus Joyce, an impoverished gentleman, who had failed in a distillery business and tried all kinds of professions, including politics and tax collecting. Joyce's mother, Mary Jane Murray, was ten years younger than her husband. She was an accomplished pianist, whose life was dominated by the Roman Catholic Church. In spite of their poverty, the family struggled to maintain a solid middle-class facade. At the outset of the First World War, Joyce moved with his family to Zürich.

BILDblog | Ein Watchblog für deutsche Medien Follow Twitter Conversations - Quotably.com Price Tag Fails Some of these might be innocent mistakes, but I imagine most of them are the result of bored workers. Native American Code Of Ethics | Saved by Slow Death I recently found these Native American code of ethics - I am unsure of where this originated and of it’s accuracy. Regardless of where it originated, I like it and I wanted to pass it on. So much common sense, a great respect for the earth and everything that calls it home. I’m a big nature and animal lover so of course I’m posting it. No Native American culture was perfect, but the Europeans could have learned from them. Native American Code Of Ethics Rise with the sun to pray. Thanks for visiting! Comments containing racism & ignorance will NOT be approved, there is no room for that here. Tags: America, American, American Indian, culture, dignity, earth, ethics, honor, human interest, Indigenous, indigenous people, love, Native American, nature, positive psychology, respect, social philosophy, spirituality

Nadeem Aslam author bio Nadeem Aslam Biography Nadeem Aslam was born in Pakistan in 1966 and moved to Britain at age 14. His family left Pakistan to escape President Zia's regime. His novel Maps for Lost Lovers, winner of the Kuriyama Prize, took him more than a decade to complete. His writings have been compared to those by Chinua Achebe, Chimamanda Ngozi Adichie and Kiran Desai and received an Encore in 2005. Aslam currently lives in north London. This biography was last updated on 01/08/2014. A note about the biographies We try to keep BookBrowse's biographies both up to date and accurate. Membership Advantages Reviews "Beyond the Book" backstories Free books to read and review (US only) Find books by time period, setting & theme Read-alike suggestions by book and author Book club discussions and much more! Interview An Interview with Nadeem Aslam about The Wasted Vigil I wanted to explore and record all of that in The Wasted Vigil.

Look At This... - Mozilla Firefox Where To Go and How To Get There I'm trying 25 new things before my birthday on August 29th! 1. Wear wedges every day for a week 3. 4. 5. 6. 7. 8. 10. 11. 12. 13. 16. 20. 21. 22. 23. 25. Don't Hope Friend....Decide It's Now Or Never Don't Hope Friend....Decide By Michael D. Hargrove While waiting to pick up a friend at the airport in Portland, Oregon, I had one of those life changing experiences that you hear other people talk about, the kind that sneaks up on you unexpectedly. This one occurred a mere two feet away from me. First he motioned to his youngest son (maybe six years old) as he laid down his bags. Then the man stood up, gazed in the eyes of his oldest son (maybe nine or ten) and while cupping his son's face in his hands said, "You're already quite the young man. While this was happening, a baby girl (perhaps one or one-and-a-half) was squirming excitedly in her mother's arms, never once taking her little eyes off the wonderful sight of her returning father. After several moments, he handed his daughter to his oldest son and declared, "I've saved the best for last," and proceeded to give his wife the longest, most passionate kiss I ever remember seeing. "Two whole days!" Two days?

Ralph Waldo Emerson Ralph Waldo Emerson (May 25, 1803 – April 27, 1882) was an American essayist, lecturer, and poet, who led the Transcendentalist movement of the mid-19th century. He was seen as a champion of individualism and a prescient critic of the countervailing pressures of society, and he disseminated his thoughts through dozens of published essays and more than 1,500 public lectures across the United States. He remains among the linchpins of the American romantic movement,[3] and his work has greatly influenced the thinkers, writers and poets that have followed him. Early life, family, and education[edit] Emerson was born in Boston, Massachusetts, on May 25, 1803,[6] son of Ruth Haskins and the Rev. In 1826, faced with poor health, Emerson went to seek out warmer climates. While in St. Early career[edit] Moving north to England, Emerson met William Wordsworth, Samuel Taylor Coleridge, and Thomas Carlyle. Literary career and Transcendentalism[edit] Ralph Waldo Emerson in 1859

This is great. Hunter S. Thompson was a wise man. by bytor Nov 1