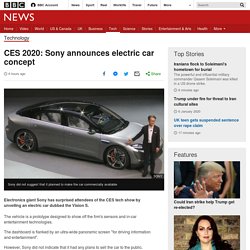 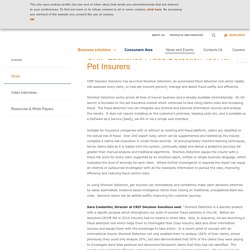 Sherlock Detection works across all lines of insurer business and is already available internationally. Its UK launch is focussed on the pet insurance market which continues to face rising claims costs and increasing fraud. The fraud detection tool can integrate any internal and external information sources and analyse the results. It does not require installing on the customer’s premises, keeping costs low, and is available as a Software as a Service [SaaS], via API or via a simple web interface. Suitable for insurance companies with or without an existing anti-fraud platform, claims are classified on the actual risk of fraud. Barclays signs tech partnership with invoice insurance firm Nimbla – FinTech Futures. UK multinational bank Barclays has announced a new partnership with invoice insurance start-up Nimbla. 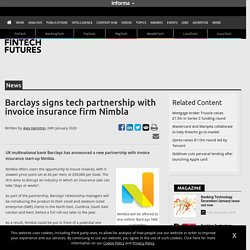 Nimbla will be offered to one million Barlcays SME customers Nimbla offers users the opportunity to insure invoices, with it slowest price point set at £6 per item, or £50,000 per book. The firm aims to disrupt an industry in which an insurance sale can take “days or weeks”. As part of the partnership, Barclays’ relationship managers will be introducing the product to their small and medium-sized enterprise (SME) clients in the North East, Cumbria, South East London and Kent, before a full roll-out later in the year. As a result, Nimbla could be put in front of a potential one million SME clients. Still serious Brexit 'issues to resolve’ - City minister. Best Pet Insurance for Dogs 2020 - Bought By Many. The global risks report 2020. Keoghs Insight. Following the election of the Government with a substantial majority and the subsequent passing of the Withdrawal Agreement Bill in the House of Commons it is now clear that the UK will exit the EU on 31 January 2020... 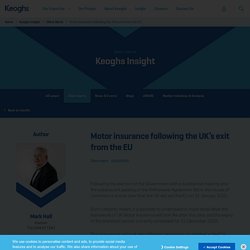 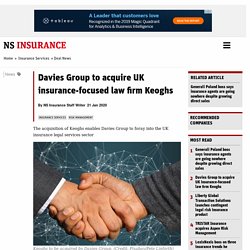 (Credit: Pixabay/Pete Linforth) British insurance firm Davies Group has agreed to acquire Keoghs, an insurance-focused law firm, for an undisclosed price. The acquisition will help Davies Group to foray into the UK insurance legal services sector, while creating a major player in insurance and risk management. Keoghs serves the UK insurance industry with dispute resolution and risk services for the motor, casualty, specialty, and complex classes. Does your company nurture neurodiverse talent? Media playback is unsupported on your device How do you make your workplace more welcoming to neurodiverse employees, and ensure their talent is nurtured? 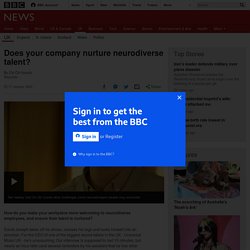 David Joseph takes off his shoes, crosses his legs and tucks himself into an armchair. UK motorists pay £815 on average for comprehensive car insurance. Successfully Introducing a Change Management Process in Insurance. Overcome three of the most common challenges of delivering change and the importance of having a robust change management process in place. 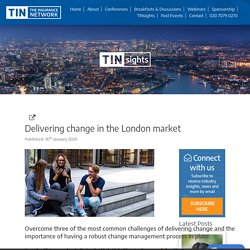 As we head into a new decade, the London Market is looking at a change revolution. Blueprint One aims to deliver transformational change spearheaded by technology in an attempt to re-establish the London Market as the world’s foremost insurance centre. To do this, market participants are having to re-evaluate their operating models while continuing with business as usual. The strategy seems to have the support of the insurance sector. Property and Casualty Insurance 2020. Health Insurance Trends 2020. World First: Bank of England unveils climate stress test to banks and insurance companies - TruePublica. By Kieran Cooke: Tackling climate change isn’t just about replacing fossil fuels with renewables, or planting more trees. 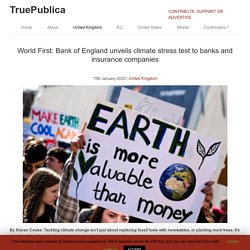 It’s about confronting climate stress across society. LONDON – The warming world means climate stress now permeates every part of society. And so an entire financial system which has underpinned the growth of a global economy largely dependent on fossil fuels must be reoriented to deal with what is fast becoming a full-blown crisis. A campaign to halt or withdraw multi-million dollar investments from industries associated with fossil fuel use is gaining momentum.

And the central banks – the institutions responsible for regulating countries’ financial systems – are now taking action. A journey into the future of car insurance. There is a fundamental problem in the methodology with which insurers traditionally assess risks We currently insure vehicles with automation levels SAE Level 0 (ESP) to 2, i.e. the driver is assisted by the vehicle when driving through longitudinal and lateral guidance, provided his or her vehicle is equipped with appropriate Level 2 assistance systems. 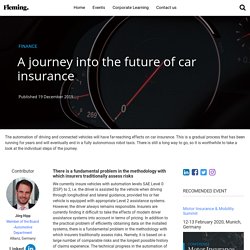 However, the driver always remains responsible. Insurers are currently finding it difficult to take the effects of modern driver assistance systems into account in terms of pricing. In addition to the practical problem of efficiently obtaining data on the installed systems, there is a fundamental problem in the methodology with which insurers traditionally assess risks. How technology will reshape insurance operations. Insurance companies’ technology and operations functions have traditionally operated independently. 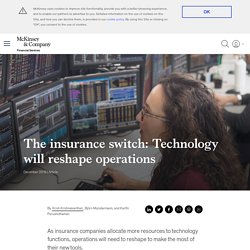 Technology facilitated the operations staff’s work, but operations—underwriting, claims, and marketing—was the principal driver of corporate performance. The relationship between the two functions is changing as insurers allocate more resources to technology functions without making similar investments in operational ones. Incumbents hope this shift will improve profitability and help them compete effectively on digital terrain—especially with insurtechs, which have technology-driven operations. Indeed, savvy insurers of all types are using new technologies to better serve customers.

A view from the Pacific Insurance Conference: How to create a successful insurance ecosystem. January 8, 2020The Pacific Insurance Conference in Hong Kong is one of the most important events in the Asian insurance industry calendar, and the 29th edition saw more than 300 insurance executives gather to debate, discuss, and explore the industry’s future. One of the hottest topics was the rise of ecosystems. This trend is driven by changing customer expectations and technology innovations, and it is impacting many industries.

Insurance is no exception (Exhibit 1). We strive to provide individuals with disabilities equal access to our website. How can Generation Z compete with robots? Focus on the human touch. Gartner: Augmented Analytics is the Future of Analytics. Portal gives insurers nowhere to hide. Whirlpool washing machine recall poses claims threat due to lengthy logistics. 5G the biggest technological change for insurers – IUA. FCA and Bank of England to develop data strategies. Will the car insurance industry survive the 4th industrial revolution? People 'twice as likely' to insure their pets as themselves. Over a third of UK employees said they have, or would take out, pet insurance, study shows. CES 2020: The Russian car with no driver at the wheel. Image copyright Yandex Driverless cars have become a staple of CES but in the past they've generally been kept stationary on the show floor.

When Russian tech giant Yandex invited me to go for a ride on the actual streets of Las Vegas in its model - a reworked Toyota Prius loaded with sensors and a big computer in the boot - I was expecting to be underwhelmed. I've seen mini-delivery trucks pootle around at walking speeds on test tracks and I've been in a driverless car with a human very much at the wheel, fingers nervously poised millimetres from the steering wheel "just in case". And rightly so - when autonomous car tech goes wrong, as Tesla and Uber can both testify, the results can be catastrophic. A chatbot pulled me out of a 'really dark place' Image copyright Alexa Jett Alexa Jett has suffered some heavy blows in recent years. Now 28, she was diagnosed with thyroid cancer in 2016. Although she was given the all-clear, in August 2019 another crisis hit when her best friend and former boyfriend died of cancer at the age of 33.