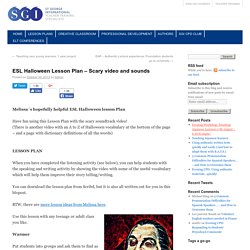 (There is another video with an A to Z of Halloween vocabulary at the bottom of the page – and a page with dictionary definitions of all the words) When you have completed the listening activity (see below), you can help students with the speaking and writing activity by showing the video with some of the useful vocabulary which will help them improve their story telling/writing.

You can download the lesson plan from Scribd, but it is also all written out for you in this blopost. BTW, there are more lesson ideas from Melissa here. Use this lesson with any teenage or adult class you like. Warmer Put students into groups and ask them to find as many words as possible in 5-10 mins from the words eg. hello, when, ape, yellow etc Vocab Elicit the following verbs from the students.

Niagara Daredevils ~ Over the Falls. Amira Time: Follow the smell. Se connecter à Facebook. Stirred Up - People Were Dying to Follow These 10... Tone and Mood in Poetry: OCD by Neil Hilborn. Let’s be honest about poetry…students find it boring… groans can be heard near and far when I introduce the unit.. 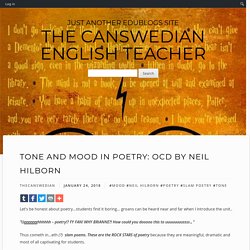 “Uggggggghhhhhh – poetry!? FY FAN! WHY BRIANNE?! How could you dooooo this to uuuuuuuussss…” Thus cometh in…eth (?) I wil admit that a lot of people find them easy to make fun of, just like Jonah Hill in this scene from 22 Jump Street… Tips engelska – Google Drive. Oprah Winfrey's Golden Globes speech: the full text. The following is the full text of Oprah Winfrey’s speech as she accepted the Cecil B DeMille Award at Sunday’s Golden Globe Awards: In 1964, I was a little girl sitting on the linoleum floor of my mother’s house in Milwaukee watching Anne Bancroft present the Oscar for Best Actor at the 36th Academy Awards. 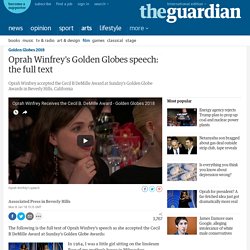 She opened the envelope, and said five words that literally made history: “The winner is Sidney Poitier.” Up to the stage came the most elegant man I had ever seen. I remember his tie was white and, of course, his skin was black. And I’d never seen a black man being celebrated like that. In 1982, Sidney received the Cecil B DeMille Award right here at the Golden Globes, and it is not lost on me that at this moment, there are some little girls watching as I become the first black woman to be given this same award.

If at first you don’t succeed. This EFL lesson plan is designed around a beautiful short film by Nuno Rocha called 3 X 3 and the themes of intelligence and persistence. 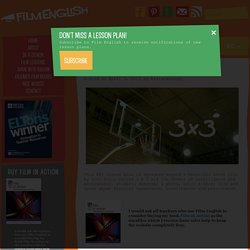 Students describe a photo, watch a short film and speak about physical appearance, intelligence and persistence. All That We Share. This ELT lesson plan is designed around a short video titled “All That We Share” by Danish TV channel TV2Danmark. 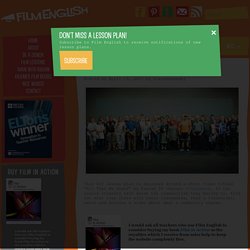 In the lesson students talk about the communities they belong to, find out what they share with their classmates, read a transcript, watch and discuss a video about what a community shares. I would ask all teachers who use Film English to consider buying my book Film in Action as the royalties which I receive from sales help to keep the website completely free. Language level: Intermediate (B1) – Upper Intermediate (B2) Learner type: Teens and adults. Life Lessons From Richard Branson. This transcript has been automatically generated and may not be 100% accurate. ... even among the small group of entrepreneurs and businessmen who achieved his level of success ... 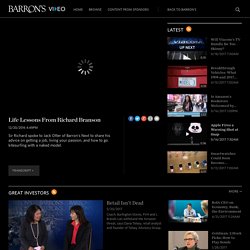 Bohemian Rhapsody by Queen Set To A Movie Scene. Queen's Bohemian Rhapsody Was Turned Into a Movie Scene! Untitled. Woman Undergoes Bizarre Body Changes In Short Film. Barbara is a passionate writer and animal lover who has been professionally blogging for over 10 years and counting. 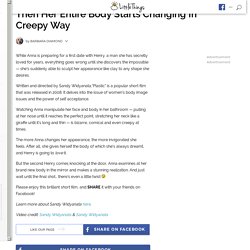 While Anna is preparing for a first date with Henry, a man she has secretly loved for years, everything goes wrong until she discovers the impossible — she’s suddenly able to sculpt her appearance like clay to any shape she desires. Written and directed by Sandy Widyanata,”Plastic” is a popular short film that was released in 2008. It delves into the issue of women’s body image issues and the power of self acceptance.

Watching Anna manipulate her face and body in her bathroom — pulling at her nose until it reaches the perfect point, stretching her neck like a giraffe until it’s long and thin — is bizarre, comical and even creepy at times. The more Anna changes her appearance, the more invigorated she feels. Behind the News. Patrick är 15 år, döv och har aldrig pratat med någon. Får äntligen lära sig teckenspråk - ni måste faktiskt se skillnaden! Nick Vujicic - Attitude is Altitude.com / Life Without Limbs.org. Bob The Busker Cat Heads For Hollywood. Kortfilmsklubben - engelska: Sure thing - UR Skola.

Beloved teen Sam Berns dies at 17 after suffering from rare disease. Saturday night could have been a moment for Sam Berns to celebrate -- standing in the middle of Gillette Stadium, flanked by some of his beloved New England Patriots, and no doubt cheered heartily by the nearly 70,000 fans surrounding him. 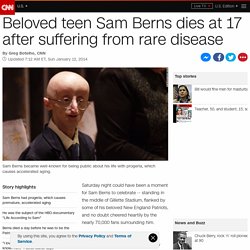 But it wasn't to be. Instead of having Berns as an honorary captain in their NFL playoff with the Indianapolis Colts, the Patriots held a moment of silence for the young man who inspired them and many others as he lived with progeria, which causes premature, accelerated aging. "Do it for Sammy! " one man yelled, piercing the quiet, in video of the ceremony on Boston.com. Berns died Friday evening due to complications from the rare genetic disease, according to the Progeria Research Foundation. He was 17. "I loved Sam Berns and am richer for having known him," Patriots owner Robert Kraft said. Kraft, one of the most well-respected owners in his sport, wasn't Berns' only fan.

More than anything, Sam lived. The Witness. The Witness. Burnistoun - Voice Recognition Elevator in Scotland. Marabou Mint 200 g. Julia Roberts Just Made One Of The Most Powerful Videos Ever. Shane Koyczan: To This Day ... for the bullied and beautiful. How I Became The Bomb - Ulay, Oh. Joel Alme & Jill Johnson sjunger "Rainbow Road" för fångar på ett Amerikanskt fängelse. I Forgot My Phone. The Other Pair. This ELT lesson plan is designed around a short film by Sarah Zorik titled The Other Pair and the themes of altruism and empathy. 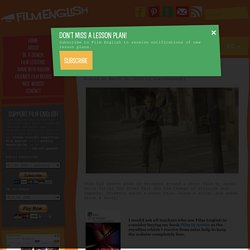 Cameron Russell: Looks aren't everything. Believe me, I'm a model. Keep Going with Gorbys - Stipendiat Nr. 3 - XTR3MFLIPP3RS. Look Up. My philosophy for a happy life: Sam Berns at TEDxMidAtlantic 2013.