Pope Francis: It's good to talk, but not on mobiles. Image copyright Reuters Pope Francis has called for people to put away their mobile phones at the dinner table and get talking, citing Jesus, Mary and Joseph as examples. 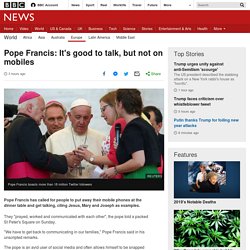 They "prayed, worked and communicated with each other", the pope told a packed St Peter's Square on Sunday. "We have to get back to communicating in our families," Pope Francis said in his unscripted remarks. The pope is an avid user of social media and often allows himself to be snapped with pilgrims for selfies. Pope Francis: Mass is for prayers not mobile phones "I ask myself if you, in your family, know how to communicate or are you like those kids at meal tables where everyone is chatting on their mobile phone ... where there is silence like at a Mass but they don't communicate," the Pope said. 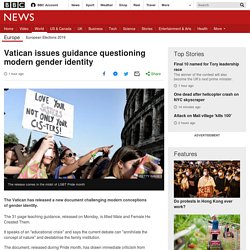 The 31-page teaching guidance, released on Monday, is titled Male and Female He Created Them. It speaks of an "educational crisis" and says the current debate can "annihilate the concept of nature" and destabilise the family institution. The document, released during Pride month, has drawn immediate criticism from LGBT groups. It was issued by the Congregation for Catholic Education as teaching instruction to those who work with children.

It is not signed by Pope Francis himself, but quotes him and scripture within its reasoning. What does the document say? The document calls for dialogue, but issues guidance on a number of topics including the transgender community. Notably it criticises the modern understanding of gender as being more complex than the binary division of sexes. Media playback is unsupported on your device Analysis: Questionable timing. How Pope Francis could shape the future of robotics. Image copyright Pontifical Academy for Life It might not be the first place you imagine when you think about robots. 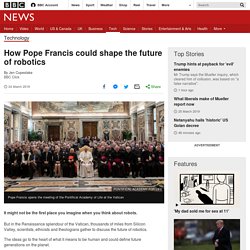 But in the Renaissance splendour of the Vatican, thousands of miles from Silicon Valley, scientists, ethicists and theologians gather to discuss the future of robotics. The ideas go to the heart of what it means to be human and could define future generations on the planet. The workshop, Roboethics: Humans, Machines and Health was hosted by The Pontifical Academy for Life. Epochal changes The Academy was created 25 years ago by Pope John Paul II in response to rapid changes in biomedicine. It studies issues including advances in human genome editing techniques.

These techniques were controversially claimed to have been used by Chinese scientist He Jiankui, to alter the genes of twin girls so they could not get HIV. In the letter, the Pope emphasises the need to study new technologies: communication technologies, nanotechnologies, biotechnologies and robotics. Human robots. Albert Einstein's 'God letter' expected to sell for $1.5m.

Image copyright Reuters A handwritten letter by Albert Einstein in which he grapples with the concept of religion is being auctioned in New York on Tuesday. 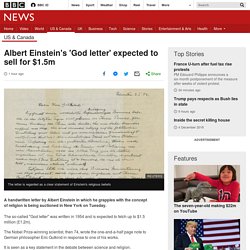 The so-called "God letter" was written in 1954 and is expected to fetch up to $1.5 million (£1.2m). The Nobel Prize-winning scientist, then 74, wrote the one-and-a-half page note to German philosopher Eric Gutkind in response to one of his works. It is seen as a key statement in the debate between science and religion. "This remarkably candid, private letter was written a year before Einstein's death and remains the most fully articulated expression of his religious and philosophical views," a statement from the auction house says.

What you may not know about Einstein In the letter, written in his native German, Einstein takes issue with the belief in God. "The word God is for me nothing but the expression and product of human weaknesses," he writes. Image copyright Getty Images.