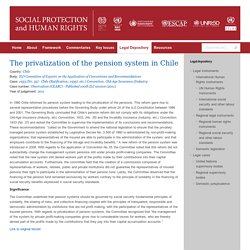 This reform gave rise to several representation procedures before the Governing Body under article 24 of the ILO Constitution between 1986 and 2001. The Governing Body concluded that Chile’s pension reform did not comply with its obligations under the Old-Age Insurance (industry, etc) Convention, 1933, (No. 35) and the Invalidity Insurance (Industry, etc.) Convention, 1933 (No. 37) and asked the Committee to supervise the implementation of its conclusions and recommendations. These recommendations “called on the Government to amend the national legislation to ensure that the privately managed pension system established by Legislative Decree No. 3.500 of 1980 is administered by non-profit-making organizations; that representatives of the insured are able to participate in the administration of the system; and that employers contribute to the financing of the old-age and invalidity benefits.”

At best, Josh Frydenberg's changes to industry super are pointless vandalism. In another time and place, Trotsky had a saying about war: “You might not be interested in war, but war is very interested in you.” 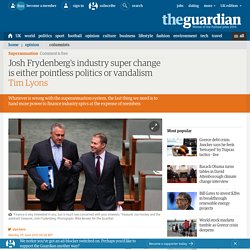 An accurate modern take might substitute finance for war. Because modern finance is very, very interested in you – and your superannuation, in particular. Donor - Annual Returns. No sure thing in the superannuation lottery - The Drum. Opinion Posted Before the the Government gives retail super funds equal billing with industry funds, it should demand to know why they are giving their customers 25 per cent less in retirement, writes Alan Kohler. 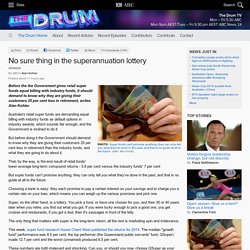 Australia's retail super funds are demanding equal billing with industry funds as default options in industry awards, which sounds fair enough, and the Government is inclined to do it. But before doing it the Government should demand to know why they are giving their customers 25 per cent less in retirement than the industry funds, and what they are going to do about it. Unions welcome FSI focus on lower super fees and retention of FOFA laws. Unions welcome today’s publication of the interim report of the Financial System Inquiry. 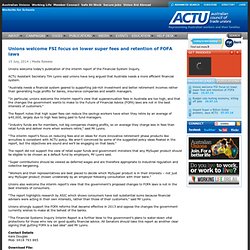 ACTU Assistant Secretary Tim Lyons said unions have long argued that Australia needs a more efficient financial system. “Australia needs a financial system geared to supporting job-rich investment and better retirement incomes rather than generating huge profits for banks, insurance companies and wealth managers. “In particular, unions welcome the interim report’s view that superannuation fees in Australia are too high, and that the changes the government wants to make to the Future of Financial Advice (FOFA) laws are not in the best interests of customers.” The Report notes that high super fees can reduce the savings workers have when they retire by an average of $40,000, largely due to high fees being paid to fund managers.

BT reveals post-awards strategy BT Financial Group will pitch its MySuper product to at least 30,000 employers via Westpac's business bank should the government proceed with its plan to take superannuation out of modern awards. 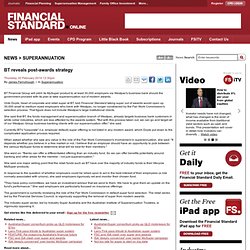 Vicki Doyle, head of corporate and retail super at BT, told Financial Standard taking super out of awards would open up 30,000 small to medium sized employers who bank with Westpac, no longer constrained by the Fair Work Commission's selection process. That figure does not include Westpac's large institutional clients. She said that BT, the funds management and superannuation branch of Westpac, already targets business bank customers in white collar industries, which are less affected by the awards system. 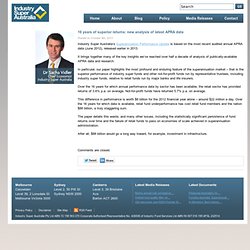 It brings together many of the key insights we’ve reached over half a decade of analysis of publically-available APRA data and research. In particular, our paper highlights the most profound and enduring feature of the superannuation market – that is the superior performance of industry super funds and other not-for-profit funds run by representative trustees, including industry super funds, relative to retail funds run by major banks and life insurers. Over the 16 years for which annual performance data by sector has been available, the retail sector has provided returns of 3.6% p.a. on average. 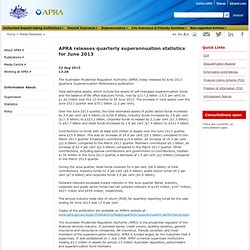 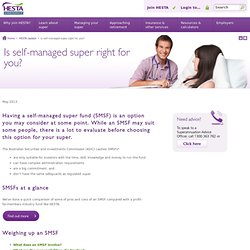 While an SMSF may suit some people, there is a lot to evaluate before choosing this option for your super. The Australian Securities and Investments Commission (ASIC) caution SMSFs*: are only suitable for investors with the time, skill, knowledge and money to run the fundcan have complex administration requirementsare a big commitment, anddon’t have the same safeguards as regulated super. Equal-representative-trustee-model-super-funds-deliver-higher-average-returns. Why a financial transaction tax is good for your pension. Before the end of 2012, it is likely that 9 EU Member countries will invoke the “Enhanced Co-operation Procedure” and move ahead with a Financial Transactions Tax (FTT), that, if it had broad coverage of financial instruments and players would raise over USD$30bn, providing a modest but significant ease to Europe’s credit and credibility problems. 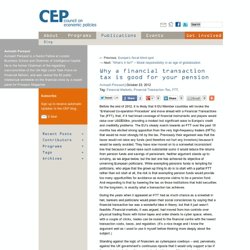 The EU’s steady march towards an FTT over the past 18 months has elicited strong opposition from the very high-frequency traders (HFTs) that would be most strongly hit by the tax. Previously their argument was that the taxes would not raise any funds (and therefore not hurt any investors) because it would be easily avoided. They have now moved on to a somewhat inconsistent line that because it would raise such substantial sums it would reduce the returns from pension funds and savings of pensioners. Neither argument stands up to scrutiny, as we argue below, but the last one has achieved its objective of unnerving European politicians. Corporate boards suck: Should we get rid of corporate directors?