If you think black holes are strange, white holes will blow your mind. By Carlo Rovelli NEVER trust the textbooks, even the ones written by great scientists. 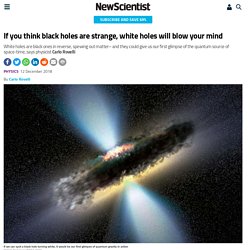 In his celebrated 1972 tome Gravitation and Cosmology, Nobel prizewinning physicist Steven Weinberg called the existence of black holes “very hypothetical”, writing that “there is no [black hole] in the gravitational field of any known object of the universe”. He was dead wrong. Radio astronomers had already been detecting signals from matter falling into black holes for decades without realising. Today we have lots of evidence that the sky is teeming with them.

The story may now be repeating itself with white holes, which are essentially black holes in reverse. The reason to suspect white holes exist is that they could solve an open mystery: what goes on at the centre of a black hole. Einstein’s theory of general … Stunning Footage of Sperm Whales Attempting to Communicate With Freedivers Using Clicking Noises. In 2014 James Nestor, freediver and author of the book DEEP: Freediving, Renegade Science, and What the Ocean Tells Us about Ourselves, gave a fascinating talk entitled “Humanity and the Deep Ocean” at The Interval at Long Now in San Francisco. 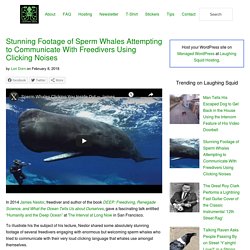 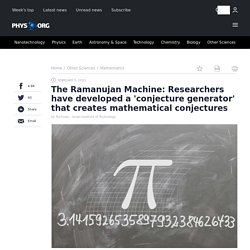 They have already used it to generate a number of previously unknown formulas. Stanford Designer is Making Bricks Out of Fast-Growing Mushrooms That Are Stronger than Concrete. While there aren’t any species of mushroom large enough to live in, one Bay-area designer thinks he can make one if he only cranks out enough of his patented “mushroom bricks.” 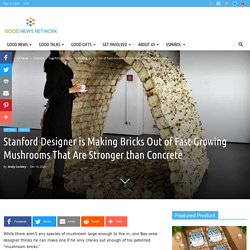 In fact, he knows he can do it, because he’s already build a showpiece called “Mycotecture”—a 6×6 mushroom brick arch from Ganoderma lucidum or reishi mushrooms. Phil Ross doesn’t use the mushroom, or fruiting body of the reishi; he uses mycelium, the fast-growing fibrous roots that make up the vast majority of fungus lifeforms. Retired Man Solves Decades-Old Maths Problems While Brushing His Teeth. During what was an unremarkable summer’s morning, a 67-year-old man had a modern-day eureka moment, allowing him to suddenly crack a probability problem that has stumped statisticians since the 1950s. 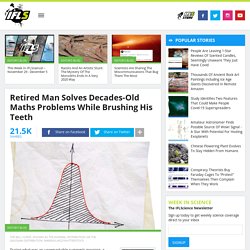 People with creative personalities really do see the world differently. What is it about a creative work such as a painting or piece of music that elicits our awe and admiration? 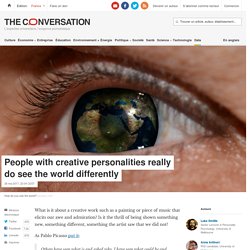 Is it the thrill of being shown something new, something different, something the artist saw that we did not? As Pablo Picasso put it: Others have seen what is and asked why. JYUnity-tiedelehdessä: Enteroviruksen osaaja löysi luonnosta myös koronaviruksen päihittäviä molekyylejä. Ancient Earth globe. This visualization is created and maintained by Ian Webster. 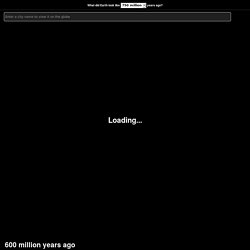 Thin-skinned solar panels printed with inkjet. Solar cells can now be made so thin, light and flexible that they can rest on a soap bubble. 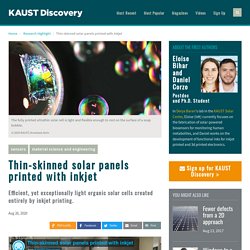 The new cells, which efficiently capture energy from light, could offer an alternative way to power novel electronic devices, such as medical skin patches, where conventional energy sources are unsuitable. “The tremendous developments in electronic skin for robots, sensors for flying devices and biosensors to detect illness are all limited in terms of energy sources,” says Eloïse Bihar, a postdoc in the team of Derya Baran, who led the research. “Rather than bulky batteries or a connection to an electrical grid, we thought of using lightweight, ultrathin organic solar cells to harvest energy from light, whether indoors or outdoors.” Human universals, human nature & human culture. The 5th Conference - Duval Union Academy.

The 5th Conference In 1912 the Belgian industrialist Ernest Solvay founded “The Solvay Conference”. 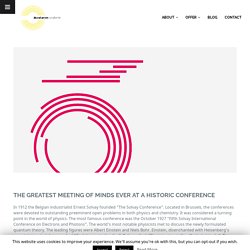 Located in Brussels, the conferences were devoted to outstanding preeminent open problems in both physics and chemistry. It was considered a turning point in the world of physics. The most famous conference was the October 1927 “Fifth Solvay International Conference on Electrons and Photons”. The world’s most notable physicists met to discuss the newly formulated quantum theory. THE 5TH CONFERENCE by Duval Union Academy is a new Belgian based large-scale industry event that creates a much-needed dialogue focused on evolutive and disruptive innovation across the ecosystem. It provides a forum to discuss the latest advancements in a specific industry that have the potential to improve outcomes, decrease costs, and reimagine this industry. 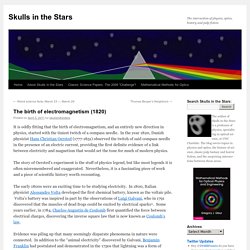 In the year 1820, Danish physicist Hans Christian Oersted (1777-1851) observed the twitch of said compass needle in the presence of an electric current, providing the first definite evidence of a link between electricity and magnetism that would set the tone for much of modern physics. The story of Oersted’s experiment is the stuff of physics legend, but like most legends it is often misremembered and exaggerated. Nevertheless, it is a fascinating piece of work and a piece of scientific history worth recounting. This Scientist Says He’s Built a Jet Engine That Turns Electricity Directly Into Thrust.

This past autumn, a professor at Wuhan University named Jau Tang was hard at work piecing together a thruster prototype that, at first, sounds too good to be true. The basic idea, he said in an interview, is that his device turns electricity directly into thrust — no fossil fuels required — by using microwaves to energize compressed air into a plasma state and shooting it out like a jet. Tang suggested, without a hint of self-aggrandizement, that it could likely be scaled up enough to fly large commercial passenger planes. Eventually, he says, it might even power spaceships. We may have spotted a parallel universe going backwards in time. By Jon Cartwright IN THE Antarctic, things happen at a glacial pace.

Just ask Peter Gorham. For a month at a time, he and his colleagues would watch a giant balloon carrying a collection of antennas float high above the ice, scanning over a million square kilometres of the frozen landscape for evidence of high-energy particles arriving from space. New Photon-Counting Camera With Record Speed and Resolution for 3D Image Capture. Researchers have developed the first megapixel photon-counting camera based on single-photon avalanche diode (SPAD) image sensors. The new camera can capture images in faint light at unprecedented speeds. Credit: Arianna M. Charbon, Kazuhiro Morimoto, Edoardo Charbon Megapixel image sensor could bring significant improvements to augmented reality and LiDAR systems for autonomous vehicles. Researchers have developed the first megapixel photon-counting camera based on new-generation image sensor technology that uses single-photon avalanche diodes (SPADs).

Neuroscientists uncover how magic mushrooms "rebalance" the brain. There's no reset button on your brain. But the more scientists learn about magic mushrooms, the more we know that they're about as close to a reset button as we can get. Psilocybin — the hallucinogenic chemical in certain mushrooms — can reshape cells in the brain, and increasingly, shows potential for treating addiction or depression.

Now, using new brain models, scientists are getting a better idea of how it all happens. Scientists constructed a model of the human brain on psilocybin, illuminating how magic mushrooms allow our brain to access untapped potential. This model shows that, under the influence of psilocybin, the brain creates a feedback loop of neuron activity and neurotransmitter release (the chemical messengers that neurons use to communicate). This finding was published Monday in Proceedings of the National Academy of Sciences. Researchers devise treatment that relieved depression in 90% of participants in small study.

Suomessa asuu kaksi kansaa. Abaababaabaababaababa… Fibonaccin sana kiehtoo matemaatikkoja. A New Theory On Time Indicates Present And Future Exist Simultaneously - SciencePhiles. The box Universe theory describes “now” as an arbitrary place in time and states that the past, the future and the present all exist simultaneously. Massachusetts Institute of Technology professor of philosophy Dr. Countries Ranked by Their Economic Complexity. In the past, the trade between nations was a much simpler matter to grasp. Product. Biodiversity Heritage Library. Birds can see the Earth’s magnetic field, scientists say, and this is how. This Single-Celled Animal Makes Complex 'Decisions' Even Without a Nervous System.

Climatic Research Unit. How Beauty Is Making Scientists Rethink Evolution. Perhaps no living scientist is as enthusiastic — or doctrinaire — a champion of Darwinian sexual selection as Richard Prum, an evolutionary ornithologist at Yale University. Watch As This Mathematician Does The Seemingly Impossible. LAMBDA - ΛCDM Theory. LAMBDA - ΛCDM Theory. There’s Growing Evidence That the Universe Is Connected by Giant Structures. The 50th anniversary of ARPANET, the internet’s predecessor. Study Shows We Are Born Creative Geniuses But The 'Education' System Dumbs Us Down? Absurd Creature of the Week: The Parasitic Worm That Turns Snails Into Disco Zombies.