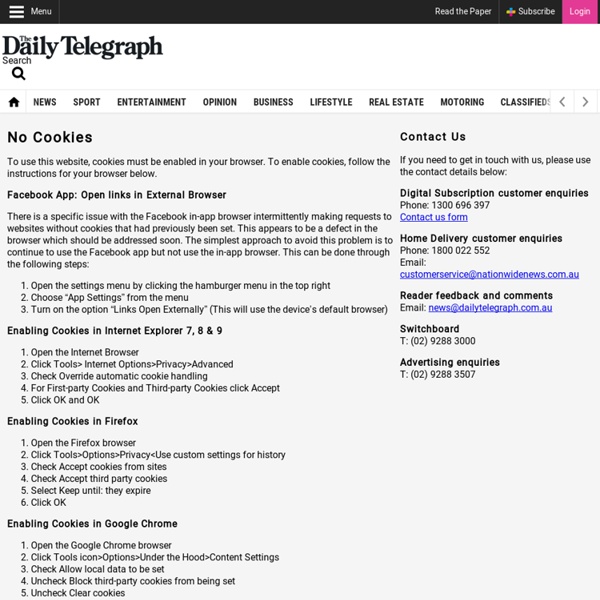 To use this website, cookies must be enabled in your browser. To enable cookies, follow the instructions for your browser below. Facebook App: Open links in External Browser There is a specific issue with the Facebook in-app browser intermittently making requests to websites without cookies that had previously been set. This appears to be a defect in the browser which should be addressed soon. The simplest approach to avoid this problem is to continue to use the Facebook app but not use the in-app browser. Open the settings menu by clicking the hamburger menu in the top right Choose “App Settings” from the menu Turn on the option “Links Open Externally” (This will use the device’s default browser) Enabling Cookies in Internet Explorer 7, 8 & 9 Open the Internet Browser Click Tools> Internet Options>Privacy>Advanced Check Override automatic cookie handling For First-party Cookies and Third-party Cookies click Accept Click OK and OK Enabling Cookies in Firefox Enabling Cookies in Google Chrome

Another tale of two cities: access to jobs divides Sydney along the 'latte line' Sydney’s so-called “latte line” divides the city in two by jobs. Specifically, our research shows residents are segregated by both overall access to jobs and access to white-collar jobs. This highlights the jobs inequality underlying residential segregation. The white-collar jobs, in general, are concentrated in the north and east of the city (above the latte line). The blue-collar jobs are mainly located in the south and west (below the line).

Four New Technologies That Will Change The Way Cancer Is Treated New approaches to tame the immune system in the fight against cancer are getting us closer to a future where cancer becomes a curable disease. Personalized vaccines, cell therapy, gene editing and microbiome treatments are four technologies that will change the way cancer is treated. Curing cancer is certainly one of the big challenges of the 21st century. Our knowledge of cancer has greatly improved in the last two decades. This has revealed the huge variability that can be found between not only different types of cancer, but also between patients with the same type of cancer. Koala rescued from traffic pole at busy Gold Coast intersection Posted about an hour agoTue 28 Aug 2018, 4:51am A koala rescued from a traffic pole on a busy south-east Queensland street has sparked concerns about the species' rapidly diminishing habitat. On a cold Saturday night, a koala clung to a traffic pole along the light rail on busy Olsen Avenue at Southport, outside the Gold Coast University Hospital. Locals stumbled across the young male, who was named Jack after the passer-by who spotted him, and called rescuers.

The radical plan to split Sydney into three Poet Kenneth Slessor called it a “dispersed and vaguer Venice”; journalist John Birmingham, a “Leviathan”. From its earliest days, Sydney has wrestled with its history as an “unplanned” but naturally blessed city, where unchecked development competes with liveability and beauty. It was only in the late 1980s, when the tourist industry poured millions of dollars into “brand Sydney”, that the balance tipped towards the beautiful and it began its current life as a place of lifestyle and spectacle, where the annual New Year’s Eve fireworks, stretching along its once-industrial harbour past the Opera House, attract 1.6 million people each year. Over these last decades, Sydney has projected an image to the world of a brash, relaxed and confidently lovely city, where locals are just as likely as tourists to embrace its restaurants-with-a-view or paid climbs over the Harbour Bridge. This inequality between centre and periphery is not peculiar to Sydney.

Behind the Scenes of a Radical New Cancer Cure An unexpected early morning phone call from the hospital is never good news. When Joy Johnson answered, her first thought was that Sharon Birzer, her partner of 15 years, was dead. Her fears were amplified by the voice on the other end refusing to confirm or deny it. Just “come in and talk to one of the doctors,” she remembers the voice saying. Johnson knew this was a real possibility. A few weeks earlier, she and Birzer sat in the exam room of a lymphoma specialist at Stanford University. Gold Coast plans to open up expanded fibre network to telcos The Gold Coast is planning to offer ISPs and backhaul providers access to its expanded fibre network in the hopes of reaping a financial reward for the Queensland city. The City of the Gold Coast is funding a $10-million expansion of its fibre network, adding a 37-kilometre loop. The council said that the new fibre loop will deliver financial benefits in excess of $2.5 million, both from cost savings as well as telco revenue. Nexium will sell capacity on the expanded network to telcos and other businesses; the City said that “several companies” are already negotiating access. The loop will cover Broadbeach, Burleigh, Varsity Lakes and Robina. The City is eyeing the potential further expansion of the network, hooking up the southern and northern parts of the Gold Coast.

Comment: Living next door to Sydney - what the West wants vs what the 'Eastern Elites' say we should get Having lived in Western Sydney for all of my 36 years, you might think I know a thing or two about my community and what we think is important. Over the last week or so, this seems to have been lost on some of the commentary club from the Eastern Suburbs who seem intent on pushing an airport onto my community, an airport that they would never accept for themselves. The realities of being left behind have been woven into the social fabric of Western Sydney for decades. Anything the East doesn't want, gets lumped on us: toxic waste, an industrial tip, a jail with 800 of Her Majesty’s most heinous house guests, and a 24-hour-a-day, seven-day-a-week airport.

These Superfoods Can Stop Cancer, Heart Disease, Obesity, And So Much More In an age where most of our food options are nutritionally deficient and loaded with fats, salts, and carbs, it’s hard to know exactly what to eat to have that well rounded and healthy diet. Introducing: Superfoods. These foods are naturally grown and loaded with important nutrients and antioxidants that fight against everything from your everyday cold to terminal diseases. If you’re looking to prevent issues like high blood pressure, obesity, high cholesterol, clogged arteries, and diabetes, a healthy diet matters most. Some simple changes to your diet and routine exercise are directly correlated to a longer, happier, and healthier life. Updated Physical Activity Guidelines for Americans Now Available - News & Events This morning at the American Heart Association Scientific Sessions, ADM Brett P. Giroir, Assistant Secretary for Health launched the second edition of the Physical Activity Guidelines for Americans. The second edition is based on the latest scientific evidence that shows that physical activity conveys even more health benefits than previously known.

theherald.com Australian representative triathlete Lorcan Redmond says he is eager to finish school and begin full-time training after placing fifth in the International Triathlon Union Junior Men’s World Championship at the Gold Coast on Saturday. Redmond, who can still compete in the junior (under-19) division next season, said Saturday’s triathlon was a tough race in difficult conditions but an experience that will leave him in good stead for future years. The 18-year-old told the Newcastle Herald he was happy with his performance but was without the “race fitness” of European competitors who were coming off their domestic racing season.

Sydney to be split into three cities "We want quality of life for all Sydneysiders," a spokesman from the commission tells CNN. The Sydney triplets would be called the Eastern Harbour City, Central River City and Western Parkland City. But how do you split a city of millions of people into three? A tale of three cities Sydney's population is set to double over the next 40 years, from 4.8 million in 2016 to eight million by 2056. With almost half of that population residing in the Eastern Harbour district, home to world famous landmarks such as Bondi Beach and the Sydney Opera House, as well as key amenities including Sydney Airport and the Central Business District, Sydney faces a huge problem of overcrowding in a concentrated area.