Centres of excellence - Covid-19 challenges New York’s future. Six experts on how we'll live, work, and play in cities after COVID-19. The Hard Truths of Trying to ‘Save’ the Rural Economy. Robert Muggah: The biggest risks facing cities. Global Trends 2030. By Xenia Dormandy Among other issues that the NIC Global Trends 2030 effort highlights is the rise of inequality associated with urbanization. 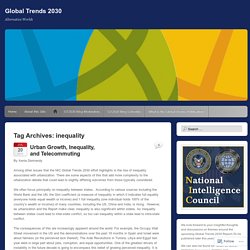 There are some aspects of this that add more complexity to the urbanization debate that could lead to slightly differing outcomes from those typically considered. We often focus principally on inequality between states. According to various sources including the World Bank and the UN, the Gini coefficient (a measure of inequality in which 0 indicates full equality (everyone holds equal wealth or income) and 1 full inequality (one individual holds 100% of the country’s wealth or income)) of many countries, including the US, China and India, is rising.

However, as urbanization and the Report make clear, inequality is also significant within states. Africa's 15 richest cities in 2030. Luanda, Angola's capital, will join Africa's club of urban economic giants, alongside Cape Town and Johannesburg. 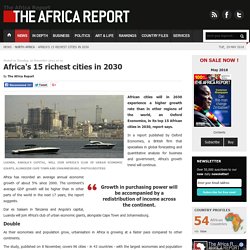 Photo©Reuters African cities will in 2030 experience a higher growth rate than in other regions of the world, an Oxford Economics, in its top 15 African cities in 2030, report says. In a report published by Oxford Economics, a British firm that specialises in global forecasting and quantitative analysis for business and government, Africa's growth trend will continue. Growth in purchasing power will be accompanied by a redistribution of income across the continent. Africa has recorded an average annual economic growth of about 5% since 2000. Dar es Salaam in Tanzania and Angola's capital, Luanda will join Africa's club of urban economic giants, alongside Cape Town and Johannesburg. MigrationReport2017 Highlights. 249459e. The city in 2030. Smart cities are already with us. 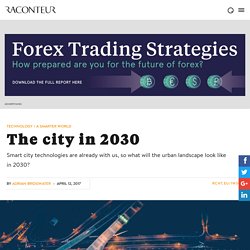 We have already brought huge advances to the way we manage our civic utilities with software-based intelligence to control civil engineering infrastructures. This insight allows workers in white shirts and ties across operations departments to perform predictive supply optimisation for us. This same insight also allows engineering staff in hard hats to perform physical predictive maintenance and keep machines online longer. 11 ICIE Chapter 5 page 43 46. People smuggling internals for john. More Anglophone African Students are Joining Universities in China than the U.S. This is from Rogue Chiefs: THE surge in the number of African students in China is remarkable. 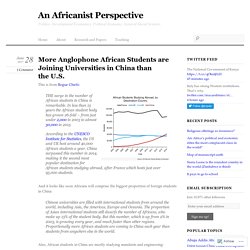 In less than 15 years the African student body has grown 26-fold – from just under 2,000 in 2003 to almost 50,000 in 2015.According to the UNESCO Institute for Statistics, the US and UK host around 40,000 African students a year. China surpassed this number in 2014, making it the second most popular destination for African students studying abroad, after France which hosts just over 95,000 students. And it looks like soon Africans will comprise the biggest proportion of foreign students in China: Chinese universities are filled with international students from around the world, including Asia, the Americas, Europe and Oceania.

Also, African students in China are mostly studying mandarin and engineering: UNHCR - South Sudan refugees in Congo make market vibrant success. Impacts of China's internal migration by keely Whittaker on Prezi. UNHCR: More displaced now than after Second World War. The total at the end of 2015 reached 65.3 million -- or one out of every 113 people on Earth, according to the United Nations High Commissioner for Refugees (UNHCR). 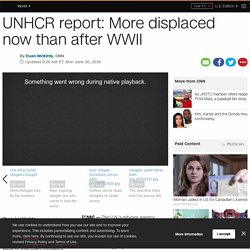 The number represents a 5.8 million increase on the year before. A little under 1% of the earth's population is either "an asylum-seeker, internally displaced or a refugee" according to the UNHCR report, which was released Monday. The report offers three main reasons for the increase in the rate of forced displacements: Titled. Confronting the Realities of Forced Migration. China Migration 4: Emigration. Tradition holds that the Chinese were a non-migratory people: 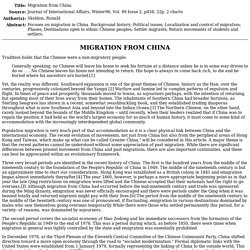 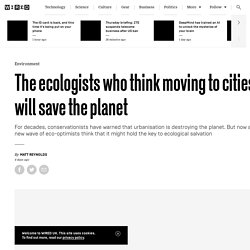 Armstrong Roberts / Stringer As far as professions go, conservationists are not known for their optimism. Empty half the Earth of its humans. It's the only way to save the planet. Discussing cities is like talking about the knots in a net: they’re crucial, but they’re only one part of the larger story of the net and what it’s supposed to do. 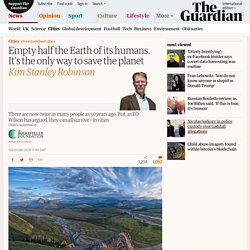 It makes little sense to talk about knots in isolation when it’s the net that matters. How do you build a healthy city? Copenhagen reveals its secrets. Maybe it’s the Viking heritage. 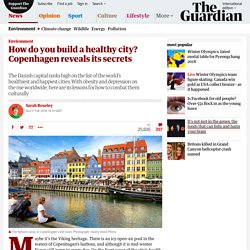 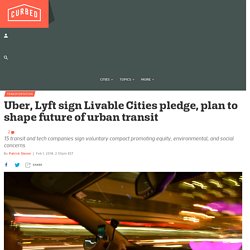 Between the race to develop autonomous vehicle technology, the growth in ride-sharing and bikesharing, and the continued refinement of electric vehicles, more companies are competing to shape the future of urban transit. Earlier today, 15 leading technology and transportation companies announced the Shared Mobility Principles for Livable Cities, a voluntary set of rules and principles meant to help steer the future of transportation towards solutions that address equity, environmental, and social concerns. Smart city Copenhagen - a living lab. The smart city Copenhagen is a living laboratory for testing smart technologies to handle the challenges of urbanisation and climate change.

Unique access to data and efficient public-private sector partnerships attract many multinationals. Greater Copenhagen is a smart city front-runner. Here, a multitude of new smart city technologies and solutions are being tested and developed across the ICT, cleantech, construction and transportation sectors. World's first integrated city data exchange. UNEP responsible consumption. Building smart transport in Moscow. Moscow addressed its road and public transit congestion problems and developed one of the world’s smartest and most-used public transportation systems. Dan Doctoroff on how we’ll realize the promise of urban innovation. To prepare cities for the future, we need to develop and deploy the services that will power them.

It will take political courage, foresight, and coordination. A convergence of digital technologies—location services, sensors, the Internet of Things—is reaching critical mass of acceptance in the digital world such that they will soon be deployed in physical spaces. But many barriers exist—including “not in my backyard” mentalities, bureaucratic misalignment, privacy concerns, a lack of funding that is only intensifying, and a lack of understanding of what’s possible.

In this Q&A, former New York City Deputy Mayor and current Sidewalk Labs Chairman and CEO Dan Doctoroff discusses what it will take to improve future cities—from political courage to flexible infrastructure that acts as a platform for development. How the water industry is going digital to boost efficiency. Smart city resilience: Digitally empowering cities to survive, adapt, and thrive. City leaders around the world are abuzz with the profound potential of incorporating smart technologies into everything from their transport infrastructure to water systems to power supply and, of course, to government services. Yangpu Waterfront: From rustbelt to brainbelt. Combating the challenges of urbanization in emerging markets: Lessons from India. India’s smart-city program offers a road map for cities working to prepare for mass urbanization with limited funds. In the next 15 years, about 200 million people will move from rural areas in India to the country’s urban centers.