Drawing. Do it yourself, 3D hand - Binnit. Photorealistic Pictures Drawn With a BIC Pen. EmailEmail At first sight they may look like some pretty sharp blue photographs, however all those pictures are actually hand drawn with a simple Bic ballpoint pen! 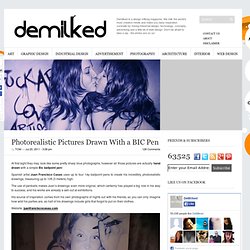 Spanish artist Juan Francisco Casas uses up to four 14p ballpoint pens to create his incredibly photorealistic drawings, measuring up to 10ft (3 meters) high. The use of penballs makes Juan’s drawings even more original, which certainly has played a big role in his way to success, and his works are already a sell-out at exhibitions. His source of inspiration comes from his own photographs of nights out with his friends, so you can only imagine how wild his parties are, as half of his drawings include girls that forgot to put on their clothes. Website: juanfranciscocasas.com. - StumbleUpon. Drawing the nose - drawing lesson. portrait tutorial. Portrait art tutorial - how to draw the nose, step-by-step drawing lesson. 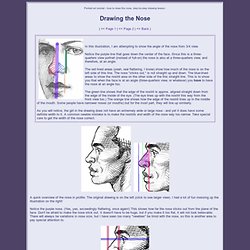 . | << Page 1 | << Page 2 | << Back | A quick overview of the nose in profile: The original drawing is on the left (click to see larger view). Drawing Machine from Stationary Bicycle. Release your creativity and get a good workout at the same time with Drawing Machine #1 by Joseph Griffiths. 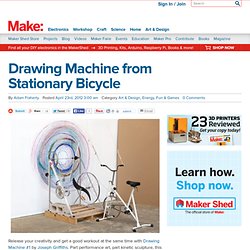 Part performance art, part kinetic sculpture, this peddle powered apparatus consists of a stationary bike that drives a series of articulated drawing implements across a canvas. Megan Fox speed drawing with charcoal by hand - ThePortraitArt. Drawing & Sketching - how to videos Drawing & Sketching. 100 Creative Drawing Ideas: An Artists Community. World Freehand Circle Drawing Champion. Google Image Result for. Google Image Result for. Drawing on Earth. Pictogram. A pictogram, also called a pictogramme, pictograph, or simply picto,[1] and also an 'icon', is an ideogram that conveys its meaning through its pictorial resemblance to a physical object. 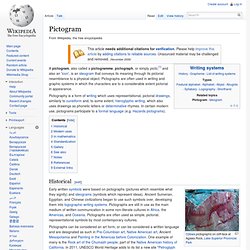 Pictographs are often used in writing and graphic systems in which the characters are to a considerable extent pictorial in appearance. Pictography is a form of writing which uses representational, pictorial drawings, similarly to cuneiform and, to some extent, hieroglyphic writing, which also uses drawings as phonetic letters or determinative rhymes. In certain modern use, pictograms participate to a formal language (e.g. Hazards pictograms). Historical[edit] Early written symbols were based on pictographs (pictures which resemble what they signify) and ideograms (symbols which represent ideas). Some scientists in the field of neuropsychiatry and neuropsychology, such as Prof. Modern uses[edit] In mathematics[edit] How to Create Wet Chalk Drawings: 7 steps (with pictures) Edit Article Edited by Flickety, Jack Herrick, Krystle, Jonathon and 31 others Chalk is a versatile drawing medium that can be used on sidewalks, walls, paper and other surfaces. 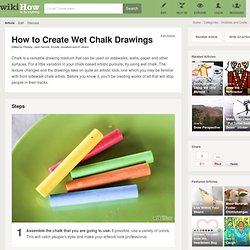 For a little variation in your chalk-based artistic pursuits, try using wet chalk. The texture changes and the drawings take on quite an artistic look, one which you may be familiar with from sidewalk chalk artists. Before you know it, you'll be creating works of art that will stop people in their tracks. Ad Steps 1Assemble the chalk that you are going to use. 7Leave the chalk to dry on its own and it'll be back to normal again. 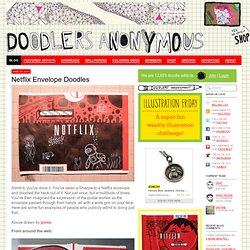 You've taken a Sharpie to a Netflix envelope and doodled the heck out of it. Not just once, but a multitude of times. You've then imagined the expression of the postal worker as the envelope passed through their hands, all with a wide grin on your face. Here are some fun examples of people who publicly admit to doing just that. Above drawn by jovino. The Biggest Drawing in the World & Man Made DIY & Keywords: art, drawing, biggest, gps. ZOMBIE PORTRAIT a drawing of a drawing of a drawing... Daily Sketches from Industrial Designer, Spencer Nugent - Page 383. Materials Guide. Pens For those starting out with their sketching, pens are a good way to getb etter faster. 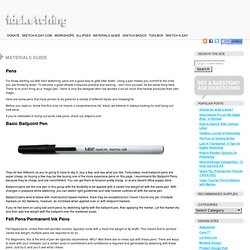 Using a pen makes you commit to the lines you are throwing down. To become a great athlete it requires practice and training…don’t fool yourself, its the same thing here. There is no such thing as a “magic pen,” there is only the designer who has worked it out so much that he/she produces their own magic. Here are some pens that have proven to be great for a variety of different styles and lineweights. Before you read on, know that this is by no means a comprehensive list. If you’re interested in trying out some new pens, check out Jetpens.com. Drawing Hair - Technique for Drawing Hair Styles. Drawing Lessons - How to Draw the Portrait - Drawing Figure - Drawing Still Life. 20 Beautiful Examples of Light Graffiti. Light graffiti, also known as light painting, is a photographic technique in which exposures are made usually at night or in a darkened room by moving a hand-held light source or by moving the camera. 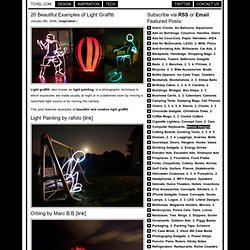 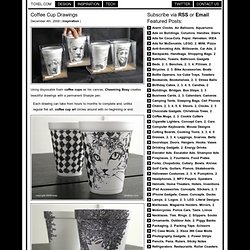 Each drawing can take from hours to months to complete and, unlike regular flat art, coffee cup art circles around with no beginning or end. Pencil vs Camera. Drawings on Dirty Car Windows. Hi folks, thanks for the comments, both positive and critical. 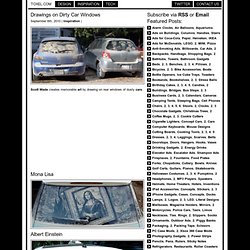 I started out with completely “natural canvasses” from driving everyday on the long dirt road I lived on at the time. The Mona Lisa/Starry Night, Ronaldinho, American Gothic- these are all examples of that. I did have to find a way to dirty the cars up myself when I started getting requests to demonstrate for media and at events, for obvious reasons. I still prefer the natural canvas, but nowadays I mostly work on prepared canvasses, as I don’t live on a dirt road anymore, and I’m very busy.

I typically work on our cars, friends cars or those provided by an event, as folks in Texas sometimes carry guns in their cars and don’t always share my enthusiasm for art… The spiritual message for me, is just in the creation of art I know won’t last beyond the next rainfall. Creative Yearbook Photos. As a yerd (yearbook nerd) and yearbook adviser for over 6 years…seen it, done it, could do much better. The things yearbook kids put out now, especially for the Pacemaker Awards, really is neck and neck with professional magazines.

Coffee Stain Art. Typewriter Art. Is drawing on money legal. One Dollar Bill Art by Atypyk. Two brilliant French artists, Ivan Duval and Jean Sebastien Ides, show us how to have fun with one dollar bill. To see more work by Atypyk, visit atypyk.com. James Charles - Pop Cultured Currency. Repurposing existing objects for other uses is always cool. Repurposing them for pop culture references though is even better. James Charles has been doing just that with United States currency for the last year or so. Many more after the jump. Pointillism. Detail from Seurat's La Parade de Cirque (1889), showing the contrasting dots of paint used in Pointillism Pointillism /ˈpɔɪntɨlɪzəm/ is a technique of painting in which small, distinct dots of color are applied in patterns to form an image.

Georges Seurat and Paul Signac developed the technique in 1886, branching from Impressionism. The term "Pointillism" was first coined by art critics in the late 1880s to ridicule the works of these artists, and is now used without its earlier mocking connotation.[1] The movement Seurat began with this technique is known as Neo-Impressionism. The Divisionists, too, used a similar technique of patterns to form images, though with larger cube-like brushstrokes.[2] Technique[edit] The technique relies on the ability of the eye and mind of the viewer to blend the color spots into a fuller range of tones. Threadless graphic t-shirt designs: cool & funny t-shirts weekly! Tees designed by the community. Drawing Board. - StumbleUpon.

Sketch Swap. FlockDraw - Free Online Drawing Tool - Collaborative Group Whiteboard. Drawspace.com - Learn to draw. Art 1. Optical Design. The Illustration &Design World of Zach Johnsen. The Elements of Drawing - Download free content from Oxford University. Sharpie installation. Utterly amazing installations by Heike Weber. She draws with permanentmarkers on acrylic floor and walls – surfaces that have reached up to 600 m2. I can’t begin to imagine how time consuming these breathtaking installations must have been.