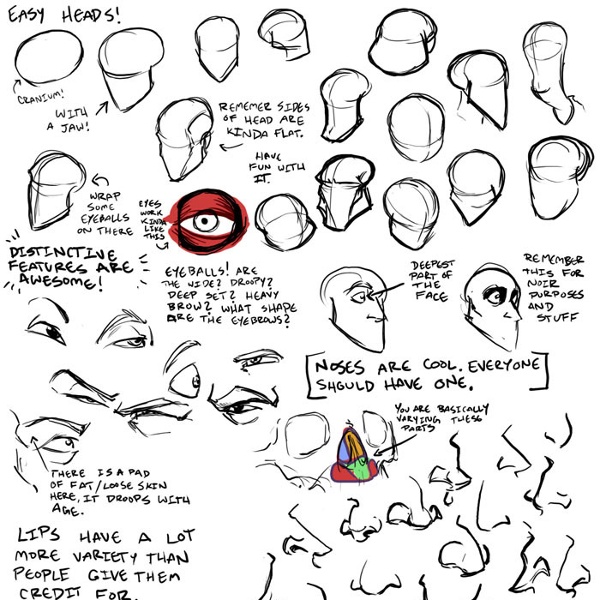 Realistic Eyes Have trouble drawing eyes? Well, you’re probably not alone. Eyes are the first thing that the viewer is drawn to in a portrait. To make sure you create a lasting impression, you need a few techniques to create a sense of realism. A quick rundown on the basics of drawing realistic eyes after the jump! expressions Boy, I didn't know what I was getting myself into when I started this. I've had requests for some sort of expressions tutorial dating back a while now, so I figured, "Sure! I can explain expression drawing...and it'll be way better than all those tutorials out there that are nothing but charts of generic expressions. Yeah! Just give me a day or two to whip something up..."

Drawing Lessons - StumbleUpon In 1988, an extraordinary thing happened in the world of animation. The film "Who Framed Roger Rabbit?"( Directed by Robert Zemekis, animation directed by Richard Williams) was released. The film gleefully celebrated the kind of imaginative slapstick cartoon violence that was the staple of the most popular short cartoon classics that were made during the period from around 1940 till the decline in the year that the film takes place,1947. Cartoon lover's eyes popped like Tex Avery wolves all over the world for this caliber of animation hadn't been seen since...well, 1947. Sculptures Popping Out of Paintings - My Modern Metropolis - StumbleUpon Oh, to have been in Tokyo in June! Shintaro Ohata just finished up a solo exhibition at the Yukari Art Contemprary in Tokyo, Japan. This Hiroshima, Japan-born artist is known for his ability to show us everyday life in a cinematic way. He captures light in his paintings, showering the world, as we know it, with carefully placed strokes of it. "Every ordinary scenery in our daily lives, such as the rising sun, the beauty of a sunset or a glittering road paved with asphalt on a rainy night, becomes something irreplaceable if we think we wouldn’t be able to see them anymore," he told Yukari gallery.

Gingerbread Heads The season of giving will be upon us in just a few short days. I love December. People start baking and sharing sweets with friends and family … even people that might not normally bake any other time of the year. There is just something about the holidays and baking for others that makes people feel good to give. I like to give fudge, pies, cake balls, cookies… cookies … and more cookies. I don’t really have a favorite kind though.

Heads (angles) The Basic Forms To draw the head from any angle you must first understand its basic structure. Look past all the distracting details and visualize the underlying forms. how to draw hands So everybody knows that the hands and the fingers are one of the hardest things to draw. So here is a personal collection of different hand references, hope to enjoy it and never stop practice. Hogarth hand poses from Iron Giant (middle of page) Mickey Mouse Hand Model Sheet by Les Clark ca. 1932 Merlin hand poses via Deja View

Lackadaisy Expressions - StumbleUpon Boy, I didn't know what I was getting myself into when I started this. I've had requests for some sort of expressions tutorial dating back a while now, so I figured, "Sure! I can explain expression drawing...and it'll be way better than all those tutorials out there that are nothing but charts of generic expressions.