7 Tutorials on How to Draw the Human Anatomy / Body / Figure 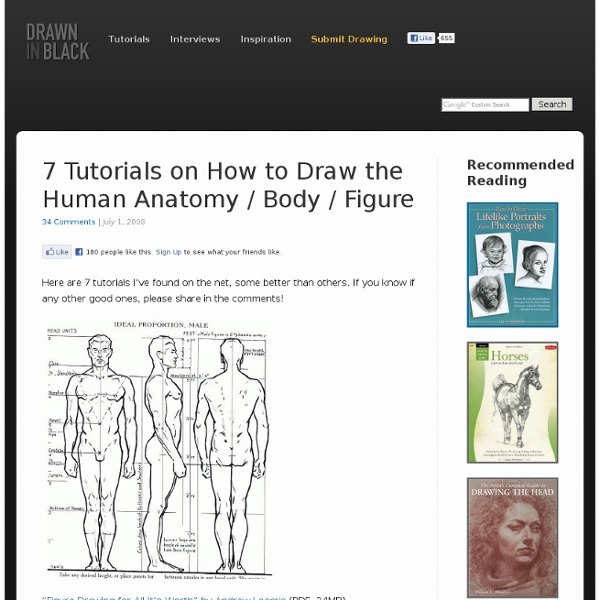 39 Comments | July 1, 2008 Here are 7 tutorials I’ve found on the net, some better than others. If you know if any other good ones, please share in the comments! “Figure Drawing for All It’s Worth” by Andrew Loomis (PDF, 24MB) One of the quintessential books by Hogarth on drawing the human figure: a must have! Big Guide to Drawing the Body by Cedarseed on deviantArt Character Drawing by Tracy Butler The Human Body by J. Human Proportions by Don Jusko Many more Youtube videos by Riven Phoenix Human Anatomy by Rey Bustos

How to Draw Clothes The most important thing to consider whenever you are drawing clothing or any type of fabric is the direction the fabric is going to be pulled in. Folds are caused wherever the fabric is being stretched or pulled; figure out how exactly you want the fabric to move, and the rest is pretty easy. Always remember to consider the figure beneath the clothing; the cloth should reveal the shape of the figure beneath. I'll go into more detail on this later. At the left are some examples of basic types of folds. Create a Pencil Drawing of a Face In this demo, I create a charcoal pencil drawing a face. If you haven't drawn a face successfully already, you may want to brush up on basics of drawing a human head before working through this page. I always say that knowing how the human head is structured sets you more at ease when drawing people. The woman I will be drawing is turning away from us toward her right side. As this is to be a pencil drawing of a face, I won't cover anything beyond her head and neck. Drawing a human face is challenging enough, and I do not want to overwhelm you with more than that.

50 Clever Tutorials and Techniques on Traditional Drawing Advertisement Traditional drawing is certainly way harder than digital and it is true that people are able to progress much faster digitally, but one should learn the traditional type of drawing and painting before starting digital drawing, since it often lays out the foundation for screen design. This article contains a mixture of traditional drawing tutorials, drawing techniques and some methods for transforming and preparing your creations for screen design. Some are intermediate level and some are advanced tutorials that include general theory, useful tips, comic inspired art, sketch a pencil drawing, coloring processing, character sketching, shapes, proportional, perspective and much more. We hope that drawing tutorials and techniques in this post will be a great help to you.

Focused Practice: An Exercise for Real Improvement in 33 days Simply sitting down and banging out a few gesture drawings every day is a great way to stay in drawing shape, but it will rarely propel you to a new level of artistic achievement. If your goal is to simply “get better,” your progress is likely to be slow and demoralizing. Studies show that people who get to be top in their field, from artists to computer programmers to Olympians, nearly all engage in focused practice on a regular basis. This means that every time they practice, they have a goal in mind. They don’t say to themselves “Be a better gymnast,” they think instead, “Add an inch to my long jump.” Different Types Of Fabric [Sketchbook Pro Tutorial] Email What’s With All The Spandex?! It can seem like every character in comics is wearing spandex. …and not just the superheroes. Because so many artists struggle with how to draw clothes, characters often appear in tight, awkward, generic jeans and t-shirts that fit like Spidey’s tights.

Current - StumbleUpon Some of the best street art has humor built into it. In the case of French street artist, OaKoAk, they take what the city gives to them and creates a witty street piece. Who hasn't wanted to turn a tile doorstep into a piano, or a sewer cover into a Viking's shield? A lot of these pieces are simple statements done very well. We like the Gameboy one especially. How to Draw Fabric Folds Tutorial by Barbara Bradley Look for Several Types of Folds Five of the seven fold types--pipe, half-lock, diaper, drop and inert--appear in the abundant cloth of this Roman's toga. The more fabric there is, the more types of folds you'll see. TYPES OF FOLDS - An Illustrated Tutorial from "Drawing People: How to Portray the Clothed Figure" by Barbara Bradley 1927-2008 - Recognized as one of the best and most inspiring teachers of drawing in the country. She was an award winning illustrator, instructor, and painter. She was also the Director of the School of Illustration at the Academy of Art University in San Francisco for twenty-five years.

How to draw hair: male Some commenters have expressed an interest in a male hair tutorial. Here ya go! Below are some cool hairstyles I found with the ever-useful Google. Lackadaisy Expressions Boy, I didn't know what I was getting myself into when I started this. I've had requests for some sort of expressions tutorial dating back a while now, so I figured, "Sure! I can explain expression drawing...and it'll be way better than all those tutorials out there that are nothing but charts of generic expressions. Yeah! Just give me a day or two to whip something up..." Um. Wall Spin, The Zatista Blog Spiral Jetty by Robert Smithson (1970), The Great Salt Lake, Utah Photo via Wikipedia Via artnet.com by Christie Chu: The Great Salt Lake in Utah, which houses Robert Smithson’s famous land work, Spiral Jetty, is facing the most critical drought in history. Water is dropping south of the lake’s historic low, set in 1963.

How to Draw Clothing Edit Article Business Casual ClothingCasual Clothinga Medieval Dressa Classic Suit Edited by Amanda, Teresa, Tasha, Maniac and 6 others You may think that drawing clothing is hard, which sometimes it can be, but if you hang in there, concentrate, and most importantly, have fun, you'll be an expert at drawing clothes in no time! Ad Steps