One Dollar Bill Art by Atypyk 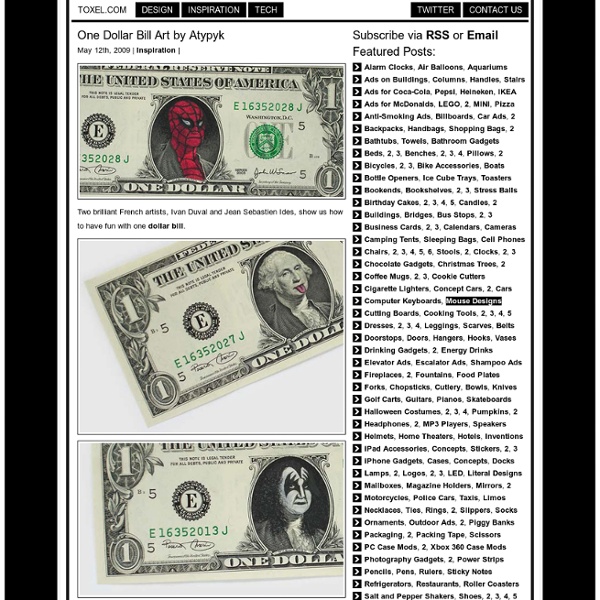 Two brilliant French artists, Ivan Duval and Jean Sebastien Ides, show us how to have fun with one dollar bill. To see more work by Atypyk, visit atypyk.com

Alfred Hitchcock's Angry Birds Reimagined Posters Olie Moss isn't the only illustrator in town to give new things a retro makeover. Flickr user Zero-lives [flickr profile] came up with a couple of movie posters for Alfred Hitchcock's The Birds, reimagined in the motif of popular iPhone game, Angry Birds. Stories from around the web

Q&A with Blake Boston (Scumbag Steve) Disclaimer: This article contains explicit language! In the past week, we’ve been talking over e-mails with Blake Boston, also known as Scumbag Steve on the Internets. Based on a Myspace picture of Blake taken circa 2006, the image macro series quickly thrived into everyone’s favorite joke about “that guy” who’s fading away in our memories of high school years, still blasting that mix CD out of his souped up Honda in school parking lot (even though he was expelled years ago). But in real life, Blake’s fictional internet fame has become a taxing ordeal for the soon-to-be father from Boston.

Were the people our parents warned us against A student fleeing from mounted police during an anti-war protest, c. 1970 50s HOME | READING LIST | NEWS | FILREIS HOME James Charles - Pop Cultured Currency Repurposing existing objects for other uses is always cool. Repurposing them for pop culture references though is even better. James Charles has been doing just that with United States currency for the last year or so. Many more after the jump. 30 Unusual and Incredible Surreal Artworks Today, we bring a collection of the most meaningful and conceptually creative surreal artworks. Surreal Art has now become a very familiar medium of art and it is growing continuously in its popularity because in this medium of art, artist has much more room to show his creativity and convey his feelings and way of thinking to his audience. Here is a collection of 30 very conceptual and momentous Surreal Artworks for you.

The Evolution of Mario Every single Mario ever made: collected here is what Mario looks like in every single game that has ever featured Mario. Scroll down to see a timeline view of Mario. His initial appearance was in the Donkey Kong arcade game of 1981, at which time he was called Jump Man. This includes every Nintendo gaming system, including rare ones such as the Game and Watch, Virtual Boy, and Stellaview. If you like this, check out the Evolution of Zelda and Link. Also, check out our other comics.

With a Passion for Skateboarding: Creative Art Sculptures by Haroshi Now that’s a sick madness! If you have never heard about Japanese wood sculptor named Haroshi, go get the wind of his most original conceptual art. As a creator of amazingly beautiful wooden sculptures out of old, crashed and broken skateboard decks, Haroshi passed for a man of considerable resourcefulness. His multicolored and meticulously sculpted art pieces simply astound with lifelike affinity, so in whichever way it’s even possible to mistake them for being real! Mark Jenkins // Street Installations Besançon Rome Rio de Janeiro 58 Breathtaking Matte Paintings by Raphael Lacoste Raphael Lacoste is a digital artist from Montreal, Canada. He studied fine arts, photography and video, and is now an art director. He worked on videogames such as Prince of Persia and Assassin’s Creed.

20 Amazing Artist-Inspired Tattoos [Editor's note: While your Flavorwire editors take a much-needed holiday break, we're revisiting some of our most popular features of the year. This post was originally published February 16, 2011.] If we’re being honest, most of us will never own a work of art by a famous artist. And while back in college, it might have been okay to pay homage to one of the greats with a poster print from the museum, these days when it comes to the artwork that hangs on our walls, we tend to opt for original pieces by emerging (read: more affordable) talents. A few enterprising souls have found a way to sidestep the issue completely by displaying famous works of art directly on their bodies. Click through for some of our favorite examples, and if you happen to have an art-inspired tattoo, be sure to tell us about it in the comments.

Mountains of Books Become Mountains I thought I’d seen every type of book carving imaginable, until I ran across these jaw dropping creations by Guy Laramee. His works are so sculptural, so movingly natural in their form, they’ve really touched me. His works are inspired by a fascination with so-called progress in society: a thinking which says the book is dead, libraries are obsolete and technology is the only way of the future.