Collection of videos and other materials for teaching Pronunciation in English

Pronunciation: The words 'was' and 'were' Learn British accents and dialects – Cockney, RP, Northern, and more! 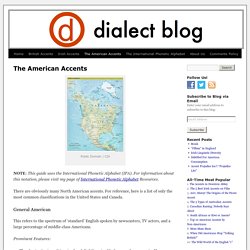 For information about this notation, please visit my page of International Phonetic Alphabet Resources. There are obviously many North American accents. For reference, here is a list of only the most common classifications in the United States and Canada. General American This refers to the spectrum of ‘standard’ English spoken by newscasters, TV actors, and a large percentage of middle-class Americans.

Prominent Features: The short-a (as in cat) is raised and diphthongized before nasal consonants. Accent Samples: Eastern New England English This describes the classic “Boston Accent.” New York City English One of the more famous American accents, the classic “New Yorkese” has been immortalized by films (“Goodfellas,” “Marty,” and “Manhattan,” among countless others), TV shows (“All in the Family,” “Seinfeld,” “King of Queens”) and plays (“A View from the Bridge,” “Lost in Yonkers,” “Guys and Dolls”).

Conclusion. Rachel's English. How to say HELLO! Greet Americans! English Pronunciation. Learning English pronunciation. Cork English Teacher. Sounds-of-english. Pronunciation: 3 Principles On How To Make Your Spoken English Sound More Natural – A Guest Post. I recently had the privilege and honour of being interviewed by my fellow English Language trainer, Elena Mutonono on her recent webinar “Accent Training for Business People“. For those of you who didn’t sign up for the webinar, here’s the recording.

In that webinar we discussed the benefits of accent training for non-native business people and how accent training improves communication. I asked Elena, a pronunciation expert, to write a guest post for me to share her three tips on how you can make your spoken English sound more natural. I am delighted to pass the baton over to Elena for this week’s post. Elena Mutonono I remember a few years ago I went to a beauty salon in New Orleans and was served by a nice lady from Brazil. The intonation and the word stress sounded to me as though I was watching a Brazilian soap opera without translation where one good sister loses the love of her life, and the other one steals him.

What was worse is I felt ashamed that I couldn’t talk to this lady. Understanding that Hillbilly Accent. The Primary Differences Among Major International English Dialects. The British Empire hasn’t been in existence for almost three-quarters of a century. At the peak of its might, it covered close to a quarter of the world’s land area and ruled a fifth of its population. But the empire changed, transformed, and passed as all things pass. When the territories Britain had conquered gained freedom, there was one thing that remained as evidence of how grand the empire once was—the English language.

It’s the second most common language in the world in terms of the number of native speakers; it’s the most widely spoken language of all when you include people who use it as a second language. It’s an international language, and as such, it has developed various dialects around the world. 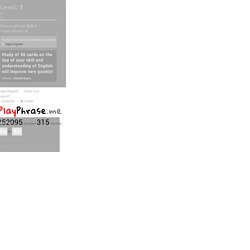 The purpose of PlayPhrase.me service is to learn english using TV series. We create video sequence from scenes that contain the word you search for. As soon as you submit your search query, the phrase list is returned and phrase list are played automatically. When we write correctly, we don't recall all the grammer and spelling rules, we just feel what's right. We've heard, read and seen a huge amount of examples of that phrase usages, and "feel" how it should be written and pronounced. This works exactly the same with a foreign language. We've sorted the phrases in such a manner that course will start with the most commonly ones used in TV shows and movies. At the very beginning, you'll understand only some of the sentences' parts. After you log into the system, you'll see the first phrase offered for learning in the left column.

To change the translation language, click on the gray button in the upper-right corner. PRONUNCIA INGLESE PER ITALIANI. British English vs American English!!