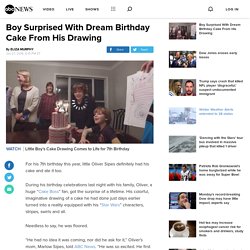 During his birthday celebrations last night with his family, Oliver, a huge “Cake Boss” fan, got the surprise of a lifetime. His colorful, imaginative drawing of a cake he had done just days earlier turned into a reality equipped with his “Star Wars” characters, stripes, swirls and all. Needless to say, he was floored. “He had no idea it was coming, nor did he ask for it,” Oliver’s mom, Marlow Sipes, told ABC News. “He was so excited. Twin 4-Year-Old Girls' Hulk Princess Birthday Cake Smashes Sweet Stereotypes Man Finds Grandparents' 100-Year-Old Wedding Cake Inside a Hatbox in Garage The little boy’s wild imagination turned into reality thanks to his father’s coworker and baking enthusiast, Alyvia Munos, who loved taking on the challenge.

“It was definitely one of the most fun cakes I’ve ever made,” said Munos, who is receiving lots of praise online for her depiction. Smelly Screens & Moving Seats At The UK's First 4DX Cinema. How russians learn english. Antarctica for Kids: Cool Facts About Antarctica for Children - FreeSchool. How to prepare the deadly pufferfish shown by "Uosei" chef Rikizo Okamoto. Vermilion mark. 10 Weirdest Sports You've Probably Never Heard Of.

Shooting the Everlasting Storm. 15 Things You Didn't Know About HARRODS. He Spent 40 Years Alone in the Woods, and Now Scientists Love Him. Wild Camping on Dartmoor. A Day in the Life of a Primary School Teacher. Pink Floyd - Another brick in the wall (part II) - tekst piosenki, tłumaczenie piosenki, teledysk na Tekstowo.pl. [Intro] You, Yes You! 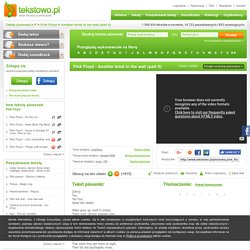