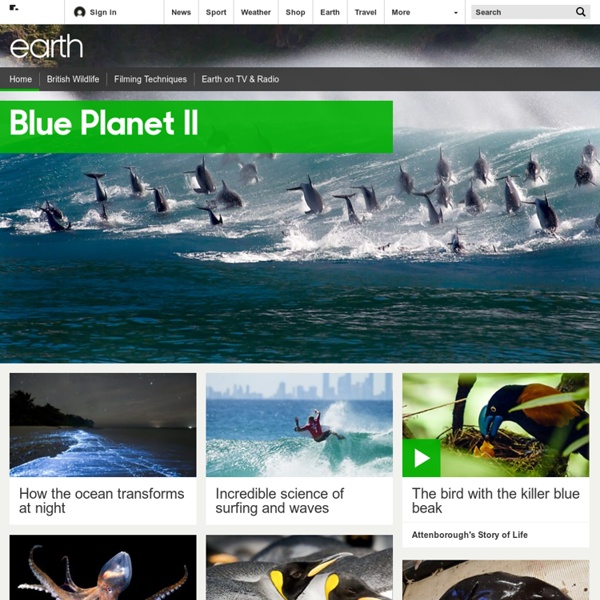 Glass Beach – Nature Corrects Another of Our Mistakes No one would have believed in the last years of the nineteenth century that a rubbish dump being created would, in the space of a century, become a protected area. Yet that is exactly what happened to what has come to be known as Glass Beach, just outside Fort Bragg in California. The residents there had no refuse collection so, with the sea so close by the solution seemed obvious – throw the garbage over the edge of the cliffs above their local beach.

Introduction to Evolutionary Biology Introduction to Evolutionary Biology Version 2 Copyright © 1996-1997 by Chris Colby[Last Update: January 7, 1996] volution is the cornerstone of modern biology. It unites all the fields of biology under one theoretical umbrella. It is not a difficult concept, but very few people -- the majority of biologists included -- have a satisfactory grasp of it. One common mistake is believing that species can be arranged on an evolutionary ladder from bacteria through "lower" animals, to "higher" animals and, finally, up to man. Mistakes permeate popular science expositions of evolutionary biology.

Universal Design for Learning Visually Explained for Teachers May 6, 2015 Universal Design for Learning is a framework for learning that includes all students. Being grounded in socio-cultural theory, UDL views learning environments and social interactions as being key elements in development and learning. In UDL students are allowed to express their learning in a variety of ways. The key principles driving UDL include flexibility, simple and intuitive instruction, multiple means of presentation, success oriented curriculum, appropriate level of student effort, and appropriate environment for learning. The infographic we have for you today provides an excellent explanation of what Universal Design for Learning is all about. We invite you to check it out and share with us your thoughts

Saihō-ji (Kyoto) Golden Pond, in the center of the moss garden. Saihō-ji (西芳寺?) is a Rinzai Zen Buddhist temple located in Matsuo, Nishikyō Ward, Kyoto, Japan. The temple, which is famed for its moss garden, is commonly referred to as "Koke-dera" (苔寺?), meaning "moss temple", while the formal name is "Kōinzan Saihō-ji" (洪隠山西芳寺?). Scientists Uncover How Dainty Rhino Feet Support Huge Bodies How do rhinos' dainty little pigeon-toed feet support their portly bodies? A group of veterinary scientists in the United Kingdom are on the case. By coaxing three white rhinos to walk back and forth across a "pressure pad," a floor mat embedded with thousands of pressure sensors, the researchers are collecting data on how much force the beasts exert on different parts of their feet as they walk. A rhinoceros can weigh as much as 8,000 pounds (3,600 kilograms), yet somehow, their feet manage to take all those tons in stride. Initial results show that, with each step, their toes feel peak pressures of 75 pounds per square inch (psi), and the pads of their feet, 15 psi. That's not so much.

The Brain—Information about the Brain 1 Introduction “I think, therefore I am.” —René Descartes, 17th-century philosopher Few of us question the crucial importance of the brain. It is vital to our existence. ARKive - Discover the world's most endangered species Wildscreen's Arkive project was launched in 2003 and grew to become the world's biggest encyclopaedia of life on Earth. With the help of over 7,000 of the world’s best wildlife filmmakers and photographers, conservationists and scientists, Arkive.org featured multi-media fact-files for more than 16,000 endangered species. Freely accessible to everyone, over half a million people every month, from over 200 countries, used Arkive to learn and discover the wonders of the natural world.

List of national parks - Wikipedia This is a list of national parks as defined by the International Union for Conservation of Nature ordered by nation. Nearly 100 countries around the world have lands classified as a national park by this definition. Note that this article links to list articles of national parks by country on Wikipedia in the "Country" column in the tables. Africa[edit] Asia[edit] Brain's connective cells are much more than glue: Glia cells also regulate learning and memory Glia cells, named for the Greek word for "glue," hold the brain's neurons together and protect the cells that determine our thoughts and behaviors, but scientists have long puzzled over their prominence in the activities of the brain dedicated to learning and memory. Now Tel Aviv University researchers say that glia cells are central to the brain's plasticity -- how the brain adapts, learns, and stores information. According to Ph.D. student Maurizio De Pittà of TAU's Schools of Physics and Astronomy and Electrical Engineering, glia cells do much more than hold the brain together.

Oldest Evidence of Life on Earth Possibly Found in Australian Rocks Ancient rocks found in a remote stretch of Western Australia may contain the world's oldest known evidence of life on land, a new study finds. The 3.48-billion-year-old rocks are part of an area known as the Dresser Formation, located in Pilbara, Australia. During Earth's early years, the region might have been a volcanic caldera (a volcanic crater often resulting from an eruption) on a small island dotted with hot springs and ponds that were teeming with microbial life, said study lead author Tara Djokic, a doctoral candidate in geosciences at the University of New South Wales in Australia. Djokic and her colleagues found signs of microbial life embedded in rocks that form around hot springs, as well as in deposits in the ancient hot springs themselves. Error loading player: No playable sources found