20 words that once meant something very different 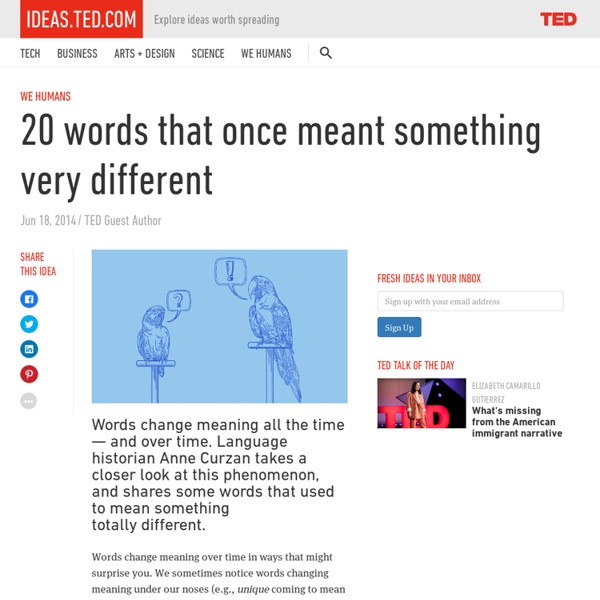 Words change meaning over time in ways that might surprise you. We sometimes notice words changing meaning under our noses (e.g., unique coming to mean “very unusual” rather than “one of a kind”) — and it can be disconcerting. How in the world are we all going to communicate effectively if we allow words to shift in meaning like that? The good news: History tells us that we’ll be fine. Words have been changing meaning — sometimes radically — as long as there have been words and speakers to speak them. Here is just a small sampling of words you may not have realized didn’t always mean what they mean today. Nice: This word used to mean “silly, foolish, simple.” We’re human. Watch Anne Curzan’s TED Talk to find out what makes a word “real”.

Mouth clicks used in human echolocation captured in unprecedented detail Like some bats and marine mammals, people can develop expert echolocation skills, in which they produce a clicking sound with their mouths and listen to the reflected sound waves to "see" their surroundings. A new study published in PLOS Computational Biology provides the first in-depth analysis of the mouth clicks used in human echolocation. The research, performed by Lore Thaler of Durham University, U.K., Galen Reich and Michael Antoniou of Birmingham University, U.K., and colleagues, focuses on three blind adults who have been expertly trained in echolocation. Since the age of 15 or younger, all three have used echolocation in their daily lives. They use the technique for such activities as hiking, visiting unfamiliar cities, and riding bicycles. While the existence of human echolocation is well documented, the details of the underlying acoustic mechanisms have been unclear.

How we discovered three poisonous books in our university library Some may remember the deadly book of Aristotle that plays a vital part in the plot of Umberto Eco’s 1980 novel The Name of the Rose. Poisoned by a mad Benedictine monk, the book wreaks havoc in a 14th-century Italian monastery, killing all readers who happen to lick their fingers when turning the toxic pages. Could something like this happen in reality? Poisoning by books? Internecine - Language errors of the rich and famous We the people of the United States, in order to form a more perfect union, establish justice, insure domestic tranquility, provide for the common defense, promote the general welfare, and secure the blessings of liberty to ourselves and our posterity, do ordain and establish this Constitution for the United States of America. —Preamble to the United States Constitution, 1787 Most of us, whether we realize it or not, have been taught something of absolute adjectives. These are words which permit no variation of degree; something either is this adjective, or it is not, and there is no wiggle room. The subject has been given considerable attention over the years, as people who care very much about the state of our language have come to the defense of words such as perfect, unique, and supreme, on the grounds that they should not be modified. Yet many writers over the years, including the authors of the United States Constitution, have seen fit to fudge many of these absolute adjectives.

139 Old Norse Words That Invaded The English Language When I say “Old English” what comes to mind? The ornate, hard-to-read script? Reading Beowulf in your high school English class? The kinds of figurative compound nouns – or kennings – like “swan of blood” and “slaughter-dew” that have sustained heavy metal lyrics for decades? Old English, also known as Anglo-Saxon, was a language spoken by the Angles and the Saxons – the first Germanic tribes to settle the British Isles. They were not the first inhabitants, as any Welsh or Gaelic speaker will tell you, but their language did form the basis for the Angle-ish we speak today.