Arabian coins found in US may unlock 17th-century pirate mystery. A handful of coins unearthed from a pick-your-own-fruit orchard in the US state of Rhode Island and other random corners of New England may help solve a centuries-old cold case. 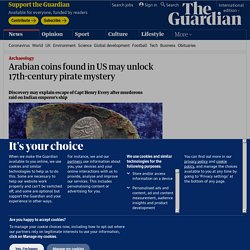 The villain in this tale: a murderous English pirate who became the world’s most-wanted criminal after plundering a ship carrying Muslim pilgrims home to India from Mecca, then eluded capture by posing as a slave trader. Jim Bailey, an amateur historian and metal detectorist, found the first intact 17th-century Arabian coin in a meadow in Middletown. That ancient pocket change – the oldest ever found in North America – could explain how pirate Capt Henry Every vanished. On the Margins of Society: the Roma Community Through Josef Koudelka’s Lens. Between 1962 and 1971, Josef Koudelka worked in Czechoslovakia, Romania, Hungary, France and Spain capturing the precarious lives of Romani people, an ethnic group who have traditionally lived as travelers since as early as the 12thCentury: most commonly in the central, eastern and southern regions of Europe. 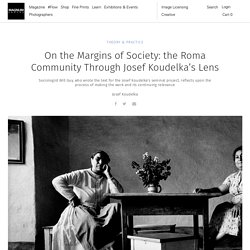 Nowadays referred to as Roma, they have historically been grouped together with other communities, such as the Sinti, under the collective descriptor of ‘gypsy’, a term now considered pejorative in much of the world. As a result of their geographic dispersion and frequent marginalization by states, figures for total populations are broad estimates, lying between 2 and 20 million globally. These communities have historically been entrapped in poverty, and victim to systemic racism and discrimination: exploited through enslavement during medieval times, and marked for extermination and imprisonment in occupied Europe during World War II. Royal Geographical Society - Search our Collections. Decolonisation + Democratisation. The Slave Trade and the British Empire: an audit of commemoration in Wales. Dire Wolves Were Not Really Wolves, New Genetic Clues Reveal. Dire wolves are iconic beasts. 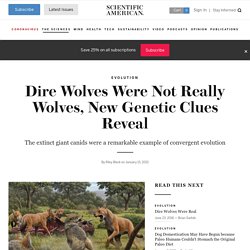 Thousands of these extinct Pleistocene carnivores have been recovered from the La Brea Tar Pits in Los Angeles. And the massive canids have even received some time in the spotlight thanks to the television series Game of Thrones. But a new study of dire wolf genetics has startled paleontologists: it found that these animals were not wolves at all, but rather the last of a dog lineage that evolved in North America. Ever since they were first described in the 1850s, dire wolves have captured modern humans’ imagination. Their remains have been found throughout much of the Americas, from Idaho to Bolivia. The new study, published on Wednesday in Nature, began as an effort to understand dire wolves’ biological basics.

One of the researchers’ questions was how dire wolves were related to other wolves. But the new evidence told a different story. Nor did dire wolves leave a genetic legacy beyond the decaying DNA in their ancient bones. Restitution, Repatriation, and Decolonization: What's Next For "Brutish Museu... The Despicable History of Imperial Food and Drink Still Casts A Shadow Today. Stephen Colegrave delves into the dark colonial past and historic human cost of the products Brits can’t seem to live without When I was a child in the 1960s, I used to visit the British Empire every weekend when I went to my great aunts’ farm. 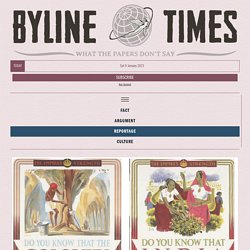 My aunts were both born in the 19th Century and had been presented to court before the First World War. Se connecter à Facebook. Australian Wildfires Uncovered Hidden Sections of a Huge, Ancient Aquaculture System - Gastro Obscura. In Victoria, Australia, an ancient labyrinth of waterways snakes across a once-volcanic landscape. 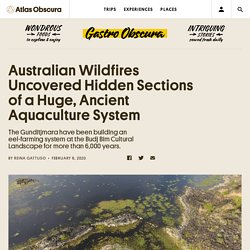 This is the Budj Bim Cultural Landscape, a vast aquacultural system the Gunditjmara Aboriginal people, who still call this country home, began constructing 6,600 years ago. Parts of the system are still in use today. Ask locals about Budj Bim, and you’ll invariably be directed to Uncle Denis Rose. The Tragedy of Corbynism. Photograph Source: YouTube/RevolutionBahrainMC – CC BY-SA 4.0 Corbyn’s election as leader of Labour party in 2015 was seen by much of the British left as their best chance to reverse the neoliberal imperialist trajectory of the British state for at least a generation. 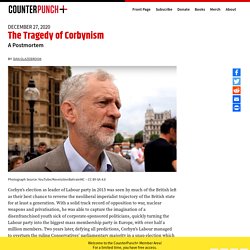 With a solid track record of opposition to war, nuclear weapons and privatisation, he was able to capture the imagination of a disenfranchised youth sick of corporate-sponsored politicians, quickly turning the Labour party into the biggest mass membership party in Europe, with over half a million members. Why Do So Many Weird Animals Live in Australia? Maybe you live in Australia; or, you’ve never set foot on the country-continent. 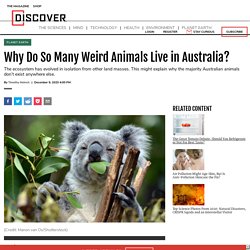 Regardless, you may have asked why the land Down Under holds a sort of ecological monopoly on weird creatures. We’re looking at you wombat, kangaroo, koala bear, Tasmanian devil, thorny devil lizard — also, what’s with all the devils? It doesn’t take a Ph.D. to notice the uncanny concentration of odd animals. But, if you look at the animal science and data, well, this landmass starts to look even weirder. Or, exceptional might be a better word for it. Out of 300-some terrestrial mammal species in Australia, nearly 90 percent of them are found only in Australia (barring captivity and human introduction elsewhere). (Credit: NicoElNino/Shutterstock) Check out a world map, with this isolated continent surrounded by blue, and you may be able to guess at the best explanation for Australia’s biodiversity and eco-autonomy. Tiny Pouch Babies. The Revolutionary Humanism of Frantz Fanon.

June 2. On June 2, 1924, Congress enacted the Indian Citizenship Act, which granted citizenship to all Native Americans born in the U.S. 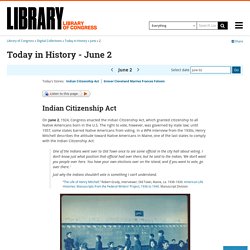 The right to vote, however, was governed by state law; until 1957, some states barred Native Americans from voting. In a WPA interview from the 1930s, Henry Mitchell describes the attitude toward Native Americans in Maine, one of the last states to comply with the Indian Citizenship Act: One of the Indians went over to Old Town once to see some official in the city hall about voting. I don’t know just what position that official had over there, but he said to the Indian, ‘We don’t want you people over here. Studio B, Unscripted: With Priyamvada Gopal and George the Poet. How Profits From Slavery Changed the Landscape of the Scottish Highlands. Between roughly 1750 and 1860, wealthy landowners forcibly evicted thousands of Scottish Highlanders in order to create large-scale sheep farms. 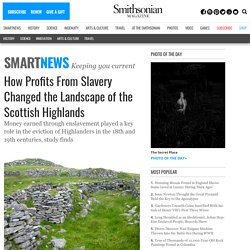 Known today as the Highland Clearances, this era of drastic depopulation sparked the collapse of the traditional clan system and the mass migration of Scotland’s northernmost residents to other parts of the world. As Alison Campsie reports for the Scotsman, new research argues that this pivotal period in Scottish history had close ties to the enslavement of people in British colonies, with a cadre of individuals enriched by slavery evicting at least 5,000 people from their property and buying up more than one million acres of land relinquished during the clearances. Iain MacKinnon of Coventry University and Andrew Mackillop of the University of Glasgow detailed their findings in a discussion paper published by Community Land Scotland, a nonprofit that represents the country’s community landowners.

Atlasobscura. At the end of a restaurant meal, deciding who pays and how much can be fraught. 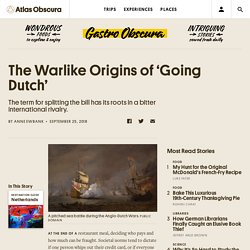 Societal norms tend to dictate if one person whips out their credit card, or if everyone should “go Dutch”: that is, pay their own share. The injustice of slavery is not over: the graves of the enslaved are still be... It should come as no surprise that centuries of amnesia towards Britain’s own history has left us with a lot to learn. My personal school education during the 1990s contained a gaping hole between the Tudors and the second world war. If you wanted to surgically remove the period of colonial expansion and transatlantic enslavement, you’d struggle to beat it. So those of us with time, resources and motivation are left to bridge the void through self-education, which often involves grappling with significant facts and figures. The numbers of Africans estimated to have been trafficked by Europeans to their American and Caribbean colonies: 12 million-plus. Deaths on the Middle Passage alone, across the Atlantic: 1.5 million at a highly conservative estimate.

So the four centuries of African enslavement by Europeans remains an abstract story. V&A in talks over returning looted Ethiopian treasures in 'decolonisation' pu... The Victoria and Albert Museum in London has started talks with the Ethiopian embassy over returning looted treasures in its collections, including a gold crown and royal wedding dress, taken from the country more than 150 years ago. Ethiopians have campaigned for the return of the items since they were plundered after the 1868 capture of Maqdala in what was then Abyssinia. Ethiopia lodged a formal restitution claim in 2007 for hundreds of important artefacts from Maqdala held by various British institutions, which was refused. Facebook. Ben & Jerry's - Happy World Refugee Day! Today, we stand... Groupe public Stand Up to Racism West Wales Forum. Black History Month Wales.

Groupe public Stand Up to Racism West Wales Forum. Colonialism and Labour – from Attlee to Gaitskell – Labour Hub. By Adam Peggs. Groupe public Stand Up to Racism West Wales Forum. Black Britannia: the Asian Youth Movements Demonstrated the Potential for Ant... When reflecting on the legacy of Black Radicalism in Britain, few would expect to see the inclusion of the Asian Youth Movements (AYM) in its history. However, the AYMs played a vital role in the fight waged against systemic racism. The Asian activists who organised during the 1970s and 80s, were, through their anti-racist politics and Black self-identification, part of the wider Black Power movement, which saw Afro-Caribbean and South Asian migrants build strong networks of solidarity in the face of British racism.

The history of the movement not only demonstrates the power of community mobilisation and direct action, but also shows the advantages of political Blackness, a principle that has since been replaced by the ethnic nationalism we see today. Emma Dabiri: Pretending racism doesn’t exist doesn’t make it go away. Following the killing of George Floyd on May 25th, US cities erupted in flames. This fire was not one that could be contained by national borders. Universities, Race and Slavery: From Liverpool to Lampeter – Dr Alex Scott UW... 1919 Race Riots Open Access Syllabus. Taking down statues isn't erasing history—it's making history, literally.