Virtual failure in commercial terms but who cares? Steve albini. The Manual by The KLF. KLF PUBLICATIONS, BOX 283, HP22 5BW KLF PUBLICATIONS IS A KLF COMMUNlCATIONS COMPANY KLF COMMUNICATIONS 1988 FIRST PUBUSHED 1988 THIS BOOK IS SOLD SUBJECT TO THE CONDITION THAT IT SHALL NOT BY WAY OF TRADE OR OTHERWISE BE LENT, RESOLD, HIRED OUT OR OTHERWISE CIRCULATED WITHOUT THE PUBLISHER’S PRIOR CONSENT IN ANY FORM OF BINDING OR COVER OTHER THAN THAT IN WHICH IT lS PUBLISHED AND WITHOUT A SIMILAR CONDITION INCLUDING THIS CONDITION BEING IMPOSED IN THE SUBSEOUENT PUBLISHER. 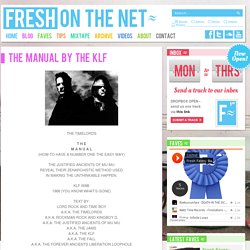 GUARANTEE – HOW TO OBTAIN IT WE GUARANTEE THAT WE WILL REFUND THE COMPLETE PRICE OF THIS MANUAL IF YOU ARE UNABLE TO ACHIEVE A NUMBER ONE SINGLE IN THE OFFICIAL (GALLUP) U.K. CHARTS WITHIN THREE MONTHS OF THE PURCHASE OF THIS MANUAL AND ON CONDITION THAT YOU HAVE FULFILLED OUR INSTRUCTIONS TO THE LETTER. TO RECEIVE THIS GUARANTEE PLEASE WRITE TO KLF PUBLICATIONS, BOX 283, HP21 7HG, U.K. WITH YOUR NAME, ADDRESS AND A PHOTOCOPY OF YOUR PURCHASE RECEIPT AND AN S.A.E. In parts of this manual we will patronise you. 1. John Cale - Do Not Go Gentle Into That Good Night. John Cale - Do Not Go Gentle Into That Good Night. Best Indie Albums - motel de moka. Creating any ‘best of list‘ is always problematic, not only aesthetic judgement employed but also its effect. Often, a credible enough list can defeat the original point of a list, a bit like reciting unmentionable magic spell.

The secret magic is broken the minute it is made public. That is the case with early indie list in the 80′s when often cited innovative indie bands ultimately transformed, became part of major labels and fueled the most profitable era of recording industry. All this could easily be a silly weekend musing about economics, rebellion, love, and freedom were it not for current popular music scene. What is now the last four remaining major labels (Universal, Sony, Warner Music, EMI) control some 80% of global market share in 2005 (1) and very much dictate how mass entertainment is presented. The 60′s 001. The 70′s 019. The 80′s. The look of music. When it comes to classical music competitions, one could be forgiven for thinking how well someone plays is the single most important factor. 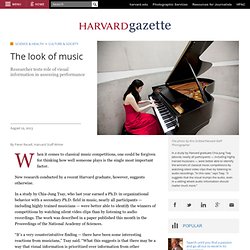 New research conducted by a recent Harvard graduate, however, suggests otherwise. In a study by Chia-Jung Tsay, who last year earned a Ph.D. in organizational behavior with a secondary Ph.D. field in music, nearly all participants — including highly trained musicians — were better able to identify the winners of competitions by watching silent video clips than by listening to audio recordings. The work was described in a paper published this month in the Proceedings of the National Academy of Sciences. “It’s a very counterintuitive finding — there have been some interesting reactions from musicians,” Tsay said. “What this suggests is that there may be a way that visual information is prioritized over information from other modalities. “For the last two decades, I’ve taken part in various competitions,” she said. Instrumental Walking music. 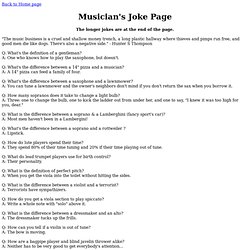