Working through Living in the Office

A Productivity Tip To Use Every Day. What would you get done if you only had until 10:30 a.m. to work today? 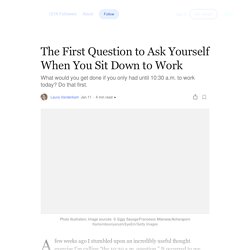 Do that first. A few weeks ago I stumbled upon an incredibly useful thought exercise I’m calling “the 10:30 a.m. question.” It occurred to me when my part of Pennsylvania got hit with a heavy winter storm one Wednesday. The forecast called for snow, heavy winds, and ice, and the power company warned of potential outages. The New Bar Team Playbook. Now more than ever, the bar industry needs leaders who inspire, motivate and create a strong sense of team culture. 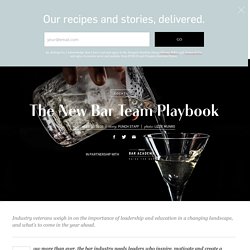 Diageo Bar Academy offers immersive training programs for bar professionals across the globe, including a free masterclass on November 25th, on how to lead effectively during this challenging time. Despite the upheaval and chaos of the pandemic era, one thing hasn’t changed: Bar professionals still want to be successful in their industry. Replace Your To-Do List With Interstitial Journaling To Increase Productivity.

Inside Amazon's Very Weird, Yet Efficient Staff Meetings. People Share 30 Worst Job Interview Stories And Personal Experiences, And Some Are Hard To Imagine. You’ve all heard tips for what you should definitely not do in a job interview, like saying that your biggest weakness is your perfectionism, or neglecting to skim through the company’s website beforehand so you’re left asking what it is they do, anyway. 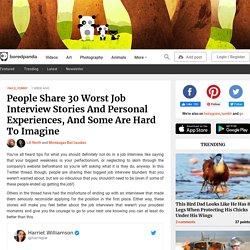 In this Twitter thread, though, people are sharing their biggest job interview blunders that you weren’t warned about, but are so ridiculous that you shouldn’t need to be (even if some of these people ended up getting the job!) Others in the thread have had the misfortune of ending up with an interviewer that made them seriously reconsider applying for the position in the first place. 22 Odd Questions I Get Asked At Job Interviews. I am a graphic designer who work in NYC. 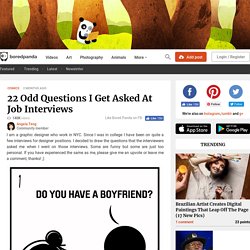 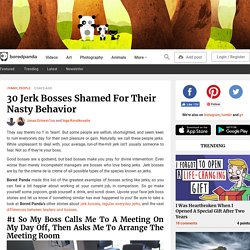 But some people are selfish, shortsighted, and seem keen to ruin everyone’s day for their own pleasure or gain. Naturally, we call these people jerks. While unpleasant to deal with, your average, run-of-the-mill jerk isn’t usually someone to fear. Not so if they’re your boss. Good bosses are a godsend, but bad bosses make you pray for divine intervention. Man Can’t Help But Think He Played Small Part In Female Coworker’s Success By Not Actively Sabotaging Her Career. SAN FRANCISCO—Beaming with pride as he recalled the support he gave coworker Laura Wolff when he refrained from taking full credit for a joint project, advertising copywriter Ken Appleby said Monday he sincerely believes his non-undermining behavior contributed significantly to the female colleague’s success. 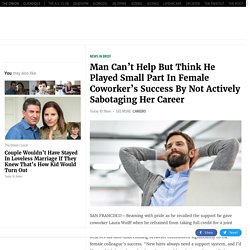 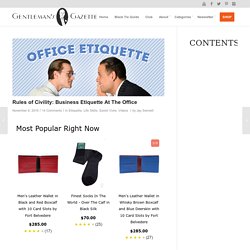 More than one-quarter of respondents’ co-workers fell into this downright rude category. In this guide to business etiquette in the office, we will show you what your coworkers dislike, how you can improve your manners and you can approach coworkers about problems. Do we save manners for our personal lives? Stress management in the work place [infographic] 19 Amazing Vintage Photos That Show How People Worked Before AutoCAD. We here at Bored Panda really love finding some interesting facts from our past, preferably together with some vintage photos to illustrate them. This time we’d like to share with you how an essential profession – the drafting technician – looked like before computers began their reign.

A drafting technician may work in many spheres – from architecture to manufacturing and is responsible for engineering drafts, architecture drawings, and house plans. To put it simply – no structure is ever built without them. Technological advances cause some professions to cease to exist, but in the case of drafting technicians, it just made their desks smaller and tidier. AutoCAD was released in 1982, and by 1994 as many as 750 training centers had been using it worldwide. A look at the demanding schedule of Elon Musk, who works in 5-minute slots, skips breakfast, and largely avoids emails. 10 Questions to Ask in a Job Interview. People Think Being A Veterinarian Is Just Playing With Cute Animals All Day, But I Also Get To Kill Them. Boss’ Brilliant Response To Employee Asking For Mental Health Day Off Goes Viral.

A web developer named Madalyn Parker recently took a few days off from work to focus on her mental health. 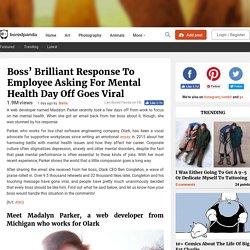 When she got an email back from her boss about it, though, she was stunned by his response. Show Full Text Parker, who works for live chat software engineering company Olark, has been a vocal advocate for supportive workplaces since writing an emotional essay in 2015 about her harrowing battle with mental health issues and how they affect her career. Corporate culture often stigmatizes depression, anxiety and other mental disorders, despite the fact that peak mental performance is often essential to these kinds of jobs. How to Make the Most of Your Last 10 Minutes at Work. Whether you skim a blog post, peruse files for work, or browse through a book, you most likely do some type of reading every day. 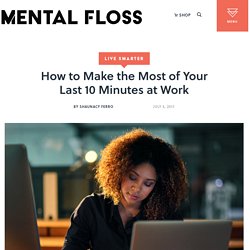 But slogging through dense passages of text can be time-consuming, mentally exhausting, and hard on your eyes. If you want to read faster while maintaining reading comprehension, check out these seven tips. Viewing a film’s trailer before watching the movie gives you context and lets you know what to expect. Why email kills creativity. As a marketer most of my career, I’ve been involved in countless creative projects. 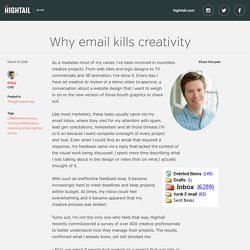 From web sites and logo designs to TV commercials and 3D animation, I’ve done it. Lifehack. Entrepreneurs lead a busy and overwhelming life, whether you’re just starting out or already leading a company – you know how much your time is worth to you. But do you know where your time goes? Turns out, most people don’t, we all end up staring at our phones way too often and wondering just how we spent all day working without really achieving much.

With life getting out of hand daily, everyone wants more control over their time. How to Be Productive With Your Time. How to Deal with a Job You Don’t Like. Archie Comics CEO accused of discriminating against male employees. The CEO of Archie Comics is being sued by a group of male employees for alleged sexual harassment and gender discrimination. According to court documents obtained by the New York Daily News, the employees — including the company’s president and editor-in-chief — say that Nancy Silberkleit acted in a hostile and “unstable” manner as co-CEO of the company, including regularly using the word “penis” in place of the names of her male employees. “[T]he word ‘penis’ became somewhat of a campaign slogan and her preferred method of referring to employees in lieu of their names,” according to the filing against Silberkleit.

My First Mistake by Simon Winchester - Roundtable. The victim of the first big mistake I ever made was a gentleman to whom I had never been properly introduced (and whose name I still do not know) but who was possessed of three singular qualities: he was alone in a room with me, he was without his trousers, and he was very, very dead. Some context might be useful. It was the winter of 1962. How to fold a thong: A straight man working at Victoria’s Secret.

I'd Say My Least Favorite Part About Being A Restroom Attendant Is Spending 8 Hours A Day In A Room Where People Defecate. You know, for the most part, being a restroom attendant is a pretty sweet gig. The hours are reasonable, the pay is decent, and I don’t have some boss standing over my shoulder telling me what to do all the time. How to Quit a Job (Without Burning Bridges) Quitting a job can make a man surprisingly anxious. The roots of the anxiety are myriad: The New Tao of Leadership (with John Maeda) What's the Big Idea? The Tao de Ching, that 2400 year old leadership bestseller, paints a picture of effective leadership that contrasts strongly with the Western idea of the Alpha boss. In place of decisive action, it recommends listening. Action on Addiction - Action on Addiction. Obama, Explained - James Fallows. As Barack Obama contends for a second term in office, two conflicting narratives of his presidency have emerged.

How to measure for a president: Temperament is a president’s most important attribute and the hardest to examine. Official White House Photo by Pete Souza/AFP/Getty Images. Apple Genius Bar training manual: a brilliant, manipulative guide to customer service. Photo by Claudio Villa/Getty Images. School Janitor's Summer As Human Already A Distant Memory. Bunch Of Numbers From Where Daddy Works Means No Trip To Disney World. In Mario Batali’s Kitchen, Please Refrain From Shouting. Fred R. Conrad/The New York Times Mario Batali, the chef, cookbook author and television personality, has restaurants in the New York and Los Angeles areas, as well as in Las Vegas and Singapore, with his business partner Joe Bastianich.

Yelling in the confines of a small kitchen, he says, simply isn’t necessary.