Volumes and issues. 19 Amazing Vintage Photos That Show How People Worked Before AutoCAD. We here at Bored Panda really love finding some interesting facts from our past, preferably together with some vintage photos to illustrate them. This time we’d like to share with you how an essential profession – the drafting technician – looked like before computers began their reign. A drafting technician may work in many spheres – from architecture to manufacturing and is responsible for engineering drafts, architecture drawings, and house plans. To put it simply – no structure is ever built without them. Technological advances cause some professions to cease to exist, but in the case of drafting technicians, it just made their desks smaller and tidier.

AutoCAD was released in 1982, and by 1994 as many as 750 training centers had been using it worldwide. Scroll down to check out what the old days were like. (h/t dyt, vintageeveryday) Some professionals instantly related to the rarely seen pictures Bored Panda works best if you switch to our Android app (h/t dyt, vintageeveryday) Traces from Jefferson's Account Book: The Hemings Family. This is the first post in a series that will examine strands of Thomas Jefferson’s life and world, from 1791-1803, through entries in his manuscript account book. 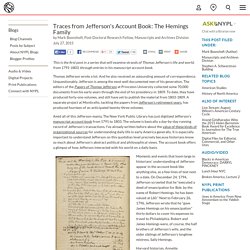 Thomas Jefferson wrote a lot. And he also received an astounding amount of correspondence. Unquestionably, Jefferson is among the most well documented men of his generation. The editors of the Papers of Thomas Jefferson at Princeton University collected some 70,000 documents from his early years through the end of his presidency in 1809. To date, they have produced forty-one volumes, and still have yet to publish the material from 1803-1809. Amid all of this Jefferson-mania, The New York Public Library has just digitized Jefferson’s manuscript account book from 1791 to 1803.

Moments and events that loom large in historians’ understanding of Jefferson appear in the account book like anything else, as a few lines of text next to a date. Thomas Jefferson account book 1791-1803, accounts February 1796 Further Reading: Stunning photos show what America looked like during the Great Depression. It’s sometimes said that “the past is a foreign country.” 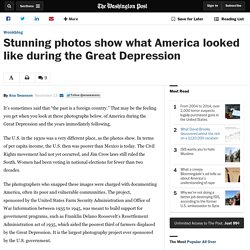 That may be the feeling you get when you look at these photographs below, of America during the Great Depression and the years immediately following. The U.S. in the 1930s was a very different place, as the photos show. In terms of per capita income, the U.S. then was poorer than Mexico is today. The Civil Rights movement had not yet occurred, and Jim Crow laws still ruled the South. Women had been voting in national elections for fewer than two decades. The photographers who snapped these images were charged with documenting America, often its poor and vulnerable communities. The Library of Congress has maintained and cataloged the collection, and Photogrammar, a site run by Yale University, now hosts 170,000 of the photographs. A 19th-Century Newspaper and a New Kind of Mental-Health Treatment. On a 17-acre plot adjacent to the University of Alabama were a farm, a corn crib, a stable, and a building to house the people who kept all of those things running. 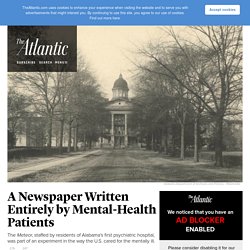 The building was a sprawling white structure with a library and a dance hall and rooms for the people who plowed the fields, shucked the corn, and raised the pigs. It was the first building in Tuscaloosa to have steam heating or gas lighting. It was also a hospital for the mentally ill, the first of its kind in Alabama. And from 1872 to 1881, it was the headquarters of the Meteor, a newspaper written, edited, and published entirely by patients and circulated beyond the hospital walls.

The paper was named after the patients’ own expectations for it: “Meteors are always a surprise,” the first issue explained, and “so doubtless will be our little sheet. The Alabama Insane Hospital was born directly out of Dix’s efforts. On the hospital’s collegiate neighbors: “The inmates of the University come to acquire ideas. Chronicling America « Library of Congress.