Travels in the US of A

The Best Fall Weekend Getaways In The US Are Not What You'd Expect. If spring symbolizes rebirth, fall is surely the season of recharging — a time for slowing down and savoring life’s simplest pleasures. 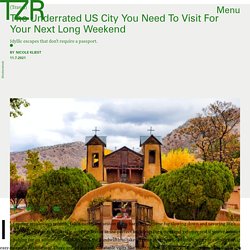 Naturally, autumn serves as the perfect backdrop for a weekend getaway and if you’ve been itching for an adventure but don’t have the bandwidth to take off time from work or family, why not consider an easy-to-reach destination? There are, of course, the staple visits like Los Angeles, New York, Miami, and so on. But if you want to head somewhere that feels a pinch out of the ordinary, you won’t fall short of options. Below, discover a roundup of 15 magical US cities for a quick fall getaway. These wondrous places are scattered throughout America and each offer a unique perspective. Yes, Europe is nice and a luxe vacation abroad is the stuff of dreams but so, too, can a quick jaunt be to a picturesque town in your own backyard (or country). The 20 Best Scenic Drives and Road Trips in America. “(My wife) Kate and I now spend our summers in western North Carolina in a region blanketed with lush vegetation, an abundance of waterfalls, tunnels and scenic vistas, but best of all great roads for motoring. 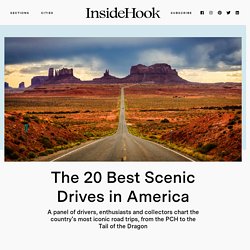 When we are hosting guests, our favorite loop begins in Brevard, NC (about 30 miles west of the Asheville, NC airport) and has three sections as follows: First Section (Hwy 276): Begin (or end) at Hawg Wild BBQ in Brevard, NC and head north on Hwy 276. The (New) Great American Road Trip: Where Else to Stop in All 50 States. Review: Hotel Drover Is an Authentic Ode to Fort Worth’s Cowboy Spirit. Drop into the middle of Downtown Austin or your average Dallas nightlife strip, and you feel like you could be anywhere. 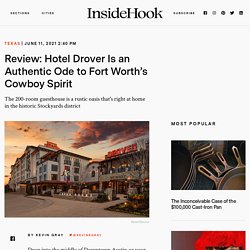 The cities both cater to international business and tourism, and half the residents you meet are California expats. The Best Road Trip Destinations Across the US. In Search of Arizona’s “Secret Season” A couple of crucial new criteria have arisen for traveling during a pandemic. 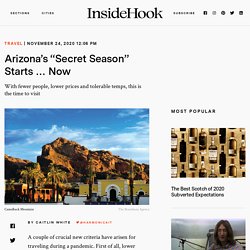 First of all, lower capacity has become an important caveat, as has the ability to comfortably be outside for the majority of the time. The intersection of these two factors makes Scottsdale and Arizona’s Sonoran Desert — already attractions in their own right — new hotspot destinations for the intrepid Angelenos who are still interested in traveling this winter. About the same driving distance as San Francisco, the greater Phoenix area is an excellent alternative to yet another Palm Springs trip for L.A. locals who want to (safely) mix things up. Close enough to avoid the airport and just a straight shot down the 10-east, Scottsdale enjoys moderate temperatures during the off-season that transform an artsy town into a cool, collected desert oasis.

There’s even a name for it: locals and hospitality folks refer to the calm, more temperate winter months as Arizona’s “secret season.” I Walked South From Ocean Beach for 8 Miles. Here’s What I Found. Photos: PHOTOS: Trump's Mar-a-Lago Through the Years, Inside and Out - The Palm Beach Post - West Palm Beach, FL. Front view of Mar-a-Lago, January, 31, 2017 in Palm Beach. 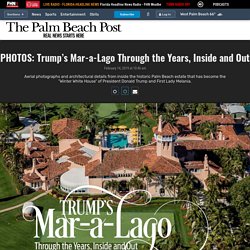 Post cereal heiress Marjorie Merriweather Post was Mrs. Edward F. Hutton when she commissioned Marion Sims Wyeth to build her a 58-bedroom Spanish-Moorish-Portuguese-Venetian palace on 17 acres of jungle between the ocean and the Intracoastal. Happy 174th Birthday, Florida! We love you, we really do. Florida’s birthday is March 3! 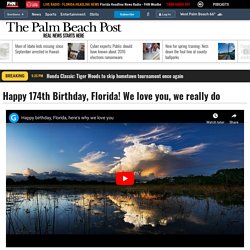 From Florida facts and Florida history to a little Florida fun in the sun and “Old Florida” postcards, let’s count the ways we love this state. On March 3, 1845, Florida became the nation’s 27th state. That means this lovely, long-haul of a state celebrates its 174th birthday on Sunday. And we couldn’t think of a better way to celebrate than to count some things we love about Florida — 30 things, actually, and in no particular order.

Florida Memory. The Florida Memory Blog. If you’ve ever looked at a map of Charlotte County in print or online, you’ve probably noticed something a little unusual on the northeast bank of the Myakka River near Port Charlotte. 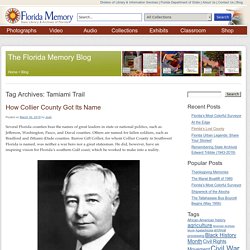 State Road 776, which crosses the Myakka River at that location, appears to run right through a series of concentric hexagons, with a circle at the middle. At first glance, it might appear to simply be a creatively designed neighborhood development. Florida History: Florida’s alligators were here first. This week, in “Florida Time,” a weekly column on Florida’s history, we discuss the ever-popular alligator. 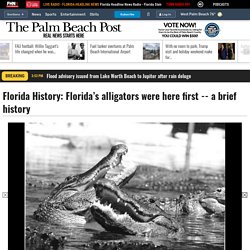 From how long the reptile has been around to where it got its nickname. Readers Colleen and Steve Moonen of Sarasota wrote in, asking “Have there always been alligators in Florida? When did the university take them as their mascot? West Florida. The Best Hike in Every National Park. From Alaska’s remote bush to downtown Cleveland, our national parks provide us with millions of acres of public land to explore. 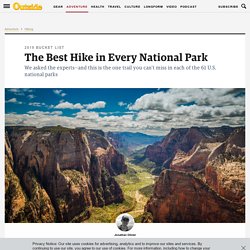 We compiled a list of the best hikes in each park, according to the wilderness guides, park rangers, and hikers who know them. Acadia Maine. The 25 Best Places to Live in America. It's impossible to please everyone with a list of great places to live. 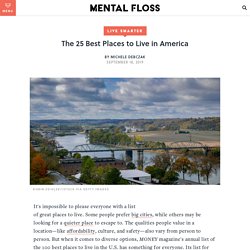 Some people prefer big cities, while others may be looking for a quieter place to escape to. The qualities people value in a location—like affordability, culture, and safety—also vary from person to person. But when it comes to diverse options, MONEY magazine's annual list of the 100 best places to live in the U.S. has something for everyone. The Quietest and Loneliest Roads in the United States.

Compared to the ultra-high-speed bullet trains of Japan, the breakneck speeds allowed on Germany’s autobahn, and the efficiency of the Swiss rail system, getting around the U.S. is often slow, inefficient, and often pretty dull. That’s thanks in large part to our reliance on decades-old freeways to get everywhere. Whether driving to and from work, across town, or between the coasts, most of the country’s traffic is restricted to the same 50,000 miles of Interstate Highways.

But, buried amid the four million total miles of marked roads criss-crossing the country are some of the most amazing drives in the world. If you’re looking for stunning, Instagram-worthy scenery and, most importantly, as few other travelers as possible, these are some of the quietest, loneliest scenic roads in America. Dalton Highway (State Route 11) The Most Beautiful Winter Train Routes in North America.

Great American Rail-Trail. Mypalmbeachpost. One-Star Yelp Reviews of California’s Most Beloved State Parks. 8 Great Rail Trails in the United States. In the 1960s, a group of railroad history lovers and outdoor enthusiasts in Washington, D.C., organized an effort to preserve unused railroad corridors as public multiuse trails. Their efforts began with a letter to the editor at the Chicago Tribune, and by 1986, the movement had grown into a nonprofit organization known as the Rails-to-Trails Conservancy.

Atlasobscura. Big Bend National Park: "Splendid Isolation" A tent surrounded by nothing but desert, a 2-hour trip to Mexico in a dust storm, and the first time I’ve ever looked overhead and seen the Milky Way. As the National Parks Service describes it, Big Bend National Park offers “splendid isolation,” and that description couldn’t be more accurate. I’m kind of letting the cat out of the bag when it comes to the secret that is this place, and I’ll be honest––I feel a bit guilty about it. Because as one of our country’s most remote and least-visited parks, Big Bend really does seem like the best-kept secret in the National Parks system.

That said, with recent news of public protected lands losing ground across Utah, I wanted to share the beauty and vastness of the wild places we still have, and hopefully help us all remember why they deserve to be protected. Back in October, two close friends and I flew into Austin. (Full disclosure: Not 100% sure if this ^ is the real “Big Bend” or just your normal average semi-big bend?

Squat gray columns hung over the waterline, grumbling faintly. The wind hammered our faces. But Chokoloskee Bay — shallow and silvery and floorboard flat — was brightening with morning light. As we cast off, a regatta of brown pelicans fell in behind us, tacking along like feathered sloops. The Rollicking 2,000-Mile Road Trip to Find the Center of America. Was that sign defaced, or did it mean to indicate "Agar, pop. 3"? Home - unDiscovered Florida. The 20 Best Small Towns to Visit in 2017. Your favorite small town probably doesn’t look quite like how Norman Rockwell drew it.

Best Dallas Instagrams. Montana Bed and Breakfast Big Sky, Fort Benton, MT Grand Union Hotel. Gainesville Hostel - Zen Hostel. Best Airports For Food and Drink - Best American Airports For Eating. Everyone has been faced with the same harrowing decision when stuck in an airport: what in the hell am I going to eat and drink now? So, in an effort to help you best sort that out, allow us to present our ranking of every single meaningful American airport’s food and drink. We did it like this: first we broke down every essential airport by the number of planes that fly in, plus region so every state was included. Then we looked up every single restaurant and bar available at each spot, and broke the airports down into four tiers. Once we had the tiers, we went deeper and figured out our proper rankings, paying particular attention to two factors: a) whether the options were unique and illustrative of the foods of that region, and b) the quantity of quality places available.

But we tried to weigh the first factor higher, so smaller airports with more local food got more credit than massive places with 85 chains. 72. 71. Vizcaya pool miami. Vizcaya Museum & Gardens - Vizcaya Museum & Gardens. The 8 Least Expensive Places To Live in the U.S. In tough times, it may be worth shopping around for the lowest prices. Historic Boutique Hotel. Downtown Dallas, TX Hotels - The Joule Dallas. Bus Transporting Carnival Cruise Passengers Crashes Into Sewage Treatment Plant. Taras Shevchenko Poetry - Taras Shevchenko Museum - the only Shevchenko Museum in the Americas. My Friendly Epistle. In Maine, Walking Where Waves Moved Winslow Homer’s Brush. Miami. In Colorado, Switchbacks and ‘The Shining’