The History of Art

Kathy Griffin’s Art is Terrible – ART + marketing. But I am angrier that people seem to think a picture of a painted mask matters more than what has actually happened this year. 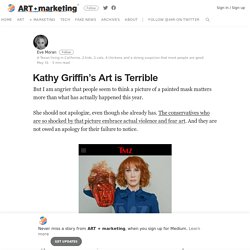 She should not apologize, even though she already has. The conservatives who are so shocked by that picture embrace actual violence and fear art. And they are not owed an apology for their failure to notice. It matters that we fear images more than real violence. It matters that our fiction is hyper realistic and violent, but we freak out over an actress in a picture holding a mask painted red. I will challenge them to answer why it is more dangerous than a president who sues newspapers and threatens comedians.

We do not ban the Bible for its violent content. We pretend political art is different, seemingly without regard for the fact that real children are killed when we repeal their access to health care, to safe food and clean water and bomb the buildings they hide in and raze historic sites. Meet the woman who shot up with Coco Chanel, inspired Proust, and was painted by Renoir. The New York Times: Book Review Search Article. Picasso, bulls and bullfighting. The man who made the case for discrimination. But there was more to Hughes than art criticism. 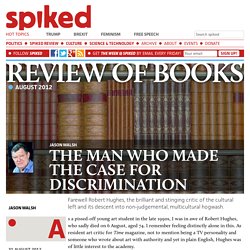 There was also politics. I discovered his book The Culture of Complaint in 1998. Based on a series of lectures and published as a book in 1993, its 210 pages bristled with frustration at the political left’s encouragement of the cult of victimhood and launched savage attacks on multiculturalism and therapy culture, while at the same time refusing to join forces with the equally intellectually bankrupt political right. In it, he rescued - or attempted to rescue, at least - the term discrimination, noting it is human nature to ‘make choices and decisions’, pointing out that, as with sport, art was one area of human endeavour where elitism was not only socially harmless, but actually worth celebrating.

Democracy’s task in the world of art is to make the world safe for an elitism based on skill and imagination A finer defence of discrimination over ‘whatever you’re having yourself’ would be hard to imagine. How a generation of consumptives defined 19th-century Romanticism. Detail from Ophelia 1851-2 by Sir John Everett Millais. 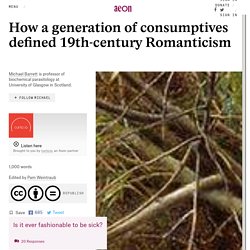 Photo Courtesy Tate/Wikipedia More than any other disease, tuberculosis (TB), or consumption, shaped the social history of 19th-century Europe. Its impact on the artistic world was just as powerful, with artists offering their own commentaries on the disease through painting, poetry and opera. The art of learning: Why art history might be the most important subject you could study today. We Americans tend to think of the British as infinitely more refined and cultivated than we are (despite the Brexit vote), but England almost eliminated art history as a field of study for high school students. 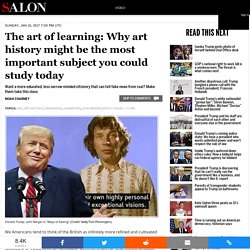 This would have cut it off at the knees and crippled it as a field of study altogether, because in the UK, high school students must choose their study subject when applying to university — if they’ve had no art history in high school, they are unlikely to choose it at uni. But after much protest from the liberal intellectual establishment, art history was “saved” and will stay on British curricula. If the cultured British nearly did away with art history, then what hope have we Americans? Bad times make great art. Worlds of light and shadow: The reproduction of liberalism in Weimar Germany. A Revolutionary Impulse: The Rise of the Russian Avant-Garde at The Museum of Modern Art, December 3, 2016 – March 12, 2017.

“In Russia in the early twentieth century, far-reaching artistic innovation and intense social and political turmoil were inextricably intertwined. 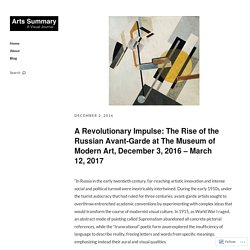 During the early 1910s, under the tsarist autocracy that had ruled for three centuries, avant-garde artists sought to overthrow entrenched academic conventions by experimenting with complex ideas that would transform the course of modernist visual culture. In 1915, as World War I raged, an abstract mode of painting called Suprematism abandoned all concrete pictorial references, while the “transrational” poetic form zaum explored the insufficiency of language to describe reality, freeing letters and words from specific meanings, emphasizing instead their aural and visual qualities. With the October Revolution of 1917, Vladimir Lenin’s Bolshevik party took command and instituted Marxist policies. Lyubov Popova (Russian, 1889-1924).

Untitled. c. 1916-17. Natalia Goncharova (Russian, 1881–1962). Olga Rozanova (Russian, 1886–1918). Art journalism. The paintings are of simple things: drapes fluttering in the breeze, a young boy making his way down a hill and across a meadow, ten or fifteen leaves dying on the spindly branch of a tree in late autumn. 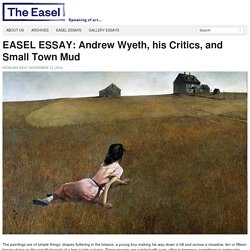 These images are painted with care, often in tempera, sometimes in watercolor. The attention to detail and the focus on craft evokes some of the great masters of old. Albrecht Dürer comes to mind. As in Dürer, a tuft of grass becomes the occasion for a display of skill so precise it verges on the ridiculous. Why would anyone in his right mind pay such close attention to the way a single brown stalk of wheat catches the light at the close of an autumn’s day? The almost homely nature of Andrew Wyeth’s pictures, the studiousness with which they avoid big subject matter and big questions would seem to render them unobjectionable to the extreme.

Lucian Freud: The Pitiless Eye by Jenny Uglow. At the National Portrait Gallery in London, not far from the ticket hall, there is a small bay for free temporary exhibitions. 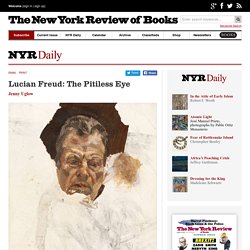 It can take you by surprise as you pass it in the corridor. This summer, as you walk toward it, an uncanny sight faces you—the head of a man emerging from a white cocoon, like a figure in a shroud. But the face is far from dead. In fact it is ferociously alive: it is an unfinished self-portrait by Lucian Freud. Winston Churchill and His Wife Hated His Portrait So Much She Destroyed It. Britain's wartime PM Winston Churchill diplomatically commented of Graham Sutherland's portrait of him that it was “a great example of modern art.” 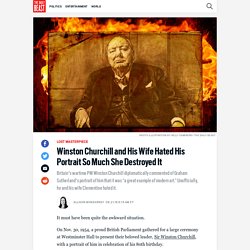 Unofficially, he and his wife Clementine hated it. Culture - The mystery of Van Gogh’s madness. On 27 July 1890, Vincent Van Gogh walked into a wheat field behind the chateau in the French village of Auvers-sur-Oise, a few miles north of Paris, and shot himself in the chest. 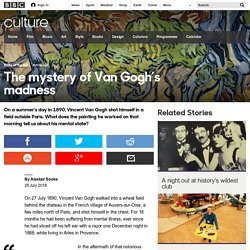 For 18 months he had been suffering from mental illness, ever since he had sliced off his left ear with a razor one December night in 1888, while living in Arles in Provence. One of Van Gogh’s last words was: ‘this is how I wanted to go’ Culture - Claude Cahun: The trans artist years ahead of her time. We live in a world where Caitlyn (formerly Bruce) Jenner has been named Woman of the Year and terms like 'gender neutral' and 'trans' have made their way into dinner table conversation. 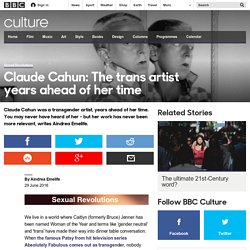 When the famous Patsy from hit television series Absolutely Fabulous comes out as transgender, nobody really bats an eyelid, sweetie darling. Discussions about the nature of gender and identity have been bubbling away throughout history, and our perceptions change from age to age. In the National Gallery in London, you can find a portrait of the Chevalier d’Eon, a French transvestite diplomat and soldier who was happily accepted as a woman in 18th Century Britain and eventually gained a celebrity-like status.

To me, the portrait pre-empts and somehow even resembles the Turner Prize-winning transvestite potter Grayson Perry, whose life and work make us question notions of gender. Shuffle the cards. Cahun described herself as ‘neuter’, putting herself outside the usual categories of gender. Striking poses. My art belongs to Dada. Hugo Ball (1886-1927), a German Dadaist author and poet, wearing the “Sorcerer’s” costume that Kevin Jackson describes below Read more from Kevin Jackson: The haunted summer of 1816 It was the evening of 23rd June 1916 at the Cabaret Voltaire, in Zurich. (Unless it was the evening of 14th July, at the Waag, a rented hall not far from there.

Few parts of this often-told story are beyond dispute.) Hugo Ball, a skinny young German author and poet who in recent years had taken to carrying an ancient skull around with him at all times, mounted the stage wearing what he described as a “Sorcerer’s” costume. Hollaka hollala anlogo bung. Culture - What is the meaning of The Scream? Beneath a boiling sky, aflame with yellow, orange and red, an androgynous figure stands upon a bridge. Wearing a sinuous blue coat, which appears to flow, surreally, into a torrent of aqua, indigo and ultramarine behind him, he holds up two elongated hands on either side of his hairless, skull-like head.

His eyes wide with shock, he unleashes a bloodcurdling shriek. Despite distant vestiges of normality – two figures upon the bridge, a boat on the fjord – everything is suffused with a sense of primal, overwhelming horror. Culture - The dark side of the city. What is it about Hopper? Every once in a while an artist comes along who articulates an experience, not necessarily consciously or willingly, but with such prescience and intensity that the association becomes indelible. He never much liked the idea that his paintings could be pinned down, or that loneliness was his metier, his central theme. "The loneliness thing is overdone," he once told his friend Brian O’Doherty, in one of the very few long interviews to which he submitted. In Praise of Lawrence Alloway. No literary genre is more ephemeral than art criticism. Mostly that’s a blessing, but sometimes writing of genuine value disappears from view.

The 1960s and ’70s were years of tremendous vitality for American art criticism, as they were for American art. "Cave of Forgotten Dreams" May Hold Earliest Painting of Volcanic Eruption. Miley Cyrus and the culture of excess in American history. Miley Cyrus has shocked the world anew with a recent CANDY Magazine photo shoot by over-the-top fashion photographer Terry Richardson. Cyrus sticks her tongue out with enthusiasm—and does much more.

How Art Became Irrelevant. The Accidental Color That Changed The Course Of Art. Constructivism (art) PETER SCHJELDAHL with Jarrett Earnest. Theconversation. Kim Kardashian has made headlines again for a selfie. The haunted painting of fabled Franklin ship discovered in the Canadian Arctic. At Royal Holloway College at the University of London, Edwin Landseer’s picture “Man Proposes, God Disposes” (1864) is covered by a Union Flag every year during exams. Not because of any fears of cheating during history exams but because students believe they will fail their exams (or even go mad) if they look at it. World War I and the loss of artistic innocence. What the conflict would mean for British art was much debated in World War I – the question was already being asked in journals and newspaper reviews in the latter part of 1914. German art collector claims he hoarded paintings out of love.