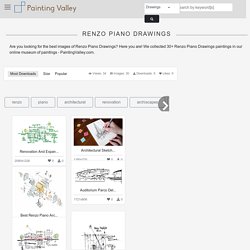 Underground Museum. Renovation of a chapel [church] Identity image and visual-geographic reference, these are the two values that are attributed to the church of St. 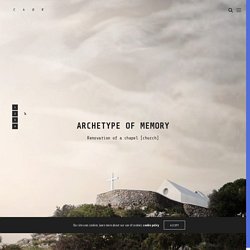 Giovanni in Castellare. From this, a project that goes on on a binary route that is simultaneously able to take charge of the symbol that the community attributed to the building that used to be there before and to maintain the connection with the territory. The theme of memory is treated on the compositional plane by maintaining the cabin model and the rectangular diagram, in order to evoke the archetypical language that guarantees the universal recognizability of this church. 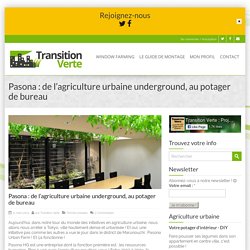 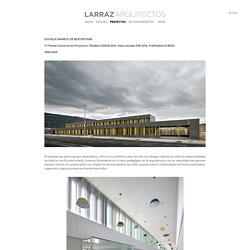 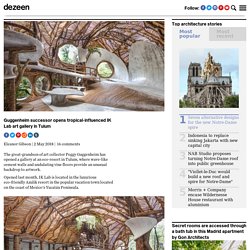 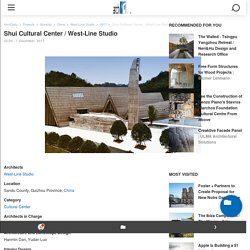 Located in the Southeastern part of Guizhou Province, the Shui Cultural Center is a gateway to Sandu County, the land of the Shui. Radic . Medrano . Serpell. Torre Antena . 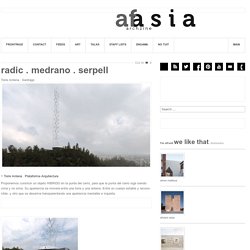 Smiljan Radic . The Winery at VIK . Millahue (16) Installations "In Search Of The First Line" de l'artiste Noémie Goudal. Studio cusenza+salvo. Located in Favignana, the largest island of the Egadi Islands in the province of Trapani, the Cave Bianche Hotel is part of an exclusive and spectacular setting, located in a quarry of white limestone. 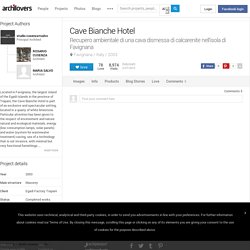 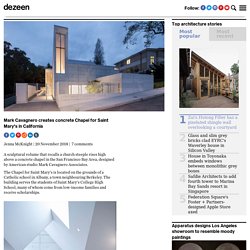 The Chapel for Saint Mary's is located on the grounds of a Catholic school in Albany, a town neighbouring Berkeley. The building serves the students of Saint Mary's College High School, many of whom come from low-income families and receive scholarships. Encompassing 4,400 square feet (409 square metres), the concrete chapel emerges from a sloped site on the edge of campus. Fountains jet water over entrance to Foster + Partners' sunken Apple store in Milan. In Milan the latest Foster + Partners-designed Apple Store features a dramatic water feature in an update on the traditional Italian piazza. 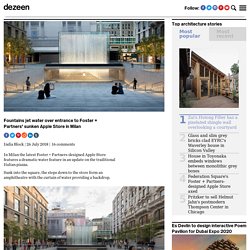 Sunk into the square, the steps down to the store form an amphitheatre with the curtain of water providing a backdrop. The eight-metre high glass walls contain a water feature that was, according to architects, supposed to be an "immersive recreation" of running through a fountain as a child. "The fountain is an expression of child-like excitement that speaks to each one of us," said Stefan Behling, head of studio at Foster + Partners. "In its simplicity, it echoes the idea of walking into a big fountain without getting wet, and the joy of being alive. " Apple Piazza Liberty is located off the Corso Vittorio Emanuele, and is the tech giant's first Italian outpost in its new design style. PES Architects reveals ceramic clad Strait Culture and Art Centre in Fuzhou. PES Architects used custom-developed ceramic tiles and louvres to create the curving lines of the Strait Culture and Art Centre in Fuzhou, China.

The Helsinki- and Shanghai-based studio arranged the five swooping buildings that make up the centre to unfurl like the overlapping petals of a jasmine flower – the symbol of Fuzhou. Opened on 10 October 2018, the 153,000-square-metre arts complex contains a 1,600-seat opera house, 1,000-seat concert hall, a theatre that seats 700, an art exhibition hall, and a cinema. Each of these functions is housed in a separate "petal", which fan out from a connecting concourse and roof terrace, accessed via public gardens and a plaza on the waterfront of the Minjiang River. An underground promenade connects the centre to a metro station.

Bernardo Bader Architekten design stone-clad Alpin Sport ski centre. The Alpin Sport ski resort headquarters in the village of Schruns, Austria, by Bernardo Bader Architekten, has mismatched windows and is clad in irregularly quarried stone. The offices for the Silvretta Montafon ski resort also features an unusual, roughly square plan where each side angles gently in or out. Described by Bernardo Bader Architekten as "a powerful and stately house in the tradition of the surrounding village", the new building provides workspace for around 60 people alongside educational and information spaces and a conference room. The centre stands alone on a site between the denser village centre and its more open edge. The ground floor of the Alpin Sport building has been conceived as a continuation of the adjacent Silvretta Square, which flows into a large, paved lobby and information area. Terrain installs 560m2 of forest in breathe austria pavilion at EXPO.

Amazing Glass Home on the Edge of Sea and Rock. Gallery of Hakka Indenture Museum / DnA - 36. Gallery of Steven Chilton Architects' Guangzhou Theater is Inspired by the Ancient Chinese Art of Puzzle Ball Carving - 11. Feilden Fowles completes Yorkshire Sculpture Park visitor centre. A gallery, interpretation space, restaurant and shop designed by Feilden Fowles has opened at the Yorkshire Sculpture Park in northern England. The Weston is a visitor centre marking the entrance to the Yorkshire Sculpture Park – an open-air gallery in West Yorkshire that includes works by numerous internationally renowned artists including Henry Moore and Barbara Hepworth. "The building is designed to have minimal impact on the historic landscape and to serve as a subtle and respectful landmark on the eastern boundary of the sculpture park," explained Fergus Feilden, director of Feilden Fowles.

Cette vieille bâtisse s’est transformée en un bijou qui s’intègre parfaitement au riche passé architectural du lieu. A Gand (Belgique), le collectif Rotor a sublimé un bac à gravier. Éric Lapierre Experience - Musée national de Norvège Oslo 2009. The Broad by Diller Scofidio + Renfro. The Broad is a new contemporary art museum being built by philanthropists Eli and Edythe Broad on Grand Avenue in downtown Los Angeles. The museum, which is designed by Diller Scofidio + Renfro, will open on September 20, 2015. The museum will be home to the nearly 2,000 works of art in The Broad Art Foundation and the Broads’ personal collections, which are among the most prominent holdings of postwar and contemporary art worldwide.

The van features multiple in-built storage boxes, a retractable work bench with wall-mounted lamp, plus specially designed storage for cables and a full set of tools attached to the inside of the back doors. "The designs for the tool storage came from years of site work, thinking about how we work, what tool you want where," explained studio founder Will Hardie. The Farmhouse by Precht combines modular homes with vertical farms. Architecture studio Precht has developed a concept for modular housing where residents produce their own food in vertical farms. Architects Fei and Chris Precht, who is also the co-founder of architecture studio of Penda, developed The Farmhouse as a way to reconnect people in cities with agriculture and help them live in a more sustainable way. Precht designed The Farmhouse as populations around the world are increasingly becoming city dwellers who have lost touch with how their food is produced, while food transportation has an increasingly damaging effect on the environment.