Rampaging along In the Sea and in the Water

Watch This Terrifying Footage Of A Spider Crab Chasing After This Underwater Camera. No One Is Prepared for Hagfish Slime. What the Grieving Orca Tells Us. The world did, too. 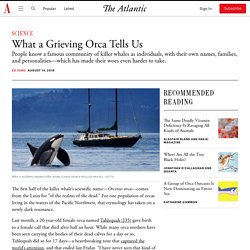 Bigg, Balcomb, and their colleagues used their data to study the lifelong bonds between mothers and their children, to study their complex communications, and to work out why orcas are among just three animal species that go through menopause. Killer Whales: 'Transient' Orcas Are Thriving. On a warm September afternoon, on San Juan Island off the northwestern coast of Washington State, I boarded J2, a sleek black-and-white whale-watching vessel. 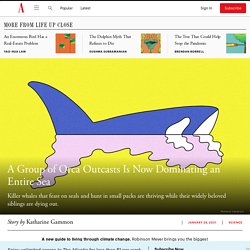 The boat was named after a locally famous orca, or killer whale, affectionately known as “Granny.” Until her disappearance in 2016, Granny was the matriarch of J-pod, one of the three resident orca groups, or pods, that live in the surrounding Salish Sea. Man Attacked By Crocodile Battles for Survival. Paramedics and other first responders tell the Guardian the encounter took place on Jan. 20 in Lake Placid, located in Cairns. 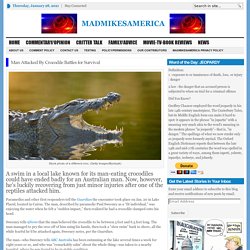 The man, described by paramedic Paul Sweeney as a “fit individual,” was enjoying the water when he felt a “sudden impact,” then realized he had a crocodile clamped onto his head. Sweeney tells 9News that the man believed the crocodile to be between 5 feet and 6.5 feet long. The man managed to pry the croc off of him using his hands, then took a “slow swim” back to shore, all the while fearful he’d be attacked again, Sweeney notes, per the Guardian. The man—who Sweeney tells ABC Australia has been swimming at the lake several times a week for eight years or so, and who was “remarkably calm” about the whole thing—was taken to a nearby hospital, where he was found to be in stable condition. NPR Choice page. Scientists baffled by orcas ramming sailing boats near Spain and Portugal. Scientists have been left baffled by incidents of orcas ramming sailing boats along the Spanish and Portuguese coasts. 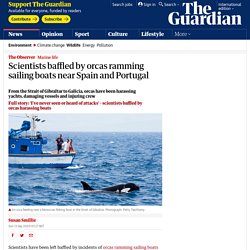 In the last two months, from southern to northern Spain, sailors have sent distress calls after worrying encounters. Two boats lost part of their rudders, at least one crew member suffered bruising from the impact of the ramming, and several boats sustained serious damage. 'Maybe it did just want to eat me': Australian surfer whose partner fought off great white shark tells why she wants to save them. Chantelle Doyle lies diagonally across her hospital bed with her heavily bandaged right leg propped up on a chair at a 30-degree angle. 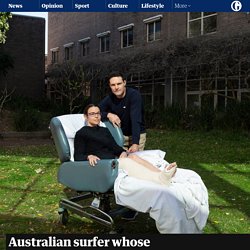 She is trying to help her nerves heal. It might not work. Great white sharks can bite hard. Twelve days ago, the 35-year-old was surfing with her partner, Mark Rapley, when a 2.5m juvenile great white took her leg in its mouth and severed the nerves below her right knee, taking a chunk out of her calf. What Rapley did in the seconds that followed in the surf off Shelly Beach near the New South Wales city of Port Macquarie has made news bulletins across the country and parts of the globe. Grouper Swallows A Shark Whole, Stuns Deep Sea Researchers. A Filmmaker Shooting a Shark Documentary was Attacked by a Shark on Her Day Off. A 29-year-old woman was bitten by a shark while taking a day off from filming a shark documentary in Far North Queensland, Australia. 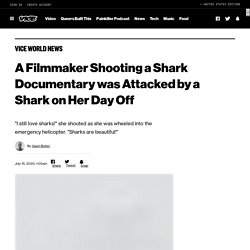 The filmmaker was snorkelling the Great Barrier Reef, about 100 metres off Fitzroy Island near Cairns, when the shark struck. Bystanders, including doctors, provided first aid until paramedics arrived and airlifted the woman to Cairns hospital. “I still love sharks!” She shouted as she was wheeled into the helicopter.

“Sharks are beautiful!” Emergency crews have confirmed the woman is now in a stable condition, although her injuries are significant, including deep lacerations to her lower left leg and a possible ankle fracture. Tortus-blog: Give me that! MINE.  Photo Of A Sleeping Whale With Her Calf Just Won $120,000 At The HIPA Contest And Here Are 17 Of The Winners. HIPA representatives told us: "Judging points from 1 and 100, the total points simply determine the winner, and the comprehensiveness and diversity of expertise, knowledge and background of the judges lends impartiality in its best form to the process as a whole. 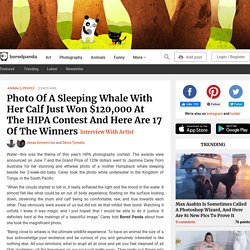 Ever Seen a Great White Shark Sprint? A Drone Captured This One Absolutely Flying. These fishermen-helping dolphins have their own culture. This Guy Feeding His Aquarium Fish A Boiled Carrot Is The Most Relaxing Thing You'll See Today. What Drifting Car Tires Can Tell Us about Dead Sea Otters. Article body copy In 1995, scientists tossed 33 car tires into the Pacific Ocean. 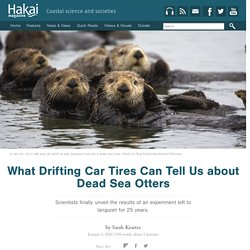 Their hope was that the drifting rubber would show them how oil spills affect sea otters—and more than 20 years later, the tires have finally done their job. Sea otters are more vulnerable to oil spills than any other marine mammal. They lack the blubber that keeps whales, seals, walruses, and other marine mammals warm, and instead rely on dense fur that traps a layer of insulating air close to the body.

Anything that compromises the waterproofing of that fur can bring an otter down quickly. “It’s the reason we focus on them,” says Colleen Young, an environmental scientist with the California Department of Fish and Wildlife. Oil spills cause damage that is often varied and widespread. This Rescued King Penguin Loved Going To The Fish Market So Much That His Family Taught Him How To Buy Fish On His Own. While there are so many people who find penguins absolutely adorable, given the right circumstances, few of us would dare to keep them as pets. 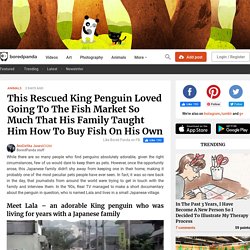 However, once the opportunity arose, this Japanese family didn’t shy away from keeping one in their home, making it probably one of the most peculiar pets people have ever seen. In fact, it was so rare back in the day, that journalists from around the world were trying to get in touch with the family and interview them. In the ’90s, Real TV managed to make a short documentary about the penguin in question, who is named Lala and lives in a small Japanese village. Meet Lala – an adorable King penguin who was living for years with a Japanese family. Sunday Palate Cleanser. Person Hates Ocean Sunfish With Such Passion, They Post This Hilarious Rant And It Goes Viral. The ocean sunfish or mola mola is doing its best to survive. 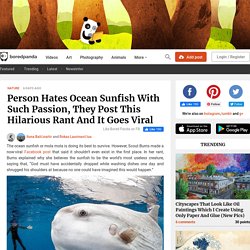 However, Scout Burns made a now-viral Facebook post that said it shouldn’t even exist in the first place. Diver Convinces Baby Octopus To Give Up His Plastic Cup In Exchange For A Shell. Not a day goes by without a news story about how waste finds its way into our beautiful oceans. With each such story, however, more and more efforts are dedicated to turning the tide on water pollution. Saturday Palate Cleanser. 23 Hilarious Fish That Got Shamed Publicly For Being Naughty.

Probably most of us love our pets absolutely unconditionally, whatever they are - cats, dogs or... Fish? You read it right! While both cats and dogs get loads of attention all over the internet, fish owners decided they are no lesser than the latter. Having that in mind, someone thought what could better get the attention of people all over the Internet if not some good old shaming posts.

Remember? The Shark Was Thiiiis Big (Plus or Minus a Meter) Article body copy The cliché of the big fish story is, apparently, based on truth—humans love to exaggerate, especially when it comes to the size of the fish they saw. Wetsuits that hide humans from sharks. Bright idea: Lights under boards may hide surfers from sharks.

Watch: great white attacks another shark! How to Survive an Alligator Attack. In late August of 2018, a woman was walking her dog at a golf course on Hilton Head Island in South Carolina. How Argentina is saving one of Earth’s most remote places. Octopus Attacks Woman That Tried To Eat It Alive. A live-streaming host known as Seaside Girl Little Seven regularly posts clips of herself enjoying seafood, but this time, in hopes of gaining more popularity, she tried something else. How Would I React to a Great White Shark Encounter? Now, I Know. Diver Finds Himself Completely Surrounded By A Mob Of Friendly Sea Lions.

Midday Palate Cleanser. I Took These Amazing Shots Of A Shark Frenzy In Western Australia. This Narwhal Was Adopted by a Pod of Belugas. Atlasobscura. Sciencemag. This Live Stream Lets You Eavesdrop on Endangered Killer Whales' Conversations. Very Polite Canadian Belugas Have Made Friends With a Lone Narwhal. - The Washington Post. - The Washington Post. Jezebel. The Gulper Catfish Eats Fish Its Own Size. Electric forcefield rises to the top in trials of shark deterrent devices. Why are shark attacks on the rise in North Carolina? Atlasobscura. 9 Exhilarating Close-Up Photos of Sharks. Great White Sharks hunted by Orcas in Gansbaai Continues. Incredible Video Shows an Orca Whale Hurling a Seal 80 Feet Into the Air. Watch A Pod of Orcas Stalk, Attack, and Feast on A Tiger Shark.

Unprecedented Images Show Orcas Hunting and Killing Rare Beaked Whales. Killer Whales Eat Enormous Great White Shark in South Africa. Earth - One creature had a bite more powerful than any other. 'Stinky' the dolphin tries to get busy with Cayman divers (VIDEO) Military-Trained Ukrainian ‘Killer’ Dolphins On Loose. Shark! Fisherman Gets Quite A Scare, Catches Scene On Video : The Two-Way. VIDEO: When A Shark Steals Your Catch : The Two-Way.