Brooke Baldwin Beats Down Barber Defying Stay-At-Home Order To Own The Libs. Brooke Baldwin must be off somewhere getting a stiff drink after interviewing Juan Desmarais, owner of three barber shops in California. 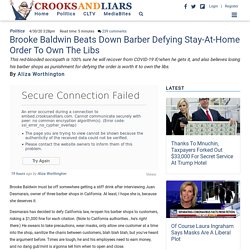 At least, I hope she is, because she deserves it. Desmarais has decided to defy California law, re-open his barber shops to customers, risking a $1,000 fine for each citation. (Note to California authorities...he's right there.) He swears to take precautions, wear masks, only allow one customer at a time into the shop, sanitize the chairs between customers, blah blah blah, but you've heard the argument before. Times are tough, he and his employees need to earn money, and no dang gub'mint is a'gonna tell him when to open and close. Baldwin sympathizes with the economic hardships, but when she begins to ask about the risk of catching the deadly disease — one from which she has just recovered — that is when things go truly off the rails into Yellow Submarine-land. DESMARAIS: Absolutely. CNN's Brooke Baldwin Tests Positive For The Coronavirus. Earlier last week, Brook Baldwin got overcome with emotion as she spoke with Michelle Bennett who had to say goodbye to her mother via FaceTime as she succumbed to COVID-19. 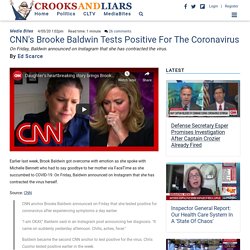 Via Instagram Earlier last week, Brook Baldwin got overcome with emotion as she spoke with Michelle Bennett who had to say goodbye to her mother via FaceTime as she succumbed to COVID-19. Source: CNN. CNN's Brooke Baldwin Rips Fox News Over Brazen Gaslighting. Brooke Baldwin and her guests ripped Fox News for pretending the IG report on the origins of the Russia investigation proved Trump and his cronies at Fox RIGHT. 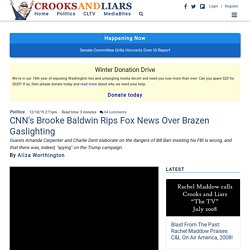 Bootlickers like Hannity, Ingraham, and Carlson have all been bleating that the report concludes there WAS spying on the Trump campaign, and there WAS a witchhunthoaxdeepstate thing going on. Well, okay, but not if you actually READ the report. Baldwin discussed this with former Republican Congressman Charllie Dent, and author Amanda Carpenter, who wrote Gaslighting America: Why We Love It When Trump Lies To Us. Kinda perfect choice, no? You have nearly the entirety of Fox News, America's Attorney General Bill Barr, and the president gaslighting the nation on the regular, and it is anybody's guess if we'll ever recover from the damage. Except there wasn't. Baldwin asked what it says about the state of things when Jim Comey's own mother-in-law is slurping up Fox News and worried he'll go to jail?

DENT: I'll tell you what, Brooke. Trump gives America ‘the middle finger’ every day: Historian says we will need 'a collective shower' once he leave. CNN’s Jim Acosta suggests Sarah Sanders is afraid to hold briefings because of Trump’s legal problems. 'Was it worth it?' CNN host corners Louisiana Republican after GOP takes huge approval hit after shutdown. 'Shameful': CNN's Brooke Baldwin Lays Into Trump. CNN's Brooke Baldwin utterly baffled over Trump's fear of Mexican mountain climbers. ‘Don’t tell me to do homework’: CNN’s Baldwin schools pro-Confederate guest comparing Hitler to Lincoln. ‘Sorry this is long’: Watch CNN’s Baldwin stop for water as she tries to read an unending list of Trump failures. CNN’s Brooke Baldwin on Friday had a priceless reaction to the news that Donald Trump has fired chief White House strategist Steve Bannon, reading headlines from the president’s “chaotic four weeks” that were so long she had to stop and drink a cup of water. 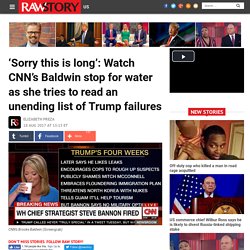 “Steve Bannon has been fired,” Baldwin said. “It has been a chaotic four weeks, even by these White House standards, so let’s just all take a moment just to remind you what has happened, incredibly significant events, one after the other.” “So, in no particular order,” she began. “Hold on a second, sorry,” she said, smirking as she reached for a cup of water. “This is long.” She then continued: “Encourages police to be rough with suspects during arrests, publicly shames the Republican leader he needs to get anything done—multiple times—embraces an unpassable immigration plan that sparks a debate about the Statue of Liberty and the definition of ‘cosmopolitan.’

“Suggests there’s no difference between George Washington and Robert E.