La Luz: One School Leader’s Journey to Create an “Unschool” Our belief was, “Let’s focus first on the character of the kids and the rest will fall into place”—a radical approach that got me in a little trouble as a leader. 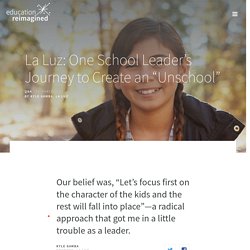 Kyle Gamba Founder, La Luz Q. Can you share with us your journey as an education leader and what led you to launch La Luz? Kyle: I started my education career as a substitute teacher, well into my adulthood. Then, I eventually became the principal at College View Elementary in southwest Denver. Fast forward five years, and we transformed the fifth lowest performing school in the Denver Public School District—passing 75 other schools along the way—into a school that was meeting district expectations and serving as a true community school.

A Pre-COVID Education Study With Big Implications for Remote Learning During the Pandemic: When Parents Take Over, Children Give Up Easier. * One lace loops to make the trunk. 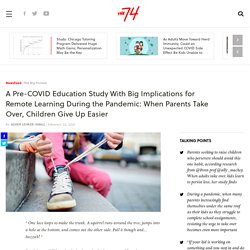 A squirrel runs around the tree, jumps into a hole at the bottom, and comes out the other side. Pull it though and… huzzah! * Teaching a child to tie their shoes isn’t always easy. Gone Crazy. New York’s East Side Community School recently sent a letter encouraging white parents to become “white traitors” and advocate for “white abolition.” 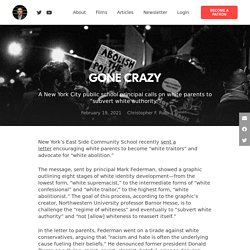 The message, sent by principal Mark Federman, showed a graphic outlining eight stages of white identity development—from the lowest form, “white supremacist,” to the intermediate forms of “white confessional” and “white traitor,” to the highest form, “white abolitionist.” The goal of this process, according to the graphic’s creator, Northwestern University professor Barnor Hesse, is to challenge the “regime of whiteness” and eventually to “subvert white authority” and “not [allow] whiteness to reassert itself.” 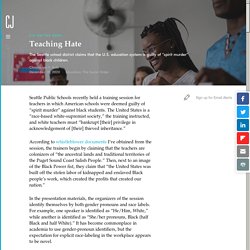 The United States is a “race-based white-supremist society,” the training instructed, and white teachers must “bankrupt [their] privilege in acknowledgement of [their] thieved inheritance.” According to whistleblower documents I’ve obtained from the session, the trainers begin by claiming that the teachers are colonizers of “the ancestral lands and traditional territories of the Puget Sound Coast Salish People.”

Then, next to an image of the Black Power fist, they claim that “the United States was built off the stolen labor of kidnapped and enslaved Black people’s work, which created the profits that created our nation.” In the presentation materials, the organizers of the session identify themselves by both gender pronouns and race labels. The trainers acknowledge that this language might meet resistance from white teachers. Philadelphia 5th Graders Forced to Celebrate “Black Communism" A Philadelphia elementary school recently forced fifth-grade students to celebrate “black communism” and simulate a Black Power rally in honor of political radical Angela Davis. 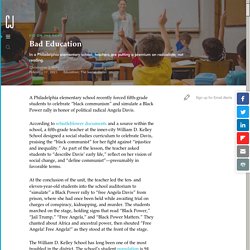 According to whistleblower documents and a source within the school, a fifth-grade teacher at the inner-city William D. Kelley School designed a social studies curriculum to celebrate Davis, praising the “black communist” for her fight against “injustice and inequality.” Final Report- The President’s Advisory 1776 Commission. The Bias Fallacy. The United States is being torn apart by an idea: that racism defines America. 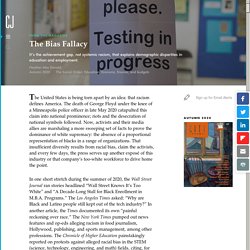 The death of George Floyd under the knee of a Minneapolis police officer in late May 2020 catapulted this claim into national prominence; riots and the desecration of national symbols followed. Now, activists and their media allies are marshaling a more sweeping set of facts to prove the dominance of white supremacy: the absence of a proportional representation of blacks in a range of organizations. That insufficient diversity results from racial bias, claim the activists, and every few days, the press serves up another exposé of this industry or that company’s too-white workforce to drive home the point. In one short stretch during the summer of 2020, the Wall Street Journal ran stories headlined “Wall Street Knows It’s Too White” and “A Decade-Long Stall for Black Enrollment in M.B.A. Programs.” This journalistic theme has deep roots. The Age of Cant. Cant, or humbug, is far worse than hypocrisy: for if by hypocrisy, we mean a failure to live up to our professed moral ideals, most of us are hypocrites, and thank goodness for it. 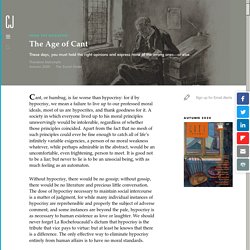 A society in which everyone lived up to his moral principles unswervingly would be intolerable, regardless of whether those principles coincided. Apart from the fact that no mesh of such principles could ever be fine enough to catch all of life’s infinitely variable exigencies, a person of no moral weakness whatever, while perhaps admirable in the abstract, would be an uncomfortable, even frightening, person to meet. It is good not to be a liar; but never to lie is to be an unsocial being, with as much feeling as an automaton. Charter school funding inequity surges in the city. The Hard Untruths of Ta-Nehisi Coates - Kyle Smith, Commentary Magazine.

Uppose you were a white person with a deep-seated dislike for black people, and you were intent on training your son to feel the same way. 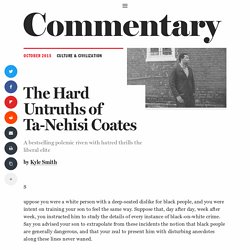 Suppose that, day after day, week after week, you instructed him to study the details of every instance of black-on-white crime. Three Cups of Fiction — Carol Black. The World Bank isn’t giving us any data on this. 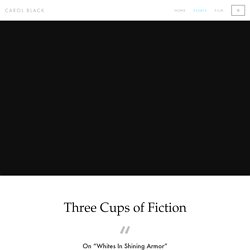 Girls’ education raises GDP, the development agencies all crow! Yes, but transitioning rural people from self-sufficient farming into sweatshops also raises GDP. Girls’ education lowers the infant mortality rate! Yes, but what if introducing school failure into rural areas also raises the sex trafficking rate? Schooling in the U.S.: Destroying adolescent well-being while forcing teens to engage in useless activities. But of course this is exactly what our schooling system does day in, day out, to our teens. 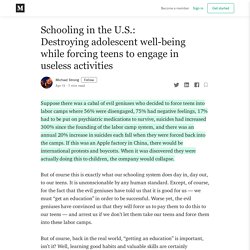 It is unconscionable by any human standard. Except, of course, for the fact that the evil geniuses have told us that it is good for us — we must “get an education” in order to be successful. Worse yet, the evil geniuses have convinced us that they will force us to pay them to do this to our teens — and arrest us if we don’t let them take our teens and force them into these labor camps. But of course, back in the real world, “getting an education” is important, isn’t it? Well, learning good habits and valuable skills are certainly important. Why I Wrote ‘Thinking Like a Lawyer’: Because Teaching Critical Thinking to All Students Paves a Path to Racial Justice. As a “poorly behaved” Black boy in Brooklyn, New York, on free and reduced-priced lunch whose parents were immigrants and whose father was incarcerated for selling drugs, I had the rare experience of being selected for a gifted and talented program starting in second grade.

My first-grade class was all about drill-and-kill, low-level tasks with no complexity. Second grade was radically different. From creating my own fairy tales to designing our own science experiments, I learned what a separate and unequal education was at an early age. Why Do Intellectuals Oppose Dr. Jordan B. Peterson? Genius: An Overview and Perspective - AssessmentPsychology.com. "On the trip home from the Nobel ceremonies in Stockholm, prize-winning physicist Richard Feynman stopped in Queens, N.Y., and looked up his high-school records. 'My grades were not as good as I remembered,' he said, 'and my I.Q. was 124, considered just above average.' " James Gleick. (1992).

Genius: The Life and Science of Richard Feynman. New York: Pantheon. Editor's note -- Richard Feynman's IQ of 124 was well above average for high school graduates and even college graduates. The Myth that Americans Were Poorly Educated before Mass Government Schooling - Foundation for Economic Education. Parents the world over are dealing with massive adjustments in their children’s education that they could not have anticipated just three months ago. To one degree or another, pandemic-induced school closures are creating the “mass homeschooling” that FEE’s senior education fellow Kerry McDonald predicted two months ago. Who knows, with millions of youngsters absent from government school classrooms, maybe education will become as good as it was before the government ever got involved.

Are Kids Learning More at Home During COVID-19? More than one billion students around the world are currently missing school due to the COVID-19 pandemic. Several US states have already canceled school for the remainder of the academic year, turning to online learning when possible, and other states are likely to extend their school closures soon. Some educationists panic about learning loss while children are at home with their families, and headlines abound about how “homeschooling during the coronavirus will set back a generation of children.” Learning Outside of a Classroom. How school choice puts all hands on deck - redefinED. Academy Prep Center of Tampa is a rigorous private middle school for students who qualify for need-based scholarships.

Modeled after Nativity Mission Center in the Lower East Side of Manhattan, students attend school 11 hours a day, six days a week, 11 months a year. Seventeen years ago, a group of business and community leaders in Tampa Bay decided to renovate rather than raze an old, abandoned public school. The spooky building with stately red brick once served generations of Cuban and Italian kids in Tampa’s historic Ybor City neighborhood. City Schoolhouse Brings Learning Home. Are Public Schools Causing an Epidemic of Mental Illness?

As of yet, there is no common definition that covers all these schools, which vary not only by size and cost but also in their education philosophies and operating models. Bella Bella, B.C.: The town that solved suicide. A Different Kind of Genius: Standardized Learning vs Beautiful Diversity. What society seems to favor in young people — obedience, popularity, good school behavior, robust mental health, plus good grades and test scores — doesn’t necessarily build on their inborn strengths. The Seven Lesson Schoolteacher. The Seven-Lesson Schoolteacher John Taylor Gatto. A Thousand Rivers — Carol Black. A Thousand Rivers — Carol Black. No Thank You, We Don't Believe in Socialization! I can't believe I am writing an article about socialization, The word makes my skin crawl. St. John's College tuition cut reaps increased applications and donations. St. The plan to redistrict NYC schools in the name of diversity.

Racism and the completely politically correct classics departments – The New Neo. Reading Fuels Empathy. Do Screens Threaten That? Lessons From Flipped Classrooms and Flipped Failures. Learning. It’s Not About Education. Top Consensus Ranked Innovative Colleges for 2018. Video: Heather Mac Donald on 'The Diversity Delusion' Rebecca Friedrichs Talks Standing Up to Goliath at Goldwater Book Event – In Defense of Liberty. How the Academic Left Caricatures the Right as Defenders of the Status Quo.

Who's Behind the War on Orthodox Jewish Schools? You Can't Make This Up: A Speech Code that Investigates Students for Discussing the Freedom of Speech. Why are We Doing this? Cognitive Science and Nondirective Supervision in Clinical Teaching by Serge Martinez. Campus Unrest Is Really About Power, Not Justice. Untitled. Camille Paglia: It’s Time for a New Map of the Gender World. Greg Lukianoff on 'The Coddling of the American Mind' How the Other Half Learns: Reorienting an Education System That Fails Most Students. Untitled. Why Jordan B Peterson Appeals to Me (And I Am on the Left) - Quillette.

Untitled. Commentary: A liberal arts education in Singapore and the usefulness of ‘useless’ knowledge. Nationalreview. In the Safe Spaces on Campus, No Jews Allowed. Schooling Was for the Industrial Era, Unschooling Is for the Future - Foundation for Economic Education - Working for a free and prosperous world. A Bipartisan Case for School Choice. Sexual paranoia on campus – and the professor at the eye of the storm. Actually, Betsy DeVos is perfectly qualified to be Education Secretary. Watch out, reformers, you're about to get DeVossed. Proven Policies to Fix Failing Schools. The New York Times Gets Everything Wrong in This Article That Falsely Claims Economists Don’t Like School Choice. School Choice Is Just Peachy. 50 Things You Should Never, Ever Say to Your Kids. America’s Worst Colleges.