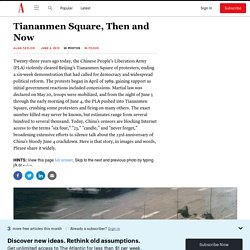 The protests began in April of 1989, gaining support as initial government reactions included concessions. Martial law was declared on May 20, troops were mobilized, and from the night of June 3 through the early morning of June 4, the PLA pushed into Tiananmen Square, crushing some protesters and firing on many others. The exact number killed may never be known, but estimates range from several hundred to several thousand. Today, China's censors are blocking Internet access to the terms "six four," "23," "candle," and "never forget," broadening extensive efforts to silence talk about the 23rd anniversary of China's bloody June 4 crackdown. Here is that story, in images and words, Please share it widely.

Behind the Scenes: Tank Man of Tiananmen. Update | 12:05 p.m., Thursday, June 4. In response to this post, a fifth photographer, Terril Jones, has shared with Lens his picture of the impending confrontation, from street level. It has never before been published. Update | 10:30 a.m., Wednesday, June 3. Many readers of “Tank Man of Tiananmen” have mentioned a video of the same incident. Arthur Edelstein provided a link to the footage on YouTube. Few images are more recognizable or more evocative. Chinese Students Today Don't Know Tiananmen. 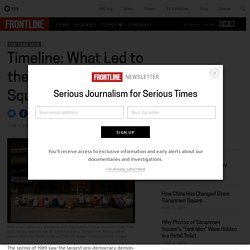 (Photo by Forrest Anderson/The LIFE Images Collection/Getty Images) The spring of 1989 saw the largest pro-democracy demonstration in the history of China’s communist regime. The following timeline tracks how the protests began in April among university students in Beijing, spread across the nation, and ended on June 4 with a final deadly assault by an estimated force of 300,000 soldiers from People’s Liberation Army (PLA).

Throughout these weeks, China’s top leaders were deeply divided over how to handle the unrest, with one faction advocating peaceful negotiation and another demanding a crackdown. ‘In the Streets, Anguish, Fury and Tears’ Thirty years after the deadly Tiananmen Square crackdown on pro-democracy demonstrators, the Chinese government has been largely successful in suppressing public knowledge of it at home. 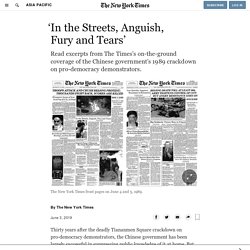 But with each passing year, more information and images come into the open elsewhere. In the last month alone, a former journalist for the Chinese military broke her silence and urged a national reckoning; a student witness revealed almost 2,000 photographs he took of the protests in Beijing; and a collection of previously secret party speeches and statements about the crackdown was published in the semiautonomous Chinese territory of Hong Kong.

“Everyone who took part must speak up about what they know happened,” said the former journalist, Jiang Lin. Here is how The Times covered the crackdown in 1989, including work by Nicholas Kristof and Sheryl WuDunn that won the Pulitzer Prize for international reporting. Biggest Beijing Crowds So Far Keep Troops From City Center; May 21, 1989, by Nicholas D. When China Massacred Its Own People. Tiananmen’s Survivors and the Burden of Memory. (21) The Gate of Heavenly Peace Part 2 - Tiananmen Square Protests. (21) The Gate of Heavenly Peace - Part 1 - Tiananmen Square Protests. Teaching Tiananmen to a New Generation. Photo Born and raised in , Rowena Xiaoqing He is best known for her research on the 1989 Tiananmen democracy movement. 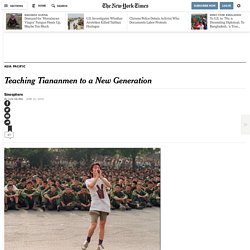 In 2010, she created a freshman seminar at called “Rebels With a Cause: Tiananmen in History and Memory,” and in 2014, she published “Tiananmen Exiles: Voices of the Struggle for Democracy in China.” In 2015, she joined the faculty of St. Michael’s College in Vermont, where she continues to offer the seminar. While her work has won respect from fellow scholars, it has made her a target of attacks by young “patriotic” Chinese. What prompted you to research the Tiananmen movement? Our generation grew up in an atmosphere of idealism. What’s the biggest challenge teaching Tiananmen? As a result of the government’s cover-up, the history of 1989 has become obscured.

How did you deal with this? Presenting evidence. Harvard’s Tiananmen archive has 28 boxes of material. The archive contains boxes of photographs. Why do students take this course? Remembering Tiananmen Square. AP ImagesA Chinese protestor blocks a line of tanks heading east on Beijing’s Cangan Blvd. 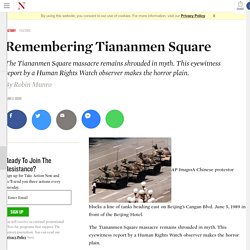 June 5, 1989 in front of the Beijing Hotel. The Tiananmen Square massacre remains shrouded in myth. This eyewitness report by a Human Rights Watch observer makes the horror plain. Weekly Poem: ‘Massacre’ By Liao Yiwu, Translated by Wenguang Huang(Composed on the morning of June 4, 1989)Dedicated to those who were killed on June 4, 1989Dedicated to the 200th anniversary of the French Revolution Leap! 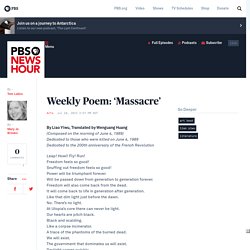 Howl! Fly! Run! Freedom feels so good! We stand in the midst of brilliance but all people are blind. In this historically unprecedented massacre only the spawn of dogs can survive. Liao Yiwu is a writer, musician and poet from Sichuan, China. Tales of Army Discord Show Tiananmen Square in a New Light.