President Trump's failure to fight climate change is a crime against humanity (Opinion) Trump remains in willful denial of the thousands of deaths caused by his government's inept, under-funded, and under-motivated response to Hurricane Maria in Puerto Rico in 2017. 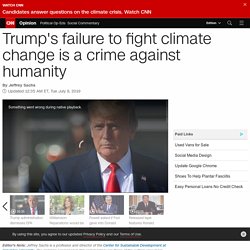 The image that will remain in history is of the President gleefully throwing paper towels for a photo op as the people of Puerto Rico around him suffered and died of neglect. In September, 2018 Hurricane Florence claimed at least 48 lives, with more likely to come in its aftermath. Last month, Hurricane Michael claimed at least 32 lives, with more than a thousand people reportedly still missing. The final death toll will likely soar in the months ahead as the residual consequences of the storm become more clear.

As the Earth warms due to the continued burning of coal, oil, and gas, climate-related disasters that include high-intensity hurricanes, floods, droughts, extreme precipitation, forest fires, and heat waves, pose rising dangers to life and property. USA TODAY's Editorial Board: Trump is 'unfit for the presidency' We haven't made a voting recommendation in 34 years. For this election, we made an exception. In the 34-year history of USA TODAY, the Editorial Board has never taken sides in the presidential race. Instead, we’ve expressed opinions about the major issues and haven’t presumed to tell our readers, who have a variety of priorities and values, which choice is best for them.

Because every presidential race is different, we revisit our no-endorsement policy every four years. Donald Trump Reports He’s Getting Richer as President. Inside the Secret Border Patrol Facebook Group Where Agents Joke About Migrant Deaths and Post Sexist Memes. ProPublica is a nonprofit newsroom that investigates abuses of power. 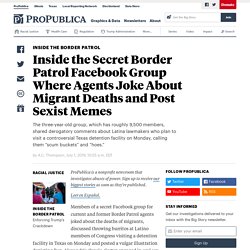 Sign up to receive our biggest stories as soon as they’re published. Members of a secret Facebook group for current and former Border Patrol agents joked about the deaths of migrants, discussed throwing burritos at Latino members of Congress visiting a detention facility in Texas on Monday and posted a vulgar illustration depicting Rep. The Inhumane Conditions at Migrant Detention Camps.

A Central American migrant family recently released from federal detention waits to board a bus in McAllen, Texas, on June 12. 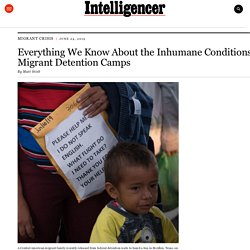 Photo: LOREN ELLIOTT/AFP/Getty Images. Mike Pence Says Filthy Detention Facilities Heartbreaking, But It's All On Congress. Vice President Mike Pence said in an interview Sunday that reports of atrocious conditions at migrant detention centers along the southern border were “heartbreaking,” but failed to take any responsibility. 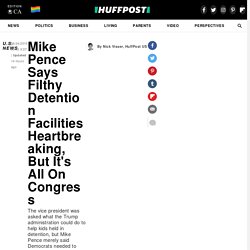 He said the Trump administration could do little to address the lack of basic sanitation at the facilities because of Congress. Pence spoke with CBS’ “Face the Nation” on Sunday, where he was asked about accounts from attorneys who last week told The Associated Press and The New York Times that some migrant kids had been held without basic sanitation needs for more than a month at a border patrol station in Texas. 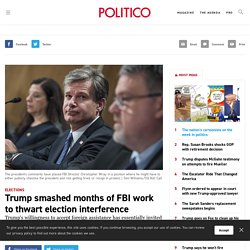 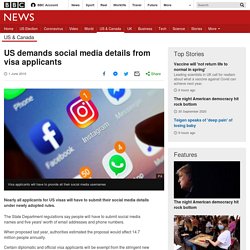 The State Department regulations say people will have to submit social media names and five years' worth of email addresses and phone numbers. 'I'm A Holocaust Survivor—Trump's America Feels Like Germany Before Nazis Took Over' Stephen B. 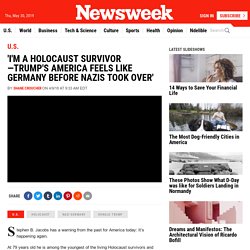 Jacobs has a warning from the past for America today: It’s happening again. At 79 years old he is among the youngest of the living Holocaust survivors and was born six years after Adolf Hitler came to power in Germany. But Jacobs can remember life in the Nazi concentration camp at Buchenwald; what the Nazis did to him, his family, his friends. He worries about what’s happening right now in America, where he has lived and prospered since arriving a couple of years after Buchenwald’s liberation on April 11, 1945. The American far-right appears emboldened since the election of President Donald Trump, who led an inflammatory, nationalist campaign.

An image of Stephen Jacobs taken after the war and published in a Swiss publication. Some on Mueller’s Team Say Report Was More Damaging Than Barr Revealed. Some on Mueller’s Team See Their Findings as More Damaging for Trump Than Barr Revealed. Thread by @kurteichenwald: "1. With each passing year, people gain a better understanding of what I was writing in my coverage of Trump-Russia before the election. This.

How Trump fulfilled a 30-year fantasy of becoming president, with a little help from the Kremlin - The Correspondent. Why Vladimir Putin’s Russia Is Backing Donald Trump. In phone calls, meetings and cables, America’s European allies have expressed alarm to one another about Donald Trump’s public statements denying Moscow’s role in cyberattacks designed to interfere with the U.S. election. 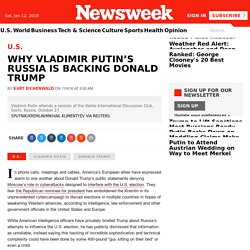 They fear the Republican nominee for president has emboldened the Kremlin in its unprecedented cybercampaign to disrupt elections in multiple countries in hopes of weakening Western alliances, according to intelligence, law enforcement and other government officials in the United States and Europe. Trump Administration to Lift Sanctions on Putin-linked Oligarch’s Companies and the Bank Linked to Trump Tower Moscow Project Will Benefit. After eight months of lobbying to be taken off the U.S. sanctions list, companies tied to the Russian aluminum magnate Oleg Deripaska got their wish on Wednesday. 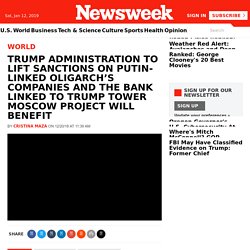 The Treasury Department notified Congress on Wednesday that it plans to remove three companies belonging to Deripaska, a Russian oligarch with close ties to Russian President Vladimir Putin, from the sanctions list on the condition that Deripaska relinquishes control over his companies. Deripaska was sanctioned in April 2018, along with six other Russian oligarchs, for supporting Russia’s efforts to meddle in the internal affairs of Western governments and for a handful of other offenses related to Russia’s activities in Syria and Ukraine.

Trump Literally Did Not Understand What a Shutdown Would Do. Trump administration did not understand chaos they would create before president shut it down: report. Russia Picked Donald Trump and Ran Him for President, Former Israeli Intelligence Officer Says. Russia chose Donald Trump as the U.S. presidential candidate who would be most advantageous to Moscow, and used online tactics to win him the presidency, according to a former agent of the Israeli intelligence agency the Mossad. 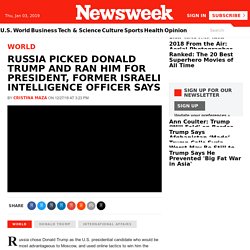 "Officials in Moscow looked at the 2016 U.S. presidential race and asked, ‘Which candidate would we like to have sitting in the White House?