Opinion: If Trump pardons himself now, he'll be walking into a trap. Transcript and audio: Trump call with Georgia Sec. of State Brad Raffensperger. Is Trump Cracking Under the Weight of Losing? “His fragile ego has never been tested to this extent,” Michael Cohen, his former personal attorney and enforcer before he turned on him, told me. 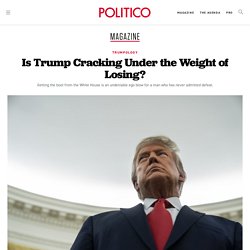 “While he’s creating a false pretense of strength and fortitude, internally he is angry, depressed and manic. A Populism Deferred - American Compass. Although Joe Biden advertised himself as a “transitional candidate” during the 2020 campaign, Donald Trump will probably be remembered as the transitional president. 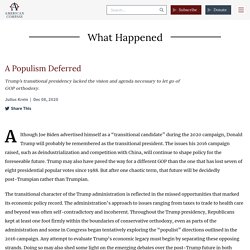 The issues his 2016 campaign raised, such as deindustrialization and competition with China, will continue to shape policy for the foreseeable future. Trump may also have paved the way for a different GOP than the one that has lost seven of eight presidential popular votes since 1988. But after one chaotic term, that future will be decidedly post-Trumpian rather than Trumpian. The transitional character of the Trump administration is reflected in the missed opportunities that marked its economic policy record. The administration’s approach to issues ranging from taxes to trade to health care and beyond was often self-contradictory and incoherent.

The Failure of Trump’s Tax Cuts The reasons for this unpopularity are not difficult to grasp. By contrast, the tax increases imposed by the TCJA offer a generally positive legacy. Trump Strutted Like a Player, But Also Got Played. Photographer: Al Drago/Getty Images Anyone still clinging to the idea that Donald Trump is a crafty strategist who furthered his goals by corrupting everyone around him during an unspooled and vindictive presidency might want to consider, instead, that Trump himself was often gamed — at least when it comes to some of the signature policies that will define his administration. 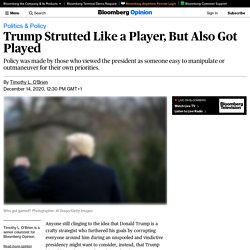 To be sure, Trump unleashed torrents of dangerous vitriol that made it safe for his party and supporters to embrace racial, economic and cultural divisions more openly and enthusiastically. And Trump’s stagecraft was certainly sui generis, tethered to outre mythmaking and serial fabulism. But apart from propagating a cult of personality, Trump’s performance art rarely revolved around policy debates or goals. What the Science of Addiction Tells Us About Trump. Although these are new findings and the research in this area is not yet settled, what this suggests is that similar to the way people become addicted to drugs or gambling, people may also become addicted to seeking retribution against their enemies—revenge addiction. 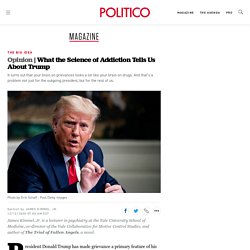 This may help explain why some people just can’t let go of their grievances long after others feel they should have moved on—and why some people resort to violence. It’s worth asking whether this helps explain Trump’s fixation on his grievances and ways of exacting retribution for them. The hallmark of addiction is compulsive behavior despite harmful consequences. Trump’s unrelenting efforts to retaliate against those he believes have treated him unjustly (including, now, American voters) appear to be compulsive and uncontrollable. The harm this causes to himself and others is obvious but seems to have no deterrent effect.

The long love affair between Fox News and Trump may be over. Here’s how it all soured last week. Seeing a Bloomberg Ad on Fox News, Trump Takes the Bait. But Mr. 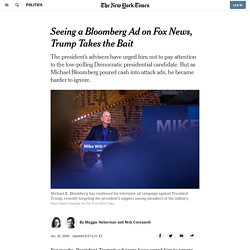 Bloomberg’s advisers see a void that the candidate is filling, in a primary race during which the candidates have sometimes struggled with whether to depict Mr. Trump as an existential threat or to ignore him altogether. Trump Tries to Walk Back Entitlement Comments as Democrats Pounce. Despite that promise, Mr. 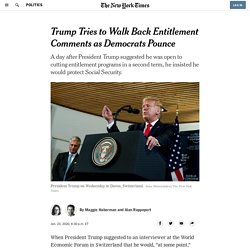 Trump has made several moves to chip away at America’s social safety net programs. The Trump administration has already tried to cut food stamps, rental assistance for low-income housing, and Medicaid through efforts to repeal the Affordable Care Act, said Chye-Ching Huang, the director of federal fiscal policy at the left-leaning Center on Budget and Policy Priorities. The most recent White House budget proposed a $10 billion cut to the Social Security Disability Insurance program, which provides benefits to disabled workers. “This is just the latest of many instances of the Trump administration making clear through statements, budgets, legislation and administrative actions that their basic policy goal is tax cuts for the well-off hand-in-hand with targeting critical programs, including those that support low- and moderate-income people,” Ms.

Huang said. The programs themselves face a financial predicament. - The Washington Post.

Imigration. Wash Post expose on Secrets of Trump’s Success – JonathanGreenberg.com. - The Washington Post. Dear Mister President: No Day for Clowns or Criminals. Friday, 7 June 2019 Dear Mr President, There are occasions when I have to drop the ironic mask. 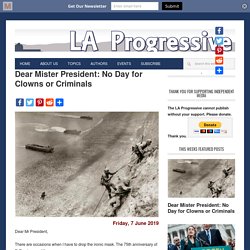 The 75th anniversary of D-Day is one of them. When my classmates and I were at West Point in the early 60’s, many of the officers who were our professors and superiors were veterans of World War II and the Korean War. A few had already been to Viet Nam. It mattered that a chemistry professor had won a silver star. We outwardly viewed those veterans with the cocky skepticism that kids just out of adolescence commonly assume toward authority figures in their 40s, but inwardly we held them in awe: they had done things we did not yet know we could do. It was these simple ideas, more than the flag and patriotic music, that carried soldiers across the beach and up the cliff. So D-Day was not for you. - The Washington Post.

- The Washington Post. - The Washington Post. Trump Tantrums the Dems Out of a Trap. Trump seems to be transparently mad. Trump Jumps Into Impeachment Fray With Both Feet. Pelosi says Trump wants to be impeached and is angry that House Democrats are not moving in that direction. Trump Walks Out on Pelosi and Schumer After 3 Minutes. Trump’s broadside at Democrats on NAFTA 2.0 reveals a big weakness. The first round of China tariffs already stifled U.S. exports. The dirty little secret of the ‘Trump Doctrine’: There isn’t one.

Business at Trump's Doral club is declining. As Trump blunders into disaster, Adam Schiff sounds the alarm. The misleading narrative in Trump’s tumble of trade tweets. Trump says he knows everything. So why do his decisions look so dumb? Trump: 'We are in a fantastic position' in trade war with China. 5 Takeaways From 10 Years of Trump Tax Figures – The New York Times. Decade in the Red: Trump Tax Figures Show Over $1 Billion in Business Losses. By the time his master-of-the-universe memoir “Trump: The Art of the Deal” hit bookstores in 1987, Donald J. 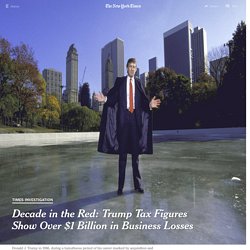 Trump was already in deep financial distress, losing tens of millions of dollars on troubled business deals, according to previously unrevealed figures from his federal income tax returns. Mr. Trump was propelled to the presidency, in part, by a self-spun narrative of business success and of setbacks triumphantly overcome. He has attributed his first run of reversals and bankruptcies to the recession that took hold in 1990.

But 10 years of tax information obtained by The New York Times paints a different, and far bleaker, picture of his deal-making abilities and financial condition. The data — printouts from Mr. The numbers show that in 1985, Mr. In fact, year after year, Mr. Over all, Mr. Since the 2016 presidential campaign, journalists at The Times and elsewhere have been trying to piece together Mr. The White House’s response to the new findings has shifted over time. Mark J. Trump Lost More Money Than Any American for 10 Years, Says Tax Info. Royal Babies. Donald Trump is a baby. 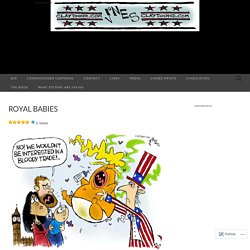 The man whined over college athletes not “thanking him enough” after he had China release them from jail for shoplifting. He whined last week over Twitter removing bots from his followers, which puts him even further behind Obama in another area. After latest threats, Chinese see Trump as a Marvel villain out to destroy them. Voters have had it with Trump. Why Donald Trump lies: a psychoanalyst’s theory - FT Weekend. Trump is floundering disastrously on multiple fronts. Stop pretending he’s in control.

Donald Trump’s Unhinged Obsession with “a Man Named John McCain” For the first ten minutes or so, the speech that Donald Trump delivered at the Lima Army Tank Plant in Fort Shawnee, Ohio, on Wednesday afternoon, was standard fare. 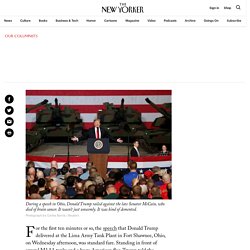 Standing in front of several M1A1 tanks and a huge American flag, Trump told the assembled workers that they should love him because he had kept the plant open when its future had been in doubt. He said that he had wanted to get into one of the tanks but had thought of Michael Dukakis, the Democratic Presidential candidate in 1988, and how “he tanked when he got into a tank.” Trump also boasted about the “incredible” job he was doing with the economy, and held up a map of Iraq and Syria with no ISIS positions marked on it.

He repeated his recent criticism of General Motors for shuttering an auto plant in Lordstown, Ohio. Lordstown is “a great area,” he said, adding, “I guess I love it because I won so big there.” What explains Trump’s mental strain? His facade is showing fresh cracks. Trump blames union leader for GM job cuts in Ohio — jobs the president once vowed he’d save. A church service on a blue-skied Sunday interrupts Trump’s weekend of presidential pique. Trump is getting worse. And Republicans’ rationalizations are getting weaker.