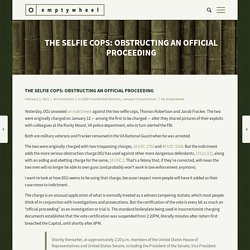 The two were originally charged on January 12 — among the first to be charged — after they shared pictures of their exploits with colleagues at the Rocky Mount, VA police department, who in turn alerted the FBI. Both are military veterans and Fracker remained in the VA National Guard when he was arrested. The two were originally charged with two trespassing charges, 18 USC 1752 and 40 USC 5104. But the indictment adds the more serious obstruction charge DOJ has used against other more dangerous defendants, 1512(c)(2), along with an aiding and abetting charge for the same, 18 USC 2. Police SUV seen plowing through crowd in Tacoma, Washington.

D.C. Police Lose Control Of Rioting Trump Supporters After Hundreds Of Officers Called Away To Deal With Black Jaywalker. Capitol Riot Makes Issue of Trump Sympathizers in Law Enforcement More Urgent. BRENDAN SMIALOWSKIGetty Images The story of Wednesday's insurrection at the Capitol continues to get worse. 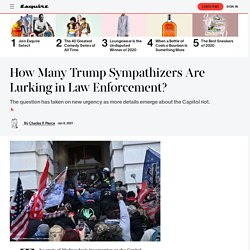 There is a slow but steady accumulation of evidence that, in some major ways, there may have been help on the inside. From the Washington Post: In memos issued Monday and Tuesday in response to a request from the D.C. mayor, the Pentagon prohibited the District’s guardsmen from receiving ammunition or riot gear, interacting with protesters unless necessary for self-defense, sharing equipment with local law enforcement, or using Guard surveillance and air assets without the defense secretary’s explicit sign-off, according to officials familiar with the orders. Police Tackled and Arrested an NPR Reporter While She Was Doing Her Job. Los Angeles police say that a reporter was interfering with an arrest Saturday night when they shoved her to the ground, handcuffed her, and took her to jail. 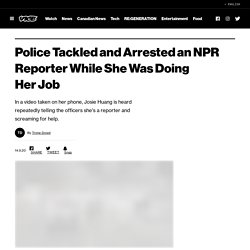 But at least two different videos of the incident seem to show that’s not what happened. The journalist, LAist and NPR reporter Josie Huang, was in police custody for over five hours Saturday night into Sunday morning, covered in bruises and scrapes following her arrest outside the St. Kenosha gunman arrested for murder after cops let him flee out of state. Police Didn’t Spend Millions On Awesome Tank Just To Let Protests Stay Peaceful. LOS ANGELES—In response to concerns that law enforcement officers were escalating violence in the nationwide George Floyd uprisings, Los Angeles Police Department officials announced Tuesday that they didn’t spend millions on an awesome tank just to let protests stay peaceful. 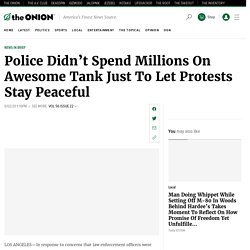 “We got the city to drop, like, $10 million on this sick tank and you expect we’ll just let people stand there chanting?” Said LAPD chief Michael Moore, adding there was “no way in hell” that the department would let something like peaceful demonstrations stop them from making use of the vehicle’s “totally tricked-out” weapons system, armor, and ability to ram through virtually everything in its path. “I mean, the city wouldn’t buy a teacher a pencil and then tell them not to use it, right? Police Department Celebrates Fourth Of July By Using Fireworks For Crowd Control. LRAD Sound Cannon - How Does LRAD Work. Audio producer Cory Choy was reporting on the 2014 Black Lives Matter protests in New York City when he first experienced sound as a weapon. 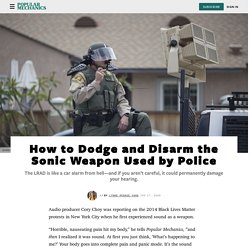 “Horrible, nauseating pain hit my body,” he tells Popular Mechanics, “and then I realized it was sound. At first you just think, ‘What’s happening to me?’ Your body goes into complete pain and panic mode. It’s the sound equivalent of looking into the sun.” Despite his professional-grade headphones, the effect of the weapon—a long-range acoustic device, or LRAD—was so disorienting at first that Choy couldn’t tell which way to run and was forced to randomly pick a direction. Buffalo Police Request Reinforcements Until Elderly-Man Rampages Fully Contained. BUFFALO, NY—Calling the various geriatric protestors the “greatest threat to officers thus far,” the Buffalo Police Department requested reinforcements Friday until the frail elderly men rampaging through their city were fully contained. 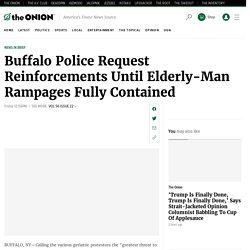 “Due to the terrifying influx of senior citizens recklessly hobbling through the streets and shamelessly blocking crosswalks, the Buffalo Police Department has no choice but to ask neighboring law enforcement agencies for immediate, emergency assistance,” said Buffalo Police captain Jeff Rinaldo, who added that the out-of-control elderly men were made even more dangerous because of their hearing loss, making it impossible for many of them to respond to verbal commands. “Do not be fooled.

While they may appear peaceful, these 75-, 80-, and 90-year-old men are armed with canes that could inflict serious harm, as well as walkers that could be used to bludgeon. Police are going to ridiculous extremes in attempts to justify using violence against protesters. If you’re going to justify all those tanks, body armor, and storm trooper helmets, it certainly helps to have a threat—even a make believe threat. 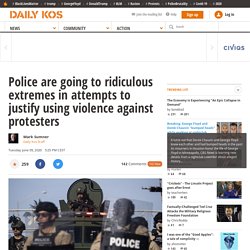 And lots of make-believe crimes. Cops slash dozens of car tires, then lie about why they did it. Minnesota State Troopers and deputies from the Anoka County Sheriff’s Office thought it was a good idea to slash tires of unoccupied parked cars during a protest in Minneapolis. 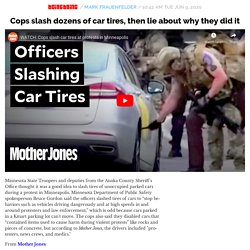 Minnesota Department of Public Safety spokesperson Bruce Gordon said the officers slashed tires of cars to “stop behaviors such as vehicles driving dangerously and at high speeds in and around protesters and law enforcement,” which is odd because cars parked in a Kmart parking lot can't move. The cops also said they disabled cars that “contained items used to cause harm during violent protests” like rocks and pieces of concrete, but according to Mother Jones, the drivers included "protesters, news crews, and medics. " Minnesota Cops Admit To Slashing Protesters' Tires. At some point in the past few decades we seem to have slipped through Alice's Looking Glass and now live in some dystopian Orwellian world where Donald Trump is president and cops do things like "strategically deflate tires" by puncturing them, then lying about it, and then when presented with video proof lie some more about how the cars contained rocks and other weapons (none of them did, of course). 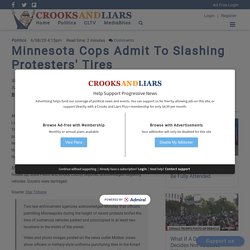 And finally, at the very last, admitting they did it, but using their Orwellian double-speak to justify their lawlessness. Mother Jones captured their bullshit and wrote about it. On Monday, the cops fessed up, State Patrol and Anoka County deputies acknowledged targeting vehicles. Police Defend Use Of Non-Lethal Rubber Tires On Protestors. NEW YORK—Responding to criticisms of law enforcement injuring demonstrators, NYPD chief Terence Monahan publicly defended his squad’s controversial use of non-lethal rubber tires Wednesday as a means of de-escalating ongoing protests against police brutality. 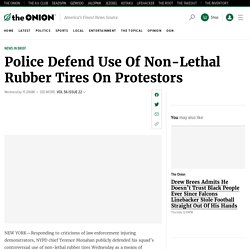 Buffalo Police Shove Man to Ground, Walk By Him as He Bleeds From Head. You hear a lot about "bad apples" these days from folks reluctant to confront the possibility that the problems in American policing are systemic. It's just a few bad cops! Never mind that the original expression reads, "A few bad apples spoil the whole bunch. " And never mind that we can no longer indulge this.

The way cops are trained in this country, the way they are outfitted like they're deploying to Fallujah, the culture of ass-covering over accountability, the lying, the hardliner union chiefs and the extreme rhetoric—it has led to insanity. NYPD Officer Hopes Black Teen Only Coughing Because He Just Choked Him. Two Buffalo Police Officers Suspended After Staining Clean Sidewalk With Blood. BUFFALO, NY—After a video of the incident received national attention, Buffalo mayor Byron Brown confirmed Friday the suspension without pay of two policemen who were caught staining an otherwise spotless section of city sidewalk with blood.

“I have seen the video and am deeply disturbed by the actions of these officers, who not only spilled a significant amount of blood on an otherwise pristine square of pavement, but then casually moved along without making the slightest attempt to clean it up,” said Brown, adding that once a bloodstain like that had set, it was practically impossible to remove completely. FBI Asks People To Send Evidence Of Violence During Protests, Gets Videos And Pics Of Police Violence In Response. Bored Panda spoke to the front-line protester Kiki who shared the first-person account of what happened during the protests from Friday to Sunday. “I packed up a grandma cart with Gatorade, water, snacks, and hand sanitizer and took it out to the White House/Lafayette square to hand out to protesters.” Kiki also said that “these protests have been VERY peaceful during the day.

What I have witnessed was very diverse groups of protesters (all ages, races, backgrounds) who were passionate, loud, and angry, but peaceful.” The Most Revealing Footage On Police Brutality Is These Cops Applauding Its Perpetrators. Among the constant deluge of police brutality footage flooding the internet as America’s armed goon patrol responds to the Black Lives Matter protests across the nation, there is one video which stands out above all the others in illustrating just how pervasively violent police culture is. Curiously enough, this video itself contains no police brutality. The video clip in question shows the outside of the Buffalo City Courthouse, where members of the police and fire unions awaited the two officers who hospitalized a 75 year-old peace activist named Martin Gugino by shoving him to the ground.

When the two officers exited the courthouse, released on their own recognizance, and were met with applause from the crowd. From tear gas to rubber bullets, here’s what ‘nonlethal’ weapons can do to the body. Civil unrest in the wake of George Floyd's death has spread around the world, and in some places, protesters are being met with tear gas, rubber bullets, stun guns, and other tactics intended to control crowds without taking lives. Kentucky barbecue owner and ‘community pillar’ shot dead by police—police chief fired. McAtee’s sister spoke to local news station Wave 3, telling them that her brother “didn’t hurt nobody. A Short History of U.S. Law Enforcement Infiltrating Protests. They wanted her to flinch, beg, to break as they used police batons on her. She would not. ‘Hit her! Hit her!’ Indianapolis cops batter black protester with batons and pepper bullets. Reports and video reveal police destroying and ‘looting’ critical medical supplies during protests.

Police in Charlottesville criticized for slow response to violent demonstrations. Violence breaks out before planned white nationalist rally. Huffingtonpost. Berkeley cops use rubber bullets, tear gas to disperse protests against police brutality. Cops fire pepper balls into crowd to break up Phoenix protest against police brutality. Race relations in America and the case of Ferguson. Onthestreetsofamericaamnestyinternational.pdf. 7 Important Details Nobody Mentions About Ferguson. At least 6 Ferguson officers apart from Brown shooter have been named in lawsuits.

Guantanamo Bay: The model for an American police state? US Police Train with Foreign Militaries to Crackdown on Dissent. CNN anchor’s Ferguson idea: Why not use water cannons on the protesters? In Ferguson the violence of the state created the violence of the street. CONFIRMED: Cop Who Threatened Ferguson Protesters Is Lt. Ray Albers.