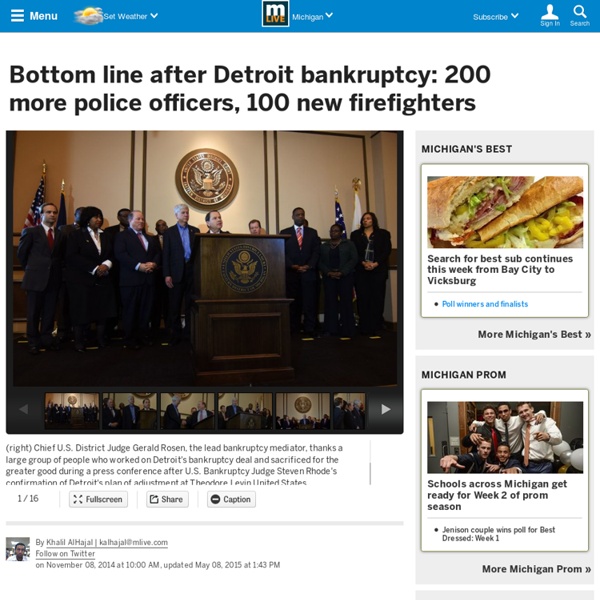 Chief U.S. District Judge Gerald Rosen, lead Detroit bankruptcy mediator on adjustment plan Chief U.S. District Judge Gerald Rosen, the lead bankruptcy mediator, thanks a large group of people who worked on Detroit's bankruptcy deal and sacrificed for the greater good during a press conference after U.S. Bankruptcy Judge Steven Rhode's confirmation of Detroit's plan of adjustment at Theodore Levin United States Courthouse in Detroit, Nov. 7, 2014 (Tanya Moutzalias | MLive Detroit) DETROIT, MI -- The city can now afford to hire more police and firefighters. That's the bottom line after a 16-month court process that came to a triumphant climax Friday with Detroit being authorized to shed $7 billion of debt. "There are going to be more than 200 additional police officers on the street as a result of the plan," said Mayor Mike Duggan. Implementation of an elaborate, 10-year plan to restore long-broken city services is now possible after U.S. Others complied for fear of deeper cuts.

Detroit police struggle to protect bankrupt city Aug 26, 2013 By Gina Damron Detroit Free Press DETROIT — Wind whipped through downed windows and the speedometer reached 90 m.p.h. as the police cruiser sped down the interstate. Weaving through traffic, Detroit Police Officers Derrick Keasley and Darius Shepherd rushed to reach other officers, who were miles away chasing down a suspect in a neighborhood off Van Dyke. It was about 9 p.m. on a warm evening this month as the special operations officers tromped through high grass, then came to a yard, where they handily climbed a rusty chain link fence and landed next to a dilapidated and abandoned building. This suspect was gone, but the shift was hours from over. Night after night, Detroit police officers are tasked with patrolling one of the most dangerous cities in America. The officers are working in a city so broke it filed for bankruptcy on July 18, citing more than $18 billion in unfunded liabilities. They patrol in run-down cruisers, sometimes with broken equipment. "Made location.

businessinsider Private citizens pick up the slack as Detroit cuts public services With the city of Detroit now $2.5 billion in debt and the cancellation of city services, teams of private citizens are helping to provide basic services. To avoid bankruptcy, the city is being run by an independent emergency manager. Payments on unsecured debt were already canceled last month in an effort to save money and spend what they have on services such as the police force and fire departments. But with the lack of funds come the dismissal of several city services, which has spurred a measure of civic pride, Fox News reports. After the city abandoned a long awaited light-rail project, 26-year-old Andy Didirosi was “pissed” and chose to fund a transportation plan himself. A self-described “gearhead,” Didirosi had several old Greyhounds and school buses on hand and started the Detroit Bus Company, Fox reports. Not only has Didirosi provided a transportation route in the original location that the plan proposed, he has provided another route to the Detroit Metropolitan Airport.

A City in Remission: Can the “Grand Bargain” Revive Detroit? - Non Profit News For Nonprofit Organizations Editors’ note: This article was the last that Rick Cohen wrote for the Nonprofit Quarterly, and it was one of his most ambitious in its weaving of political, philanthropic, and community intentions, partnerships, and realities. Rick died suddenly just as we were beginning our edit, and we were left with the sad task of doing the best we could without his input—any errors of fact should be put down to the editors, and life’s interruptions of this process. That said, this case study of an historic interplay between the sectors to try to save a city, and the intended and unintended consequences that resulted, is sure to become a classic. It can be found in the Nonprofit Quarterly’s winter 2015 edition, “When the Show Must Go On: Nonprofits & Adversity.” Donna Murray-Brown, CEO of the Michigan Nonprofit Association, lives the duality experienced by many Detroiters faced with tough decisions to make for the city’s economic recovery. A History of Unrealized Plans and Hopes Leadership. 1. 2.

9 ways Detroit is changing after bankruptcy When Detroit filed for bankruptcy last July, observers around the world were shocked by how far some city services had deteriorated -- though it was no secret to residents. Average police response times clocked in at almost an hour. Tens of thousands of broken streetlights meant entire streets go dark at nightfall. And though Detroit has more than 200 municipal parks, the city could only afford to keep about a quarter of them open. How has the city changed since it entered bankruptcy? The Detroit Police Department says it is focused on hiring non-uniformed administrative staff so that it can move officers from desk duty to street patrols to concentrate on high-crime areas and react in real time to crime trends. A nonprofit group also was set up to administer $8 million in private donations from companies including Penske Corp. and Detroit's automakers that purchased and delivered 100 new police squad cars and 23 new ambulances — a boost to a city fleet that's old and prone to breakdowns.

Detroit bus drivers speak out on bankruptcy, crisis in city bus system “What you have now is not a true government, it is a dictatorship” By our reporters 21 December 2013 For four years, Detroit residents have seen the already grossly inadequate public bus system gutted by cuts in public funding. Bus service in the city is now in daily acute crisis. Many workers have lost their jobs or faced disciplinary measures because buses on major routes are chronically late or so full they cannot pick up passengers. The city is currently under the control of Emergency Manager Kevyn Orr, who has been appointed and given full governing powers in order to slash jobs and rip up services to pay off bondholders. Detroit Mayor Dave Bing slashed the budget of the DDOT by $12.6 million and shut down numerous routes last year. On the main routes that still are operating, drivers are forced to pass up passengers waiting at stops because the coaches are full. In late October drivers called in sick or took vacation days, closing the bus system for a day. H. H.

Detroit to close 51 parks By Shannon Jones 4 February 2013 Detroit’s Democratic Party Mayor David Bing announced Friday that his administration will close 51 city parks and sharply cut back operations at recreation centers by the spring. The cuts mean that only 57 of the city’s more than 300 parks will be in operation this year. Those that remain open will see reduced staffing and maintenance. Romanowski Park in southwest Detroit is slated to be closed The park closures are in line with the plans of the Bing administration to deny services to so-called unviable neighborhoods, forcing residents to move out. One life-long Detroit resident told the WSWS, “Recreation is an important part of a child’s development. “I believe the closing of these parks is part of a plan to turn the land over to private developers at a cut-rate cost.” Brushing aside the anger of city residents over the park closures, the Bing administration proposed that community groups adopt parks and carry out maintenance such as lawn mowing.

Detroit Parks Closing: Mayor Dave Bing To Abandon 50 Recreation Areas After Belle Isle Deal Collapses | The Huffington Post Mayor Dave Bing announced on Friday that the city of Detroit will close 50 parks across the city — just days after Detroit City Council vetoed a plan he supported to lease Belle Isle to the state. Bing said during a press conference Friday morning that 50 parks will no longer receive any maintenance or recreation support from the city. Another 38 parks across Detroit will shift to limited maintenance. (See a map of the parks scheduled to close here.) However, 19 parks have been chosen in accordance with the Detroit Future City plan prepared by the Detroit Works Project, a keynote part of Mayor Bing’s administration. Plans to extend hours at six recreation centers will also be scrapped, Bing said in a release, as well as plans to hire 10 fulltime and 40 part-time employees to work on new programs at the recreation department. Despite the timing of the announcement, the mayor denied that the park closings were in any way a retaliatory political move, calling the suggestion, “stupid.