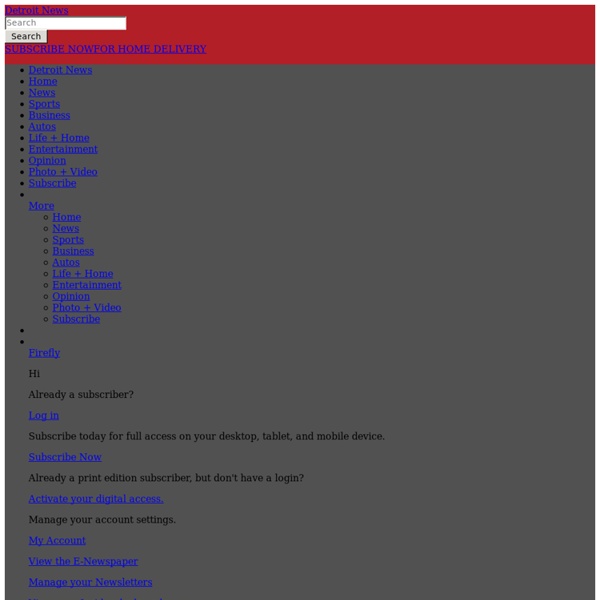 Detroit — There are fewer police officers patrolling the city than at any time since the 1920s, a manpower shortage that sometimes leaves precincts with only one squad car, posing what some say is a danger to cops and residents. Detroit has lost nearly half its patrol officers since 2000; ranks have shrunk by 37 percent in the past three years, as officers retired or bolted for other police departments amid the city's bankruptcy and cuts to pay and benefits. Left behind are 1,590 officers — the lowest since Detroit beefed up its police force to battle Prohibition bootleggers. "This is a crisis, and the dam is going to break," said Mark Diaz, president of the Detroit Police Officers Association. "It's a Catch-22: I know the city is broke, but we're not going to be able to build up a tax base of residents and businesses until we can provide a safe environment for them." Police Chief James Craig acknowledges he doesn't have as many officers as he'd like. Staffing challenges Deployment shuffle

Detroit pays high price for arson onslaught Detroit — Arson is a raging epidemic in Detroit, destroying neighborhoods and lives as the city tries to emerge from bankruptcy. Even amid a historic demolition blitz, buildings burn faster than Detroit can raze them. Last year, the city had 3,839 suspicious fires and demolished 3,500 buildings, according to city records analyzed by The Detroit News. Burned homes scar neighborhoods for years: Two-thirds of those that caught fire from 2010-13 are still standing, records show. "Nothing burns like Detroit," said Lt.

Violent crime down 13% in Detroit, FBI records show It’s been a year since Vaughn Arrington was carjacked outside his house on Pelkey in Detroit. Arrington was discussing a youth jobs program with a woman from Cleveland when a gunman assaulted the woman and drove off in Arrington’s Ford Mustang. Despite the incident, Arrington, 34, who installed video cameras on his east side property last year to record criminals, said crime is down in his neighborhood. “I’ve been the victim, but I’m telling you, things are getting better,” he said. New FBI statistics released Monday show violent crime dropped 13 percent in Detroit in 2015 compared to the year before, setting it apart from other major cities such as Chicago. The Illinois city’s spike has made violent crime there and nationwide a hot topic on the presidential campaign trail.

Detroit police struggle to protect bankrupt city Aug 26, 2013 By Gina Damron Detroit Free Press DETROIT — Wind whipped through downed windows and the speedometer reached 90 m.p.h. as the police cruiser sped down the interstate. Detroit Rising: Life after bankruptcy One year after a federal judge approves Detroit's bankruptcy exit plan, progress has been made while looming challenges remain, especially city pensions The City of Detroit has more than enough cash to pay its daily bills. Thousands of busted streetlights have been replaced. City retirees still receive pension checks, and valuable paintings remain ensconced in the gilded halls of the Detroit Institute of Arts. That's the good news. But a year after a federal judge approved a cost-cutting and reinvestment plan in the nation's largest-ever municipal bankruptcy case, Detroit's financial future still hangs in the balance.

Crumbling, Destitute Schools Threaten Detroit’s Recovery Residents wonder how the city can ever recoup its lost population and attract young families if the public schools are in abysmal shape. “As we begin to rebuild this city and we’re seeing money and development moving in, people are understanding that there is no way we can improve Detroit without a strong educational system,” said Mary Sheffield, a native of Detroit and a City Council member. “We have businesses and restaurants and arenas, but our schools are falling apart and our children are uneducated. There is no Detroit without good schools.” In protest over the conditions, teachers began a series of sickouts in recent weeks, inconveniencing many families and reducing classroom instruction time for many students who could ill afford it, but pushing the matter to the forefront.

9 ways Detroit is changing after bankruptcy When Detroit filed for bankruptcy last July, observers around the world were shocked by how far some city services had deteriorated -- though it was no secret to residents. Average police response times clocked in at almost an hour. Tens of thousands of broken streetlights meant entire streets go dark at nightfall. And though Detroit has more than 200 municipal parks, the city could only afford to keep about a quarter of them open.