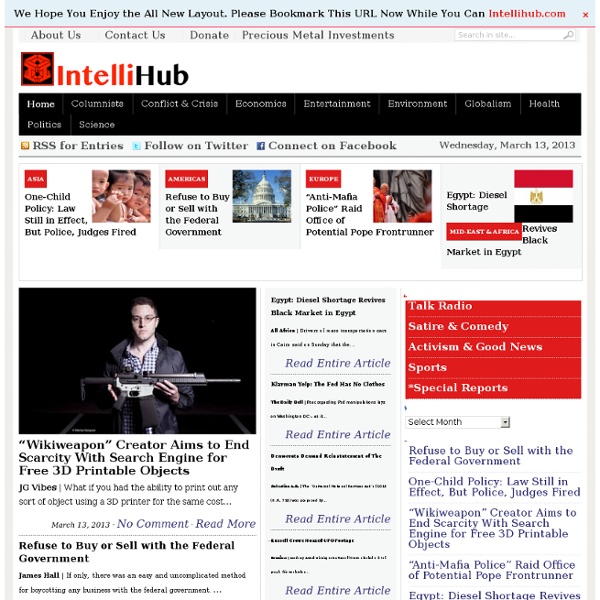 The Sky May Be Falling, But it’s Only a Storm JG Vibes | There is no doubt that we are in the midst of a storm that has been raging for centuries, and the intensity of that storm is growing by the minute. For this, we have every reason to make any and all preparations that we deem to be necessary, but we should not be consumed by fear to the point where we are considering violence or nihilism. … Trust yourself, Resist the State

Related:  Alternative News & Radio • Conspiracies, more of them... • Us doing well for all • US of A and What You may Face • Leaking & Investigating

Fukushima Forever Recent disclosures of tons of radioactive water from the damaged Fukushima reactors spilling into the ocean are just the latest evidence of the continuing incompetence of the Japanese utility, TEPCO. The announcement that the Japanese government will step in is also not reassuring since it was the Japanese government that failed to regulate the utility for decades. But, bad as it is, the current contamination of the ocean should be the least of our worries. Noam Chomsky, a Conspiracy Theorist of the Highest Magnitude: Defining Conspiracy Theory, What are the Theories Behind the Conspiracies? One of the main problems with our society is that words have lost their meaning . In spoken languages, the tone of a word can be used to make inferences that may be completely unrelated to the meaning of the word. This is especially true when dealing with propaganda. When certain people or organizations want to dismiss an argument, they tend to phrase words in such a way that makes them appear illogical or treacherous if given credence.

The Ultimate Weapon of Mass Destruction: “Owning the Weather” for Military Use Author’s Introductory Note Environmental modification techniques (ENMOD) for military use constitute, in the present context of global warfare, the ultimate weapon of mass destruction. Rarely acknowledged in the debate on global climate change, the world’s weather can now be modified as part of a new generation of sophisticated electromagnetic weapons. Both the US and Russia have developed capabilities to manipulate the climate for military use. Environmental modification techniques have been applied by the US military for more than half a century. US mathematician John von Neumann, in liaison with the US Department of Defense, started his research on weather modification in the late 1940s at the height of the Cold War and foresaw ‘forms of climatic warfare as yet unimagined’.

Jef Harvey: Healing The Matrix - Radio Show Podcast - OffPlanet Radio-Spirituality, UFOs, ET, Paranormal, Fringe Science OffPlanet Radio Live - 08-07-2013- Randy Maugans with Jef Harvey To contact Jef Harvey call: +1 570-219-2025 Jef Harvey has a background in Naval Intelligence, electronics, advanced software systems, as well as training in remote viewing and neurolinguistic programmming (NLP). He is a a technologist and healing arts practitioner, homeopathy practitioner, Board Certified in Quorom Nutrition, who is deploying emerging technologies in autoimmune disease reversal and accelerated deep tissue wound healing. Bad thinkers? Don't be so gullible! Bad thinkers? Don't be so gullible! by Lee Basham and Matthew R. X. 9 Awesome Customer Service Stories The train passenger with no toilet paper who was saved by twitter An unlucky pooper who found himself in the stall on his train without toilet paper was recently saved by the power of Twitter and awesome customer service. It seems that 16-year-old Adam Greenwood was traveling on Virgin Trains when he found himself in the no-TP predicament. Left with no other option, Ol' Train-Pooper decided to tweet the company as a gag. However, the gag turned into a real life problem solved when Virgin Trains wrote back, “Which coach, Adam?” Like Santa on Christmas morning, he was delivered a new roll and posteda picture of the roll on Instagram to prove it!

Ordeals of Whistleblowers in a 'Democracy' The more extreme the crimes of state, the more the state seeks to shroud them in secrecy. The greater the secrecy and the accompanying lies, the more vital becomes the role of whistleblowers – and the more vindictive becomes the state in its pursuit of them. Whistleblowers are people who start out as loyal servants of the state. Uncovering the Kent State Cover-Up When Ohio National Guardsmen fired sixty-seven gun shots in thirteen seconds at Kent State University (KSU) on May 4, 1970, they murdered four unarmed, protesting college students and wounded nine others. For forty-two years, the United States government has held the position that Kent State was a tragic and unfortunate incident occurring at a noontime antiwar rally on an American college campus. In 2010, compelling forensic evidence emerged showing that the Federal Bureau of Investigation (FBI) and the Counter Intelligence Program (COINTELPRO) were the lead agencies in managing Kent State government operations, including the cover-up. At Kent State, lawful protest was pushed into the realm of massacre as the US federal government, the state of Ohio, and the Ohio National Guard (ONG) executed their plans to silence antiwar protest in America. The new evidence threatens much more than the accuracy of accounts of the Kent State massacre in history books.

10 powerful corporations control most of what you consume: Food, news and more (NaturalNews) It used to be the case that there were real choices involved in purchasing food from the grocery store, buying clothes from the mall or a department store and even watching the news on television. But today, the vast majority of what people consume in all spheres of life is owned or controlled by just a handful of powerful corporations, or what authentic vernacular might dub as corporate fascism. A visual chart circulating on Reddit, for instance, reveals that a mere 10 corporations control almost all major food brands these days. 90 percent of the American mainstream media, according to a recent Frugal Dad "infographic," is now owned by just six companies, as opposed to about 50 back in 1983. And the number of major American banks in operation has diminished from about 37 back in the 1990s to just four today. As far as the mainstream media is concerned, six major companies now own almost every popular source of news and information. Sources for this article include: