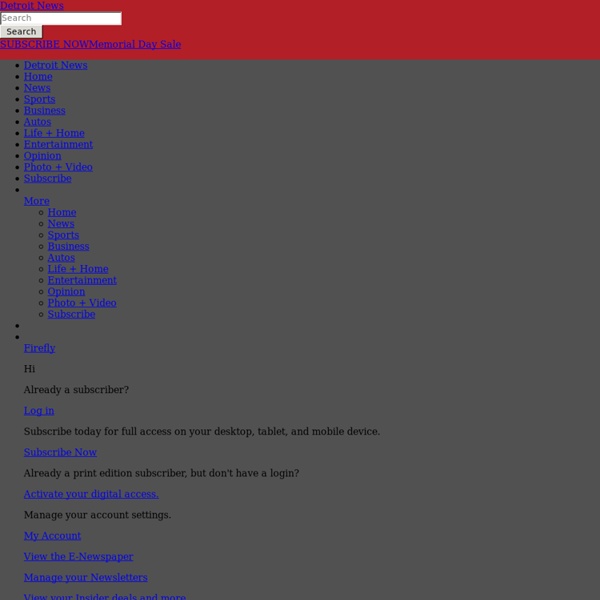 Detroit — Arson is a raging epidemic in Detroit, destroying neighborhoods and lives as the city tries to emerge from bankruptcy. Even amid a historic demolition blitz, buildings burn faster than Detroit can raze them. Last year, the city had 3,839 suspicious fires and demolished 3,500 buildings, according to city records analyzed by The Detroit News. Burned homes scar neighborhoods for years: Two-thirds of those that caught fire from 2010-13 are still standing, records show. "Nothing burns like Detroit," said Lt. Joe Crandall, a Detroit Fire Department arson investigator, referring to the city's high rate of arson. The Detroit News researched arson for more than three months and found that it remains a huge obstacle to renewal efforts following bankruptcy. Few neighborhoods were untouched by arson and the entire city bears its costs. "People don't realize arson is a felony. Arson Chief Charles Simms said the city is making progress in its long struggle with arson. 'Arson is like a cancer'

Detroit Arson A Persistent Problem As City Services Decline By Steve Neavling July 13 (Reuters) - On the night of July 4, some Detroit residents watched fireworks, and others just watched fires, more than a dozen in a space of two hours. The Independence Day blazes marked the latest flare up of a longtime scourge in Detroit - arson. It is a problem that has festered in the city for decades and has persisted even as the population declined. "It's not safe here. As firefighters attacked flames raging in two adjacent vacant houses, they called for backup equipment that never came. In the next two hours, at least 10 more suspicious fires broke out, leaving skeleton crews to battle the blazes. In Detroit, arsons are so frequent - about 5,000 estimated last year by the Detroit Fire Department - that authorities can only investigate about one of every five suspicious fire cases, Fire Commissioner Don Austin said. Detroit has a legacy of troubles with arson. The city is fighting those fires with far fewer resources than in the past.

Fire and Police How corruption deepened Detroit's crisis DETROIT -- Former Detroit Mayor Kwame Kilpatrick was a spender, a schemer and a liar. And taxpayers paid for it, by the millions. Over seven years, Kilpatrick's public corruption schemes, lavish lifestyle and ethical missteps cost taxpayers at least $20 million, a tab the financially strapped city was in no position to pick up but did anyway — usually without knowing. On Thursday, Kilpatrick will be sentenced for 24 corruption convictions. "Kilpatrick is not the main culprit of the city's historic bankruptcy, which is the result of larger social and economic forces at work for decade," federal prosecutors said in court documents. In purely monetary figures, the cost of Kilpatrick's ring of corruption is staggering: • There's the $8.4 million settlement the city coughed up in the 2007 police whistle-blower trial. • Another $9.6 million in illegal profits was pocketed over the years through crooked water and sewer contracts, the government says. When U.S. Edmunds also heard plenty at trial.

Detroit Fire Department Gets $22.5 Million Federal Homeland Security Grant, 100 Jobs Saved Over 100 Detroit firefighters scheduled to be laid off will keep their jobs thanks to a federal grant. Sen. Carl Levin (D-Mich.) announced Wednesday that the city would receive $22.5 million in funding from the Department of Homeland Security’s Staffing for Adequate Fire and Emergency Response (SAFER) program. SAFER provides grants to fire departments across the country to help keep them staffed with frontline firefighters, so they can keep their communities safe. “It is vital that we maintain the fire protection our citizens need, even during times of tight budgets,” Levin said in a release. “This grant will help keep firefighters on the job and protecting the people of Detroit.” There are 881 sworn firefighters and and 248 EMS technicians on staff in the Detroit Fire Department "There's no other city that's more deserving than Detroit," Dan McNamara, president of the Detroit Fire Fighters Association told the Detroit Free Press.

Drop Dead, Detroit! For the past twenty-one years, L. Brooks Patterson has governed Oakland County, a large, affluent suburb of Detroit. Oakland County embodies fiscal success as much as Detroit does financial ruin, and Patterson, the county executive, tends to behave as though his chief job in life were to never let anyone forget it. The landscape slid past, a jumbled time line of American suburban innovation: big-box districts, fuel megacenters, shopping malls, restaurants with the interior acreage of a factory. Patterson told me, “I used to say to my kids, ‘First of all, there’s no reason for you to go to Detroit. “That’s true,” his driver, a retired cop named Tim, muttered. Patterson just turned seventy-five. Before becoming the county executive, Patterson, a Republican, served for sixteen years as the county prosecutor. Still, he is best known for his big mouth. Lewis is Patterson’s first name, but he likes to joke that if a pretty woman in a bar asks what the “L” in “L. “Well, stop readin’ ’em.”

Anatomy of Detroit’s Decline - Interactive Feature Mayor Coleman A. Young of Detroit at an event in 1980. Richard Sheinwald/Associated Press The financial crisis facing Detroit was decades in the making, caused in part by a trail of missteps, suspected corruption and inaction. Here is a sampling of some city leaders who trimmed too little, too late and, rather than tackling problems head on, hoped that deep-rooted structural problems would turn out to be cyclical downturns. Charles E. Edward Jeffries, who served as mayor from 1940 to 1948, developed the Detroit Plan, which involved razing 100 blighted acres and preparing the land for redevelopment. Albert Cobo was considered a candidate of the wealthy and of the white during his tenure from 1950 to 1957. Coleman A. Kwame M. Dave Bing, a former professional basketball star, took office in 2009 pledging to solve Detroit’s fiscal problems, which by then were already overwhelming. Related

As Detroit breaks down, scourge of arson burns out of control Bankruptcy Casts Shadow Over Detroit's Plan To Fix Streetlights In Detroit, fewer than half of the city's 88,000 street lights actually work anymore. Quinn Klinefelter/WDET hide caption toggle caption Quinn Klinefelter/WDET Many neighborhoods in Detroit are in the dark — not because of a power outage but because fewer than half of the city's 88,000 streetlights actually work. In some parts of town, city block after city block is filled with streetlights that never come on. "At nighttime, man, this look like a ghost town," says taxi driver Howard Askew Sr., as he drives his minivan through a blighted neighborhood only half a mile from Detroit's more prosperous downtown. The 70-year-old cab driver says in this neighborhood, you can't be sure what might jump out from a darkened street corner. "They bring cars over here and strip 'em. Detroit resident Ashley Martin says she has to get her shopping done in the daytime because it's just not safe to travel at night where she lives. It's a common complaint along Detroit's city limits as well.