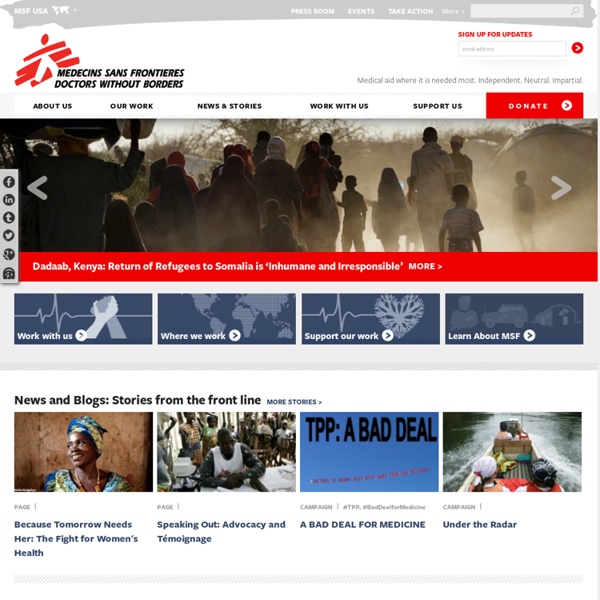 Best Firefox Download Manager Integration - FlashGot Release Notes - InformAction New to FlashGot? Learn about its features or read the FAQ! V. 1.5.5.98 Download Anything, Replay Anytime. Crowdfunding rare disease research – one family at a time If one of your loved ones was sick, what would you be willing to do to help? For millions of Americans in the US, even though they would give up anything and everything, there is no way for them to help. For many rare diseases, because they are so rare, there are no therapies or even diagnostics. What is needed is research. ALEC – American Legislative Exchange Council More than 40 years ago, a small group of state legislators and conservative policy advocates met in Chicago to implement a vision: A nonpartisan membership association for conservative state lawmakers who shared a common belief in limited government, free markets, federalism, and individual liberty. Their vision and initiative resulted in the creation of a voluntary membership association for people who believed that government closest to the people was fundamentally more effective, more just, and a better guarantor of freedom than the distant, bloated federal government in Washington, D.C. At that meeting, in September 1973, state legislators, including then Illinois State Rep.

World Relief World Relief is an international relief and development agency. Founded in 1944 as the humanitarian arm of the National Association of Evangelicals, World Relief offers assistance to victims of poverty, disease, hunger, war, disasters and persecution. Headquartered in Baltimore, Maryland, the organization has offices worldwide. It is supported by churches, foundations, and individual donors, as well as through United States Government grants from USAID and other agencies.

Fair World Project: Fair World Project (FWP) is an independent campaign of the Organic Consumers Association which seeks to protect the use of the term “fair trade” in the marketplace, expand markets for authentic fair trade, educate consumers about key issues in trade and agriculture, advocate for policies leading to a just economy, and facilitate collaborative relationships to create true system change. Fair World Project was initially launched by the Organic Consumers Association (OCA) in 2010 with an emphasis on promoting fair trade in commerce, especially in organic production systems, and protecting the term “fair trade” from dilution and misuse for mere PR purposes, as conscious consumers expand the market for fairly traded products. While still guided by the principles of fair trade, we have expanded our mission to include labor justice, sweat-free apparel and family-scale farming that does not fit the traditional fair trade model. We exist for the following reasons:

How Americans Die By Matthew C. Klein / Bloomberg View / April 17, 2014How Americans Die The mortality rate fell by about 17 percent from 1968 through 2010, years for which we have detailed data.Almost all of this improvement can be attributed to improved survival prospects for men. It looks like progress stopped in the mid-1990s… Mortality rate per 100,000 people …but that’s only because the population has aged a lot since then. Share of population This has a big effect on the overall mortality rate, because old people die sooner than the young. Mortality rate per 100,000 people by age If you divide the population into separate age cohorts, you can see that improvements in life expectancy have been broad-based and ongoing.Looking at mortality for each age cohort since 1968, we see that Americans under 25 have made the most progress.

Global Water Foundation The Global Water Foundation (GWF)is a non-profit organisation dedicated to delivering clean water and sanitation to the world's neediest communities. Professional tennis player Johan Kriek founded the organisation in 2005 after attending meetings of the World Economic Forum in Cape Town, South Africa. The goals of the GWF echo the Millennium Development Goals established at the United Nations' Millennium Summit in September 2000.[1] 40 Of The Most Powerful Social Issue Ads That’ll Make You Stop And Think Many people complain about advertisements as an obnoxious way for companies to invade our everyday lives and cram their products down our throats, but that’s not all that advertisements are good for. The advertisements on this list are excellent examples of effective advertising strategies for social issue campaigns that let their voices be heard. [Read more...]

The LifeStraw makes dirty water clean More than one billion people – one sixth of the world’s population - are without access to safe water supply. At any given moment, about half of the world's poor are suffering from waterborne diseases, of which over 6,000 – mainly children – die each day by consuming unsafe drinking water. The world’s most prolific killer though is diarrhoeal disease from bacteria like typhoid, cholera, e. coli, salmonella and many others. Safe water interventions have vast potential to transform the lives of millions, especially in crucial areas such as poverty eradication, environmental upgradation, quality of life, child development and gender equality. LifeStraw was developed as a practical response to the billions of people who are still without access to these basic human rights. View all

I.F.R.C The International Red Cross and Red Crescent Movement is an international humanitarian movement with approximately 97 million volunteers, members and staff worldwide[3] which was founded to protect human life and health, to ensure respect for all human beings, and to prevent and alleviate human suffering. The movement consists of several distinct organizations that are legally independent from each other, but are united within the movement through common basic principles, objectives, symbols, statutes and governing organisations. The movement's parts are: New Organizing Institute For Organizers, By Organizers We're a community of organizers, and we're committed to solving the biggest challenges that stand in the way of change. Our basic belief is simple: if people have the skills to engage others, the tools to build powerful campaigns, and a community of practice to help them learn and grow, they can win real change, make measurable improvements in people's lives, and restore faith in our government and our democracy. We train organizers to build and manage effective movements by integrating tried-and-true community organizing, cutting-edge digital strategy, and data-driven decision making. We provide free access to revolutionary tools, technologies, and research to help campaigns reach the next level. And we build a community of practice that connects organizers across issues, creating a more integrated, more diverse, and more dynamic movement for change.