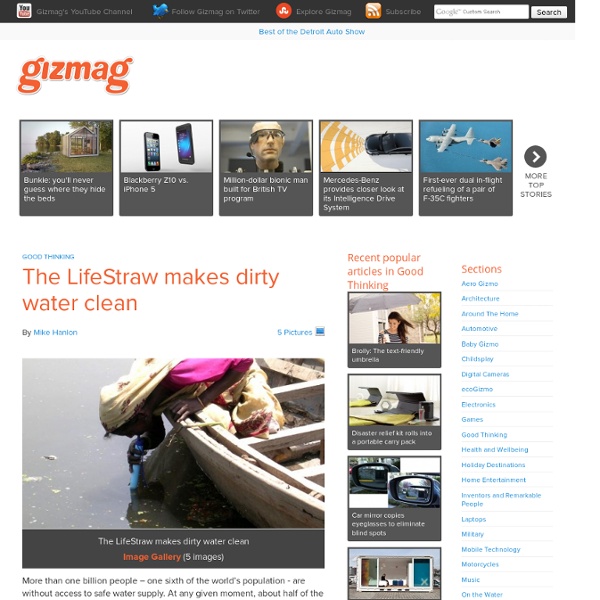 More than one billion people – one sixth of the world’s population - are without access to safe water supply. At any given moment, about half of the world's poor are suffering from waterborne diseases, of which over 6,000 – mainly children – die each day by consuming unsafe drinking water. The world’s most prolific killer though is diarrhoeal disease from bacteria like typhoid, cholera, e. coli, salmonella and many others. Safe water interventions have vast potential to transform the lives of millions, especially in crucial areas such as poverty eradication, environmental upgradation, quality of life, child development and gender equality. LifeStraw was developed as a practical response to the billions of people who are still without access to these basic human rights. View all The aptly-named LifeStraw is an invention that could become one of the greatest life-savers in history. Millions of people perish every year because they simply don’t have clean water to drink. Q1. Q2. Q3. Q4.

How Americans Die By Matthew C. Klein / Bloomberg View / April 17, 2014How Americans Die The mortality rate fell by about 17 percent from 1968 through 2010, years for which we have detailed data.Almost all of this improvement can be attributed to improved survival prospects for men. It looks like progress stopped in the mid-1990s… Mortality rate per 100,000 people …but that’s only because the population has aged a lot since then. Share of population This has a big effect on the overall mortality rate, because old people die sooner than the young. Successful strategies for reducing malnutrition among young children in East Africa? - 2010 - UNDP We analyzed the role that health programs played in improving the nutritional status of children aged five years and younger in East Africa during a period when health policies aiming to reduce malnutrition were implemented. We used several waves of Demographic and Health Surveys over the 1992–2006 period for Kenya, Rwanda, Tanzania, and Uganda. Our results show that malnutrition rates fell substantially over the sample period but that some countries then registered reversals. This finding suggests that the implementation of nutrition policies was not consistent.

survive any disaster, an archive a survival shoping list index SURVIVAL INDEX - the NUMERO UNO CONVERSATION 101 classroomEARTHQUAKE or THE GREAT DEPRE$$ION? URBAN CHAOS, STARVING MOBS, CRIME EPIDEMIC. BE READY! by Anita Sands HernandezLIVING IN Los Angeles, home of the Big One, even at a Christmas feast, DEATH will always be a guest at the table. Why? Crowdfunding rare disease research – one family at a time If one of your loved ones was sick, what would you be willing to do to help? For millions of Americans in the US, even though they would give up anything and everything, there is no way for them to help. For many rare diseases, because they are so rare, there are no therapies or even diagnostics. We Can End Malaria Drugs and Diagnostics The current treatment for malaria is artemisinin-based combination therapies (ACTs). ACTs are effective and are well-tolerated by patients, but because of their high cost, patients often purchase cheaper, less-effective drugs, poor-quality drugs, or counterfeits, all of which can increase the risk that drug-resistant strains of malaria will emerge. Resistance has already been observed in Southeast Asia. A nurse dispenses a malaria drug to treat an infected child in Tanzania

Blogs and Websites I Like! - Survival Blog With A Family Focus Email I read and follow quite a few blogs and other websites, and I wanted to share those with you. I’ve dropped them into a few major categories to make things a bit easier to keep track of. Preparedness and Survival Why an iron fish can make you stronger - BBC News When Canadian science graduate Christopher Charles visited Cambodia six years ago he discovered that anaemia was a huge public health problem. In the villages of Kandal province, instead of bright, bouncing children, Dr Charles found many were small and weak with slow mental development. Women were suffering from tiredness and headaches, and were unable to work.

Study links poverty to higher rates of malaria in kids - SciDev.Net Sub-Saharan Africa Malaria experts have long considered the disease to be affected by socioeconomic factors, so researchers from Sudan and the United Kingdom searched the literature to assess whether socioeconomic status is linked to risk of malaria among children up to 15 years old in endemic countries. Our objective was to stimulate the thinking about socioeconomic development as a malaria intervention, says Steve Lindsay, study coauthor and a disease ecologist at Durham University, United Kingdom. Lindsay and colleagues searched 4,696 studies published from 1 January 1980 to 12 July 2011 and found 15 studies with statistical data linking malaria risk and socioeconomic development defined to include household assets, household income or parents occupation. One study was conducted in Yemen and the rest focused on countries in Sub-Saharan Africa: Burkina Faso, Equatorial Guinea, Ethiopia, the Gambia, Ghana, Kenya, Malawi, Rwanda, Tanzania and Uganda. Link to full paper in The Lancet*

Cooking Kit This is the kit unpacked and if I start in the centre you can see the hobo stove in use. This is made from a SS container from a supermarket that fits nicely round the billy, there are a couple of slots cut in the sides that you can't see clearly that let the billy can bail fittings nest better. The holes drilled around the base let air in and help to create an updraught to help the fire to burn better. the main fuel feeding hole was made by drilling four holes and then cutting between them with tin snips, that’s the hardest part. To make a rest for the pot I used two SS skewers that fit through small drilled holes in the top of the hobo stove. They're bent at the ends to stop them working themselves out while you are moving the pot about but they could be left straight if you still wanted to use them as skewers. Another reason I bent mine over was to make sure they fitted inside the billy.

Rainwater and Health in Developing Countries: A Case Study on Uganda David Baguma, Syed Aljunid, Jamal Hashim, Helmut Jung and Loiskandl Willibald UN Photo/Evan Schneider Efforts to increase water supply are not an end in themselves. Nine Things to Consider When Looking For Your Survival House « Food Storage and Survival image from Seattle Municipal Archives You don’t need a bunker in a remote location in Idaho or Montana to have a home that is able to withstand an emergency situation. However, there are a few things you’ll want to consider when choosing where to live as your home is an often overlooked but important part of your preparedness efforts. If you’re looking to relocate (or just want to run your current location through a survival checkup), here are a few important things to consider that affect the security and survivability of your home. 1.

View of masculinity may increase HIV risk - Health News - redOrb July 22, 2009 Seeking medical advice, including being tested for human immunodeficiency virus, goes against many black men’s notion of masculinity, U.S. researchers say. Waverly Duck, a post doctoral associate at Yale University, said the current leading gender, masculinity and health behavior models are not relevant enough to African-American men and their distinctive notion of masculinity. Through a combination of focus groups and in-depth interviews, Duck asked African-American men about their own understanding of their gender identity and examined how that identity, as well as how it is achieved and maintained, relates to their health. Two-thirds of the participants described masculinity based on patriarchy, heterosexuality, subordination of others, economic security and physical dominance — also known as hegemonic masculinity — as the standard. Source: upi