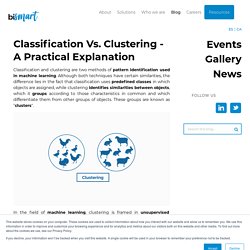 Although both techniques have certain similarities, the difference lies in the fact that classification uses predefined classes in which objects are assigned, while clustering identifies similarities between objects, which it groups according to those characteristics in common and which differentiate them from other groups of objects. These groups are known as "clusters". The 7 Most Important Data Mining Techniques. Data mining is the process of looking at large banks of information to generate new information. 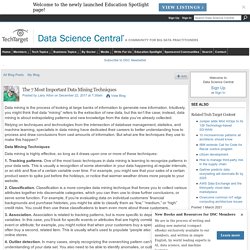 Intuitively, you might think that data “mining” refers to the extraction of new data, but this isn’t the case; instead, data mining is about extrapolating patterns and new knowledge from the data you’ve already collected. Modelling the pandemic. Devi Sridhar, professor1, Maimuna S Majumder, junior faculty2Author affiliationsCorrespondence to: D Sridhar devi.sridhar@ed.ac.uk Over-reliance on modelling leads to missteps and blind spots in our response The coronavirus pandemic has revealed much about public policy, including the extent to which politicians and their advisers rely on modelling to help predict the future of virus spread and decide what actions are best to take.1 This is true of many countries such as the US, UK, France, and Germany as well as Hong Kong, Singapore, and China. 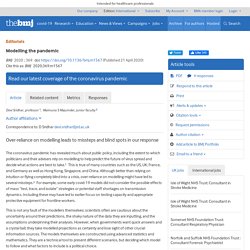 Although better than relying on intuition or flying completely blind into a crisis, over-reliance on modelling might have led to several missteps.2 For example, some early covid-19 models did not consider the possible effects of mass “test, trace, and isolate” strategies or potential staff shortages on transmission dynamics.

Quanta Magazine. There’s a quip Gary Marcus likes to use to put progress in AI into context: “Just because you can build a better ladder doesn’t mean you can build a ladder to the moon.”

To him and others, COMET’s approach suffers from a fundamental limitation of deep learning: “statistics ≠ understanding.” “You can see that [COMET] does a decent job of guessing some of the parameters of what a sentence might entail, but it doesn’t do so in a consistent way,” Marcus wrote via email. Just as no ladder, no matter how tall, can ever hope to reach the moon, no neural network — no matter how deft at mimicking language patterns — ever really “knows” that dropping lit matches on logs will typically start a fire. Choi, surprisingly, agrees. She acknowledged that COMET “relies on surface patterns” in its training data, rather than actual understanding of concepts, to generate its responses. Is the chilling truth that the decision to impose lockdown was based on crude mathematical guesswork?

It has become commonplace among financial forecasters, the Treasury, climate scientists, and epidemiologists to cite the output of mathematical models as if it was “evidence”. 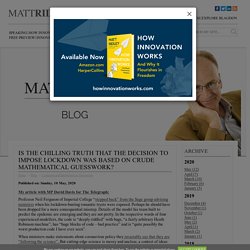 The proper use of models is to test theories of complex systems against facts. If instead we are going to use models for forecasting and policy, we must be able to check that they are accurate, particularly when they drive life and death decisions. This has not been the case with the Imperial College model. At the time of the lockdown, the model had not been released to the scientific community. When Ferguson finally released his code last week, it was a reorganised program different from the version run on March 16. Data science sexiness: Your guide to Python and R, and which one is best. At Springboard, we pair mentors with learners in data science.

We often get questions about whether to use Python or R – and we’ve come to a conclusion thanks to insight from our community of mentors and learners. Data science is the sexiest job of the 21st century. Data scientists around the world are presented with exciting problems to solve. Within the complex questions they have to ask, a growing mountain of data rests a set of insights that can change entire industries. Discovering open data. Opening data can be valuable for any organisation. 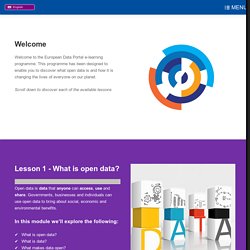 Whether to drive innovation in the business, develop a clearer picture of operations or improve products and services, a growing number of private and public sector organisations now benefit from publishing and using open data. However, opening data might require a change in the culture of an organisation. Most organisations are configured to protect their data resources, even when the benefits of openness outweigh the costs. The key to overcoming this resistance is clear: effective communication of the benefits that open data can bring. Dashboards are Dead. Dashboards have been the primary weapon… Dashboards have been the primary weapon of choice for distributing data over the last few decades, but they aren’t the end of the story. 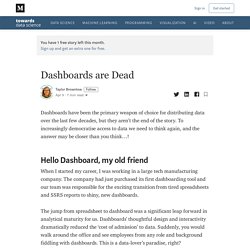 To increasingly democratise access to data we need to think again, and the answer may be closer than you think…! When I started my career, I was working in a large tech manufacturing company. The company had just purchased its first dashboarding tool and our team was responsible for the exciting transition from tired spreadsheets and SSRS reports to shiny, new dashboards.

The jump from spreadsheet to dashboard was a significant leap forward in analytical maturity for us. Dashboards’ thoughtful design and interactivity dramatically reduced the ‘cost of admission’ to data. Not quite. Bird's Eye View of Applied Machine Learning - Data Science Primer. Here’s why so many data scientists are leaving their jobs. Big data is like teenage sex: everyone talks about it, nobody really knows how to do it, everyone thinks everyone else is doing it, so everyone claims they are doing it… — Dan Ariely This quote is so apt. Many junior data scientists I know (this includes myself) wanted to get into data science because it was all about solving complex problems with cool new machine learning algorithms that make huge impact on a business. This was a chance to feel like the work we were doing was more important than anything we’ve done before. However, this is often not the case.

In my opinion, the fact that expectation does not match reality is the ultimate reason why many data scientists leave. Our dangerous addiction to prediction. In Alex Garland’s recent sci-fi TV series Devs, Silicon Valley engineers have built a quantum computer that they think proves determinism. 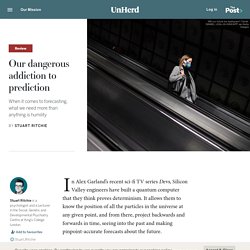 It allows them to know the position of all the particles in the universe at any given point, and from there, project backwards and forwards in time, seeing into the past and making pinpoint-accurate forecasts about the future. Garland’s protagonist, Lily Chan, isn’t impressed. “They’re having a tech nerd’s wettest dream,” she says at one point. “The one that reduces everything to nothing — nothing but code”. To them, “everything is unpackable and packable; reverse-engineerable; predictable”. It would be a spoiler to tell you how it all ends up, but Chan is hardly alone in criticising the sometimes-Messianic pronouncements of tech gurus.

That’s something of a lofty goal, but as we’ll see, the consequences of misunderstanding predictions can be far more immediate. Introduction to Artificial Intelligence (AI) What is HDFS, Map Reduce, YARN, HBase, Hive, Pig, Mongodb in Apache Hadoop Big Data. Apache Hadoop is an open source framework written in Java language. 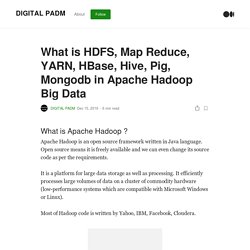 Open source means it is freely available and we can even change its source code as per the requirements. It is a platform for large data storage as well as processing. It efficiently processes large volumes of data on a cluster of commodity hardware (low-performance systems which are compatible with Microsoft Windows or Linux). Most of Hadoop code is written by Yahoo, IBM, Facebook, Cloudera.

Tutorial: Understanding Linear Regression and Regression Error Metrics. Human brains are built to recognize patterns in the world around us. For example, we observe that if we practice our programming everyday, our related skills grow. But how do we precisely describe this relationship to other people? How can we describe how strong this relationship is? Luckily, we can describe relationships between phenomena, such as practice and skill, in terms of formal mathematical estimations called regressions.

Regressions are one of the most commonly used tools in a data scientist’s kit. The quality of a regression model is how well its predictions match up against actual values, but how do we actually evaluate quality? How to Calculate Mean Absolute Error (MAE) in Excel - GIS Geography. What is Mean Absolute Error? Mean Absolute Error (MAE) measures how far predicted values are away from observed values. It’s a bit different than Root Mean Square Error (RMSE). LinkedIn's Monica Rogati On "What Is A Data Scientist?"

To continue our series on the emerging role of the data scientist in today’s data-driven organizations, we spoke with Monica Rogati, Senior Data Scientist at LinkedIn, for her views on the subject. (For other articles in this series, see the list in this problem statement on CITOResearch.com: Growing Your Own Data Scientists.) Rogati joined LinkedIn in 2008, where she has created or spearheaded many key products, including the original Talent Match system that matches jobs to candidates. Visualize a Decision Tree w/ Python + Scikit-Learn. Visualizing Decision Trees in Jupyter Notebook with Python and Graphviz. Decision Tree Regressors and Classifiers are being widely used as separate algorithms or as components for more complex models. Visualizing them is crucial in order to correctly understand how certain decisions are being made inside the algorithm, which is always important for business applications.

In this short tutorial I would like to briefly describe the process of visualizing Decision Tree models from sklearn library. Note: Graphviz installed and configured is required to run the code below. As a toy dataset I will be using a well known Iris dataset. Let’s import the main libraries and download the data for the experiment. Now we will just create a simple Decision Tree Classifier and fit it on the full dataset. Finally, the interesting steps are coming. Now, by running the following command we will convert the .dot file to .png file. After this manipulation the tree.png file will appear in the same folder. Data Science Simplified Part 12: Resampling Methods. Machine Learning - Overfitting and how to avoid it. Moodle. Last Updated on August 12, 2019. Python Variables and Assignment. 3.6. scikit-learn: machine learning in Python — Scipy lecture notes. 3.6.9.1. Hyperparameters, Over-fitting, and Under-fitting. Creating and Visualizing Decision Trees with Python.

NYC Open Data - Data scientist jobs: Where does the big data talent gap lie? For Young Female Coders, Internship Interviews Can Be Toxic. Programming Is Not Math « Sarah Mei. The Artist and the Engineer – EEJournal. How the Enlightenment Ends. From STEM to STEAM: The art of creative engineering. To secure a safer future for AI, we need the benefit of a female perspective.

Why Engineers Must Learn to Become Artists. 8 World-Class Software Companies That Use Python. Top 5 problems with big data - and how to solve them. Invisible Women by Caroline Criado Perez – a world designed for men. What makes an algorithm feminist, and why we need them to be. Working with Jupyter code cells in the Python Interactive window. Linear regression analysis in Excel. 7 public data sets you can analyse for free right now. Python Pandas Tutorial: A Complete Introduction for Beginners – LearnDataSci. 6 Amazing Data Science Applications - Don't Forget to Check the 5th One! A Complete Tutorial to Learn Python for Data Science from Scratch.