Red Menace (2nd Edition) Red Menace is a solitaire wargame pitting the strategic nuclear and defensive forces of the United States, Canada, and the United Kingdom against those of the Soviet Union and its client state, Cuba, in 1959. 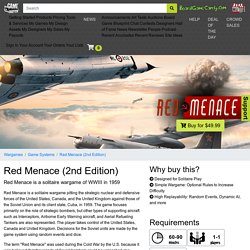 The game focuses primarily on the role of strategic bombers, but other types of supporting aircraft such as Interceptors, Airborne Early Warning aircraft, and Aerial Refueling Tankers are also represented. The player takes control of the United States, Canada and United Kingdom. Decisions for the Soviet units are made by the game system using random events and dice. The term "Red Menace" was used during the Cold War by the U.S. because it was believed that thousands of Soviet bombers could be unleashed at a moment's notice.

This turned out not to be true (the Soviets had several hundred bombers at best, and many had significant range limitations). Battlespace Games. Red Menace 2nd EditionA Game Designed by R. 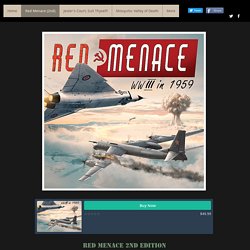 Brent Ward Red Menace is a solitaire wargame pitting the strategic nuclear and defensive forces of the United States, Canada, and the United Kingdom against those of the Soviet Union and its client state, Cuba, in 1959. The game focuses primarily on the role of strategic bombers, but other types of supporting aircraft such as Interceptors, Airborne Early Warning, and Aerial Refueling Tankers are also represented. Wargamedownloads.com. Wargaming DropZone. Wargaming DropZone. Historical War Gaming. About Memoir ’44 Memoir ’44 is such a good game, it’s the reason this site exists! 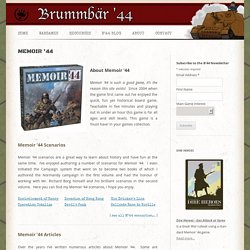 Since 2004 when the game first came out I’ve enjoyed the quick, fun yet historical board game. Teachable in five minutes and playing out in under an hour this game is for all ages and skill levels. This game is a ‘must have’ in your games collection. Memoir ’44 Scenarios Memoir ’44 scenarios are a great way to learn about history and have fun at the same time. Memoir ’44 Articles Over the years I’ve written numerous articles about Memoir ’44. Thank you! This will help us improve your ad experience. Report a problem This item is... Brummbär '44 for Memoir '44 » Brummbar '44. With the release of the Breakthrough maps from Day of Wonder, players now have access to the maps that before were only available with the Campaign Bag. 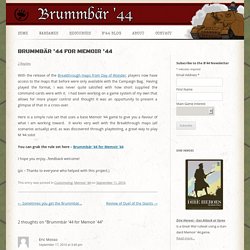 Having played the format, I was never quite satisfied with how short supplied the command cards were with it. I had been working on a game system of my own that allows for more player control and thought it was an opportunity to present a glimpse of that in a cross-over. Here is a simple rule set that uses a base Memoir ’44 game to give you a flavour of what I am working toward. It works very well with the Breakthrough maps (all scenarios actually) and, as was discovered through playtesting, a great way to play M ’44 solo! You can grab the rule set here – Brummbär ’44 for Memoir ’44 I hope you enjoy…feedback welcome! (ps – Thanks to everyone who helped with this project.) Advice for Designers and Publishers: How to Submit Listings for Games, People and Publishers to the BGG Database. Some of the articles in this series will be relevant to designers and publishers whether or not they're active on BGG, such as the introductory article on how to write a press release; other articles, however, will pertain solely to the ins-and-outs of BGG, but a side benefit of such omphaloskepsic posts is that they should also be useful to BGG users at large, such as today's article about how to submit items to the BGG database. 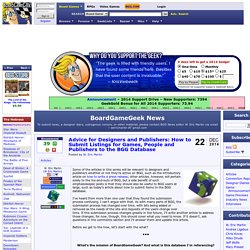 I've heard from more than one user that they found the submission process confusing. I can't argue with that. As with many parts of BGG, the submission process has changed over time, with bits being added or removed as the needs of the site and requests of the users change over time. If this submission process changes greatly in the future, I'll write another article to address those changes; for now, though, this should cover what you need to know. If it doesn't, ask questions in the comments section and I'll answer them and update this article.