The World According to Zorin Greystar. I have heard lore of strange worlds where adventurers gain experience in finding gold and magic...Zorin Greystar has told me of these places, and of the Masters who control the fates of those who venture there. 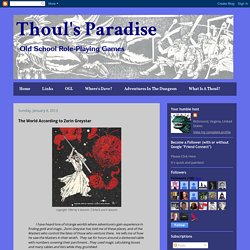 He tells me of how he saw the Masters in their wrath. They sat for hours around a darkened table with numbers covering their parchment...They used magic calculating boxes and many tables and lists while they grumbled. –Toran, Lord of the Dragonsback Mountains In 1984, a pair of young men published a 120+ page compilation of their AD&D house rules titled The Complete Works of Zorin Greystar - Book One, “a revolutionary new supplement for expert players and game masters.” My Shipyard. General Notes If you play SFB long enough, you will inevitably come up with ideas for new ships or improved versions of existing ships. 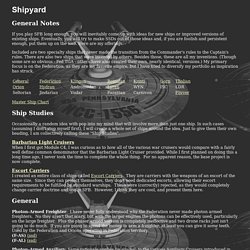 Eventually, you will try to make SSDs out of those ideas and, if you are foolish and persistent enough, put them up on the web. Here are my offerings. Included are two specialty ships that never made the transition from the Commander's rules to the Captain's rules. There are also two ships that were invented by others. Besides those, these are all my inventions. In Y173 of an alternate history, Star Fleet realized that the existing plans for a "battlecruiser" (the BCG and BCF designs) would soon be outstripped by more advanced designs. E. Chris Garrison. The Compendium of Free Tabletop Role Playing Games This is a collection of games, and links to games, that I’ve collected since 1993. 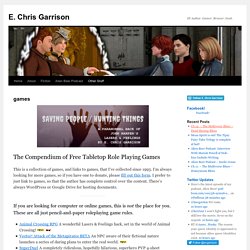 I’m always looking for more games, so if you have one to donate, please fill out this form. I prefer to just link to games, so that the author has complete control over the content. OGC. Core Rulebook PDF – ODAM Publishing. Maps of Nuclear Reactors = Gamma World Mega Dungeons! Oh yeah baby! 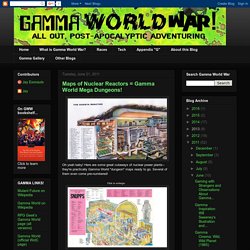 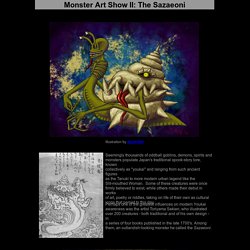 Some of these creatures were once firmly believed to exist, while others made their debut in works of art, poetry or riddles, taking on life of their own as cultural icons that persist to this day. Perhaps one of the greatest influences on modern Youkai awareness was the artist Toriyama Sekien, who illustrated over 200 creatures - both traditional and of his own design - in a series of four books published in the late 1700's. 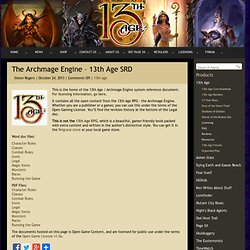 For licensing information, go here. It contains all the open content from the 13th Age RPG – the Archmage Engine. Whether you are a publisher or a gamer, you can use this under the terms of the Open Gaming License. You’ll find the revision history at the bottom of the Legal doc. This is not the 13th Age RPG, which is a beautiful, gamer-friendly book packed with extra content and written in the author’s distinctive style. Word doc files: Character RulesClassesCombat RulesIconsLegalMagic ItemsMonstersRacesRunning the Game PDF Files:Character RulesClassesCombat RulesIconsLegalMagic ItemsMonstersRacesRunning the Game. 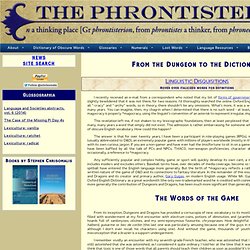 I was slightly bewildered that it was not there, for two reasons. I'd thoroughly searched the online Oxford English Dictionary and other sources for all "-cracy" and "-archy" words, so in theory, there shouldn't be any omissions. This revelation left me, if not shaken to my lexicographic foundations, then at least perplexed that I had possessed in my vocabulary for many, many years a word that simply did not exist. The answer is that for over twenty years, I have been a participant in role-playing games (RPGs), most notably Dungeons and Dragons (usually abbreviated to D&D), an extremely popular game with millions of players worldwide (mostly in their teens and twenties), and also one with its own curious jargon. Magic-user The Words of the Game. Inkwell Ideas. Role playing game tools and articles. AnyDice. Role Play Media Network - a community for rpg bloggers, podcasters, vidcasters, and their audiences. Roleplaying Games & More.