South East London Community SDA Church. At the turn of the twentieth century, people lived with the idea that humanity was improving, that morality would increase, and that science and technology would help usher in a utopia. 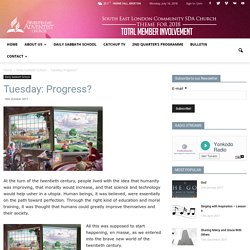 Human beings, it was believed, were essentially on the path toward perfection. Through the right kind of education and moral training, it was thought that humans could greatly improve themselves and their society. Image © Review and Herald Publishing Assn. Goodsalt.com All this was supposed to start happening, en masse, as we entered into the brave new world of the twentieth century. Unfortunately, things didn’t quite turn out that way, did they? What was the problem? Read Romans 1:22-32. How the Victorians invented the future for us. Before the beginning of the 19th century, the future was only rarely portrayed as a very different place from the present. 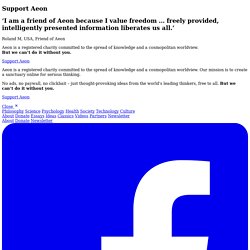 The social order, like the natural order, was supposed to be static, with everything in its proper place: as it had been, so it would be. Fox Home: Visions of Science: Books and Readers at he Dawn of the Victorian Age by James Secord. - The Washington Post. Games.avclub. The Creation of Adam. The Creation of Adam (Italian: Creazione di Adamo) is a fresco painting by Michelangelo, which forms part of the Sistine Chapel's ceiling, painted c. 1508–1512. 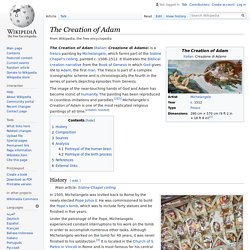 It illustrates the Biblical creation narrative from the Book of Genesis in which God gives life to Adam, the first man. The fresco is part of a complex iconographic scheme and is chronologically the fourth in the series of panels depicting episodes from Genesis. The image of the near-touching hands of God and Adam has become iconic of humanity. The painting has been reproduced in countless imitations and parodies.[2][3] Michelangelo's Creation of Adam is one of the most replicated religious paintings of all time.

[citation needed] History[edit] The Creation Of Adam Painting by Michelangelo. Brief History of the Greek Myths. The Greek myths, in their unknown beginnings, are believed to have been acquired and transmitted by oral tradition. 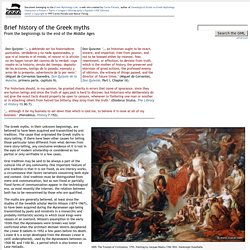 The cause that originated the Greek myths is story-telling. If there have been other causes for telling those particular tales different from what derives from mere story-telling, any conclusive evidence of it is lost in the eyes of modern scholarship or considered as too partial or only verifiable in a few cases. Oral tradition may be said to be always a part of the cultural life of any community.

One important feature of oral tradition is that it is not fixed, as are literary works, a circumstance that favors variations concerning both style and content. The Art of Genetic Manipulation. By Arius Elvikis The Farm by Alexis Rockman (2000) Incredible advances are being made in genetics and biotechnology. 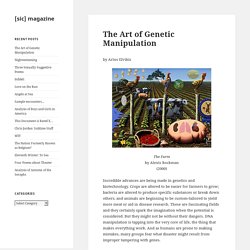 Crops are altered to be easier for farmers to grow; bacteria are altered to produce specific substances or break down others; and animals are beginning to be custom-tailored to yield more meat or aid in disease research. These are fascinating fields and they certainly spark the imagination when the potential is considered. But they might not be without their dangers. Artists often serve as cultural educators and societal watchdogs. « La série de peintures sur les droits génétiques » par Mariam Muradian. From the Genetic Bill of Rights Painting Series by Mariam Muradian & CC Arshagra.The Genetic Bill of Rights was drafted in 2000 by The Council for Responsible Genetics and GeneWatch, yet most people do not even now that it exists. 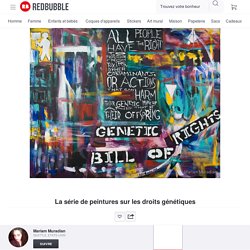 These rights exist for everyone; to inform people that they have the right to govern their own genes, bodies, cultures, and biodiversity.Copyright 2000. All rights reserved The Council for Responsible Genetics.Professional photographs of the paintings by Kevin Sharp.Acrylics, oil pastel, charcoal on 24″×30″ canvas. Google Image Result for. Alexis Rockman: Genetics and Culture. The Farm (detail), 2000 oil on board (see text below) - note the role of scientific collaboration/concepts Sara Rosenbaum - interviewer Alexis Rockman is a painter who works on a very large scale. 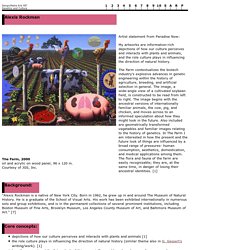 We are discussing one painting, The Farm, which includes plants and animals, past, present and future. Note: all bold text is [emphasis added] for teaching purposes. Alexis Rockman. American painter Alexis Rockman (born 1962) is an American contemporary artist known for his paintings that provide rich depictions of future landscapes as they might exist with impacts of climate change and evolution influenced by genetic engineering.[2][3] He has exhibited his work in the United States since 1985, including a 2004 exhibition at the Brooklyn Museum, and internationally since 1989.[4] Alexis Rockman lives in New York City, and works out of a studio in the city's TriBeCa neighborhood.[5] Life[edit] Rockman was born and grew up in New York City.[2][6] Rockman's stepfather, an Australian jazz musician, brought the family to Australia frequently.[7] As a child, Rockman frequented the American Museum of Natural History in New York City, where his mother, Diana Wall, worked for anthropologist Margaret Mead.[5][7][8] Rockman has a particular fascination with cockroaches and rats, and admires their ability to shadow human civilization.[9] 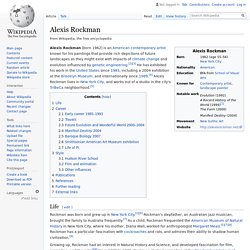