Concrete: the most destructive material on Earth 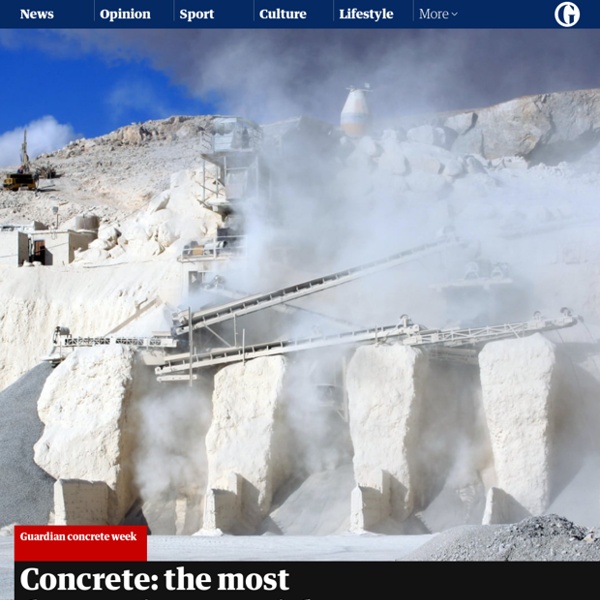 In the time it takes you to read this sentence, the global building industry will have poured more than 19,000 bathtubs of concrete. By the time you are halfway through this article, the volume would fill the Albert Hall and spill out into Hyde Park. In a day it would be almost the size of China’s Three Gorges Dam. In a single year, there is enough to patio over every hill, dale, nook and cranny in England. After water, concrete is the most widely used substance on Earth. If the cement industry were a country, it would be the third largest carbon dioxide emitter in the world with up to 2.8bn tonnes, surpassed only by China and the US. The material is the foundation of modern development, putting roofs over the heads of billions, fortifying our defences against natural disaster and providing a structure for healthcare, education, transport, energy and industry. Concrete is how we try to tame nature. Our blue and green world is becoming greyer by the second. The dangers are recognised.

How climate change is behind this week's extreme cold snap Baby, it's frigid outside. A large swath of Canada, from the Prairies to Nova Scotia, is under a deep freeze. Temperatures in Winnipeg are dipping down to –36 C Monday night with a windchill of almost –50 C. In Windsor, which is typically the warmest spot in Ontario, the overnight temperature will dip to –27 C with a windchill of –40 C. Even in parts of the U.S.

From MIT Press: 10 Topics Every 21st Century Citizen Should Know About “That’s it: I need to know what I need to know!” I exclaimed recently when I heard about the “Essential Knowledge” series published by MIT Press. Know what I mean? The 21st century’s constant rapid change — particularly in technology — can engender a festering fear of missing out, the sense that everyone else is riding some trending wave while you’re standing with your back to it not even aware it’s there. And call me naive but there's no arbiter of need-to-know modern knowledge I'd rather consult than the bastion of brilliance that is MIT.

A belief in meritocracy is not only false: it’s bad for you ‘We are true to our creed when a little girl born into the bleakest poverty knows that she has the same chance to succeed as anybody else …’ Barack Obama, inaugural address, 2013 ‘We must create a level playing field for American companies and workers.’ Donald Trump, inaugural address, 2017 Meritocracy has become a leading social ideal. Politicians across the ideological spectrum continually return to the theme that the rewards of life – money, power, jobs, university admission – should be distributed according to skill and effort. The most common metaphor is the ‘even playing field’ upon which players can rise to the position that fits their merit. Artistic Expressions and Copyright: The theory and practice of remix culture Finally, we should be wary of making assumptions about what is happening to culture as it operates under digital regimes of production. It is not enough to say that the avant garde no longer exists, that art is dead or that we are all authors now. I believe we should consider the words of Jörgen Schäffer and Peter Gendolla who wrote recently in Reading (in) the Net and Literature

the shock of the anthropocene In 2003 the Australian philosopher Glenn Albrecht coined the term solastalgia to mean a “form of psychic or existential distress caused by environmental change”. Albrecht was studying the effects of long-term drought and large-scale mining activity on communities in New South Wales, when he realised that no word existed to describe the unhappiness of people whose landscapes were being transformed about them by forces beyond their control. He proposed his new term to describe this distinctive kind of homesickness. Where the pain of nostalgia arises from moving away, the pain of solastalgia arises from staying put. Where the pain of nostalgia can be mitigated by return, the pain of solastalgia tends to be irreversible.

The Problem With Reinforced Concrete By itself, concrete is a very durable construction material. The magnificent Pantheon in Rome, the world’s largest unreinforced concrete dome, is in excellent condition after nearly 1,900 years. And yet many concrete structures from last century – bridges, highways and buildings – are crumbling. Many concrete structures built this century will be obsolete before its end. The Commons as a Tool for Sharing the Wealth - Commons Strategies David Bollier I recently spoke at a conference, “Property and Inequality in the 21st Century,” hosted by The Common Core of European Private Law, an annual gathering of legal scholars, mostly from Europe. They had asked me how the commons might be a force for reducing inequality. Below are my remarks, “The Commons as a Tool for Sharing the Wealth.” The conference was held at the University of Göteborg, Sweden, on June 12-13, 2015. Thank you for inviting me to speak today about the relationship between property law and inequality – a topic that receives far too little attention.

Inhabitat - Green Design, Innovation, Architecture, Green Building Concrete is a material that quite literally holds our cities together. From homes and apartment buildings to bridges, viaducts, and sidewalks, this ubiquitous gray material's importance to modern urban life is undeniable. But you might have heard that it also has a dirty secret: the production of commercial concrete materials releases tons of the greenhouse gas carbon dioxide (CO2) into the atmosphere each year, contributing to the calamity that is climate change. But it doesn't have to be that way.

Understanding Reductionist vs. Holistic Thinking Reductionist thinking rules the world. Without it, technology and the progress that comes with it would not have occurred and we would have very little in the way of sciences. The modern world as we know it would not exist without the technical marvels that come from putting pieces together in novel ways to create often spectacular new inventions, many of which change our lives in profound ways. Reductionist thinking works perfectly for this: Which is made from this: A car is a very complex thing, but you can break it down to its individual parts and understand them in detail.

A New Economic System for a World in Rapid Disintegration (Photo: Antoine Collet; Edited: LW / TO) We live in ominously dangerous times. The world capitalist system -- having fueled colonialism, imperialism and the constant intensification of labor power exploitation for roughly 500 years -- now threatens the planet with an ecological collapse of unprecedented proportions. Unsustainable resource exploitation, water pollution (the transformation of lakes, rivers and oceans into garbage dumps) and massive economic inequality are at the root of the possibly irreversible collapse of industrial civilization. Meanwhile, however, too many of us remain caught up in abstract and ahistorical predictions of collapse that fail to offer an alternative realistic vision of a future socio-economic order.