Being Busy Is Eliminating the Joys of Shared Free Time. Still, Perlow and Boston Consulting Group deemed PTO a success, and it has since been adopted elsewhere. 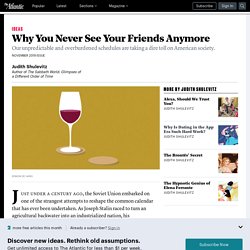 Drill down on why, though, and the answer does more to confirm the problem than suggest a solution. PTO made people meet more frequently and talk frankly to one another. They had to explain why a particular night wouldn’t work for them. They bonded. It was the together time, not the nights off, that made employees happier and more effective. The “opt out” movement comes at the problem from a different angle. And for those on the lower rungs of the economy, there’s no ignoring the scheduling algorithm—at least as long as the algorithm is king.

The Gap, IKEA, and a handful of other retailers have been trying to figure out how to mitigate the damage of inconsistent shifts. But it’s naive to think that policies like this will become the norm. 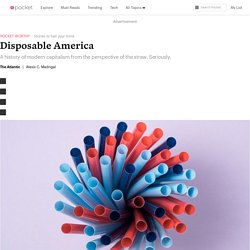 A straw is a simple thing. It’s a tube, a conveyance mechanism for liquid. The defining characteristic of the straw is the emptiness inside it. This is the stuff of tragedy, and America. Over the last several months, plastic straws have come under fire from environmental activists who rightly point out that disposable plastics have created a swirling, centuries-long ecological disaster that is brutally difficult to clean up. All this to say: The straw is officially part of the culture wars, and you might be thinking, “Gah, these contentious times we live in!” In San Francisco, Tech Money Doesn’t Buy Happiness. Are you a robot? GM's layoffs can be traced to its quest to turn people into machines. When General Motors announced last month that it was shutting down small-car production and mothballing its Lordstown Assembly plant outside of Youngstown, in northeast Ohio, ­the news felt inevitable. 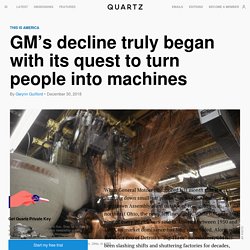 While GM once built nine of every 20 new cars sold in America between 1950 and 1980, its market dominance has long since faded. Along with the other two of Detroit’s “Big Three” automakers, GM has been slashing shifts and shuttering factories for decades, gutting cities like Youngstown across America. But nothing that led to the layoff of Lordstown’s 1,500 workers was inevitable—not GM’s failure, not the triumph of foreign small cars, and not even the withering of Detroit’s industrial might—provided you know where to look. Nearly a half-century ago, as the first gusts of global competition began buffeting the US economy, an iconic strike in Lordstown presented GM with an alternative path—and incited the rest of America to rethink our relationship to work.

The factory of the future AP Photo. Can American capitalism survive? Steven Pearlstein on the perils of neoliberalism. A decade ago, 80 percent of Americans believed that a free market economy was the best economic system. 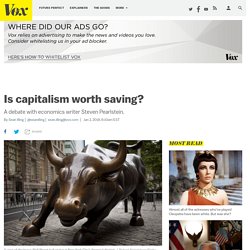 Today, that number is 60 percent. Another recent poll shows that only 42 percent of millennials support capitalism. So what happened? Why have so many people, both in the US and abroad, lost faith in capitalism? Steven Pearlstein, a columnist for the Washington Post and public affairs professor at George Mason University, has a few answers. Pearlstein’s new book, Can American Capitalism Survive? The debate: is America’s future capitalist or socialist? As 2018 drew to a close, Steve Pearlstein, the Washington Post’s Pulitzer Prize-winning business columnist, published a book that would’ve been bizarre only a few years before. 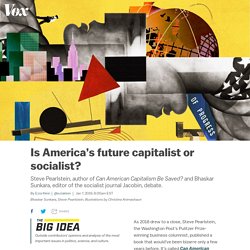 It’s called Can American Capitalism Survive? And it begins by laying bare the ideological crisis facing the economic system and, just as importantly, the economic philosophy that many Americans take for granted: A decade ago, 80 percent of Americans agreed with the statement that a free market economy is the best system. Today, it is 60 percent, lower than in China. One recent poll found that only 42 percent of millennials supported capitalism. Transit?redirect_uri= Losing Lordstown - Belt Magazine. A Business With No End.

Part I: Zooming Out Recently, one of my students at Stanford told me a strange story. 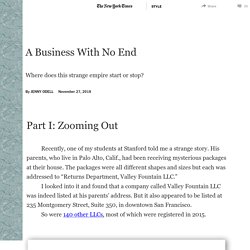 His parents, who live in Palo Alto, Calif., had been receiving mysterious packages at their house. The packages were all different shapes and sizes but each was addressed to “Returns Department, Valley Fountain LLC.” I looked into it and found that a company called Valley Fountain LLC was indeed listed at his parents’ address. But it also appeared to be listed at 235 Montgomery Street, Suite 350, in downtown San Francisco. So were 140 other LLCs, most of which were registered in 2015. The names of many of these other companies were baffling and surreal. There was little pattern or theme to what these Amazon shops sold. One thing these LLCs had in common was that their registered agent was named Jonathan Park. A seemingly random assortment of items for sale on an Amazon storefront called Sendai Bookstore They were also strangely expensive.

I decided to order something: L.A. Trump’s Tax Cut Was Supposed to Change Corporate Behavior. Here’s What Happened. Only 28% of Americans are financially healthy. - The Washington Post.