The Four Desires Driving All Human Behavior. To Get People to Change, Make Change Easy. Photo by: Peter Dazeley/Getty Images It is 9:00AM in our New York City office, and one of us (Jordan) stops by the fifth-floor kitchen to pick up a free piece of fruit — a healthy perk that Weight Watchers offers its employees. 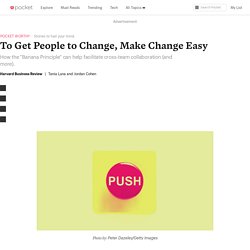 When he arrives, he faces a familiar sight: the bananas are already gone and only the oranges remain. When other hopefuls approach and find the bananas missing, they do not take a free orange. They just walk away. What is wrong with these people? The Case for Professors of Stupidity - Nautilus - Pocket. Why You Can’t Break Your Bad Habits - Darius Foroux - Pocket. Why You Feel the Urge to Jump - Nautilus - Pocket. Photo by Michael H / Getty Images Have you ever stood in a high place and felt the urge to jump? 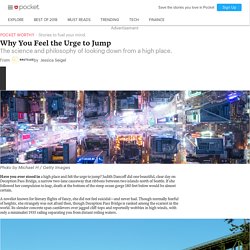 Judith Dancoff did one beautiful, clear day on Deception Pass Bridge, a narrow two-lane causeway that ribbons between two islands north of Seattle. If she followed her compulsion to leap, death at the bottom of the steep ocean gorge 180 feet below would be almost certain. A novelist known for literary flights of fancy, she did not feel suicidal—and never had. Though normally fearful of heights, she strangely was not afraid then, though Deception Pass Bridge is ranked among the scariest in the world. Temptation: Deception Pass Bridge rises 180 feet above the ocean. Stop Trying to Change Yourself - Mark Manson - Pocket.

Why willpower is overrated - Vox - Pocket. Photo by: Getty Creative Images People with a lot of self-control — people who, when they happen upon a delicious food they don’t think they should eat, seemingly grin and bear the temptation until it passes — have it easy. 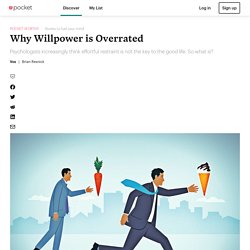 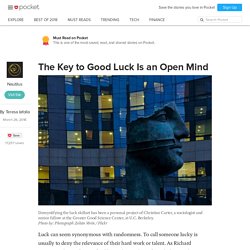 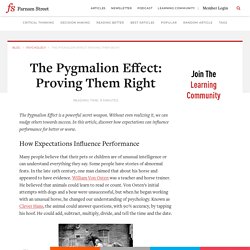 Without even realizing it, we can nudge others towards success. In this article, discover how expectations can influence performance for better or worse. How Expectations Influence Performance Many people believe that their pets or children are of unusual intelligence or can understand everything they say. Some people have stories of abnormal feats. Before You Can Be With Others, First Learn to Be Alone - aeon - Pocket. In 1840, Edgar Allan Poe described the ‘mad energy’ of an ageing man who roved the streets of London from dusk till dawn. 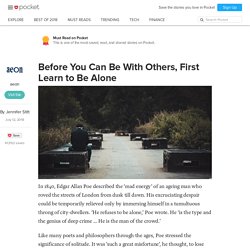 His excruciating despair could be temporarily relieved only by immersing himself in a tumultuous throng of city-dwellers. ‘He refuses to be alone,’ Poe wrote. He ‘is the type and the genius of deep crime … He is the man of the crowd.’ Why You Can't Break Your Bad Habits. I’ve tried many different ways to break my bad habits. 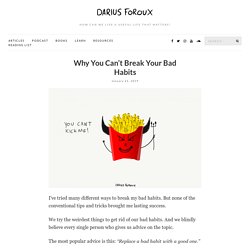 But none of the conventional tips and tricks brought me lasting success. We try the weirdest things to get rid of our bad habits. And we blindly believe every single person who gives us advice on the topic. Before You Can Be With Others, First Learn to Be Alone - aeon - Pocket. Why you can't be productive without routines and rituals. Charles Duhigg: Why Is America So Angry? I. 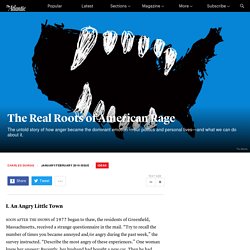 An Angry Little Town Soon after the snows of 1977 began to thaw, the residents of Greenfield, Massachusetts, received a strange questionnaire in the mail. “Try to recall the number of times you became annoyed and/or angry during the past week,” the survey instructed. “Describe the most angry of these experiences.” One woman knew her answer: Recently, her husband had bought a new car. To hear more feature stories, see our full list or get the Audm iPhone app. The survey was interested in the particulars of respondents’ anger. Research: When Overconfidence Is an Asset, and When It’s a Liability. Executive Summary What happens to people who are overconfident? 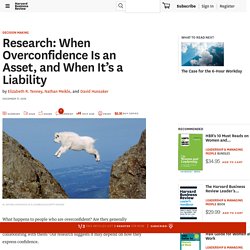 Are they generally rewarded, promoted, and respected? Or do we distrust them and avoid collaborating with them? Our research suggests it may depend on how they express confidence. There's a simple reason why the Amazon Echo costs so little. Smartphones apps, social media, and smart devices dominate our attention. 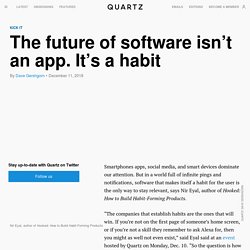 But in a world full of infinite pings and notifications, software that makes itself a habit for the user is the only way to stay relevant, says Nir Eyal, author of Hooked: How to Build Habit-Forming Products. “The companies that establish habits are the ones that will win. If you’re not on the first page of someone’s home screen, or if you’re not a skill they remember to ask Alexa for, then you might as well not even exist,” said Eyal said at an event hosted by Quartz on Monday, Dec. 10.

Charles Duhigg: Why Is America So Angry? How to Emotionally Detach From Criticism. How to Emotionally Detach From Criticism. Why Men Can’t Stand to Be Alone After a Breakup or a Divorce — First Person. Travel - Japan’s unusual way to view the world. Travel - Why the French don’t show excitement. When I was 19 years old, after five years of back-and-forth trips that grew longer each time, I finally relocated officially from the United States to France.

Already armed with a fairly good grasp of the language, I was convinced that I would soon assimilate into French culture. Why Your Health Is the Key to Your Success in Business. Take care of yourself, and your business will take care of itself. Taming the Mammoth: Why You Should Stop Caring What Other People Think - Wait But Why - Pocket. 5 Ways Smart People Sabotage Their Success. Executive Summary. How to Break Bad Habits (And Why That's More Important Than You Think) Secrets of people who stay happy in the worst circumstances.

Bad things happen both personally and professionally. How to Be a More Patient Person. Is Chronic Anxiety a Learning Disorder? To Have Freedom In Your Life, You Must Stop Avoiding This One Thing. Searching for a diagnosis: how scientists are untangling the mystery of developmental disorders. Study: people tend to cluster into four distinct personality “types” People love taking online quizzes; just ask Buzzfeed and Facebook. A new study has sifted through some of the largest online data sets of personality quizzes and identified four distinct "types" therein. The new methodology used for this study—described in detail in a new paper in Nature Human Behavior—is rigorous and replicable, which could help move personality typing analysis out of the dubious self-help section in your local bookstore and into serious scientific journals.

The Trick To Thinking Clearer and Better – Personal Growth. The late historians Will and Ariel Durant spent four decades of their life studying, compiling, and writing the history of Western civilization. The product of their efforts, The Story of Civilization, went on to fill four million words, across 10,000 pages, divided into 11 separate books. People Like You More Than You Know. Our inner narrator gives us continuity and a sense of self. Walter Mischel, the marshmallow test founder, had great tips on self-control.

Scientists Say They've Found The Driver of False Beliefs, And It's Not a Lack of Intelligence. The Tyranny of Personality Testing. What Personality Tests Really Deliver. Why work is exhausting even when it involves no physical labor. The BE Hub.