The virtues of hands-off leadership — Quartz at Work. When I first took on the role of president and CEO at Red Hat, I was shocked by what appeared to be chaos in how the organization operated: Associates had debates with their managers. 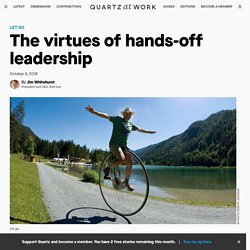 Meetings involved extremely heated and passionate discussions. There was an occasional tear. I thought, “They brought me in here to clean this place up.” Soon, however, I learned that what I’d first interpreted as chaos was actually a unique organizational culture—and one that could be quite effective. I’d been trained to be a detail-oriented, order-driven person who focuses on the hard numbers. Those first months, I felt a bit like an anthropologist who had stumbled on a new world and I had to resist the urge to insert myself.

Looking back 10 years later, I’m so glad I did. The World's 10 Top CEOs (They Lead in a Totally Unique Way) Over the last three decades, servant leadership has risen from a noble and ethical leadership ideology stuck in religious worldviews to the very principles of how the most successful companies on the planet operate and profit. 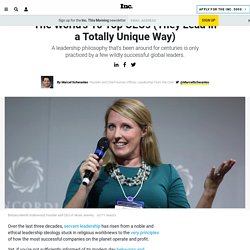 Yet, if you're not sufficiently informed of its modern day behaviors and practices as espoused by leading authors, thought-leaders, and scholars, a false perception may lead you astray. Typically, what you think servant leadership is...is usually the opposite of what it truly is. Take a cue from the world's top brands. They have grasped the immense power that is generated from putting people (employees) ahead of profits through shared values like authenticity, intrapreneurship, freedom and ownership, community, and collaboration. And servant leaders, naturally, have leveraged this emotional currency as the only sustainable model for the future of work. The Chosen 10 Metayer is the sole non-American executive on this list. No. 9: David K. Volume 90% How Humble Leadership Really Works.

Top-down leadership is outdated and counterproductive. By focusing too much on control and end goals, and not enough on their people, leaders are making it more difficult to achieve their own desired outcomes. The key, then, is to help people feel... When you’re a leader — no matter how long you’ve been in your role or how hard the journey was to get there — you are merely overhead unless you’re bringing out the best in your employees. Unfortunately, many leaders lose sight of this. Power, as my colleague Ena Inesi has studied, can cause leaders to become overly obsessed with outcomes and control, and, therefore, treat their employees as means to an end.

4 Principles of Servant Leadership. A simple path to bettering both your company and the world it inhabits. 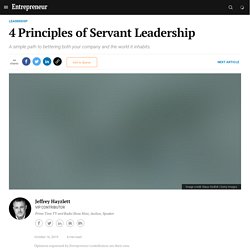 October 16, 2019 6 min read Opinions expressed by Entrepreneur contributors are their own. Like pretty much everything nowadays, the concept of leadership has morphed and evolved into something our parents or grandparents would not recognize. A few decades ago, things seemed simpler. Being the boss automatically made you a leader in the eyes of employees. With all of the tools we have today, there’s no excuse not to be a better leader. How Humble Leadership Really Works. Executive Summary Top-down leadership is outdated and counterproductive. 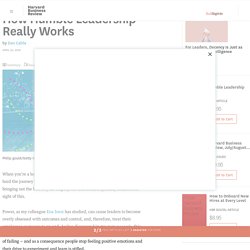 By focusing too much on control and end goals, and not enough on their people, leaders are making it more difficult to achieve their own desired outcomes. The key, then, is to help people feel purposeful, motivated, and energized so they can bring their best selves to work. One of the best ways is to adopt the humble mind-set of a servant leader. Servant Leadership: Who Is Ultimately Responsible For Your People's Success? Three Powerful Conversations Managers Must Have To Develop Their People. The fog of war envelops every battlefield. 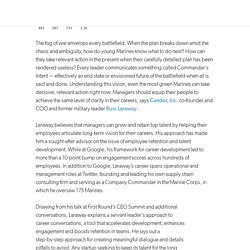 When the plan breaks down amid the chaos and ambiguity, how do young Marines know what to do next? How can they take relevant action in the present when their carefully detailed plan has been rendered useless? Every leader communicates something called Commander’s Intent — effectively an end state or envisioned future of the battlefield when all is said and done. Understanding this vision, even the most green Marines can take decisive, relevant action right now. Managers should equip their people to achieve the same level of clarity in their careers, says Candor, Inc. co-founder and COO and former military leader Russ Laraway. 10 Things Leaders Should Never Do. 7 Qualities Servant-Leaders Expect From Others. 7 Qualities Servant-Leaders Expect From Others Servant-leaders fail when they tolerate self-serving in others. 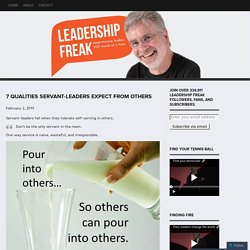 Don’t be the only servant in the room. One-way service is naive, wasteful, and irresponsible. The ultimate goal of servant-leadership isn’t serving for the sake of serving it’s growing servant-leaders. Serve others so others will serve others. It’s foolish to serve those who enjoy being served but hate serving others. I’m Not a Servant - I’m a Host! A New Metaphor for Leadership in Agile? What does it mean being a leader? 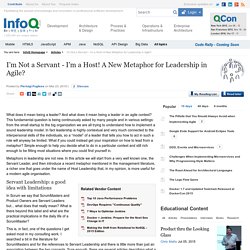 And what does it mean being a leader in an agile context? This fundamental question is being continuously asked by many people and in various settings: from the small startup to the big organization we are all trying to understand how to implement a sound leadership model. In fact leadership is highly contextual and very much connected to the interpersonal skills of the individuals, so a “model” of a leader that tells you how to act in such a role will anyway be limited. 8 Qualities That Make Great Bosses Unforgettable. Google-isn-8217-t-looking-for-stanford-and-mit-grads-it-8217-s-looking-for-this-

The prototypical Silicon Valley star is perceived as a genius from Stanford, MIT, or Harvard who's technically brilliant, inspires with vision, and carries the day. Servant Leadership. Takeuchi and Nonaka have written an article on Leadership in the Harvard Business Review. 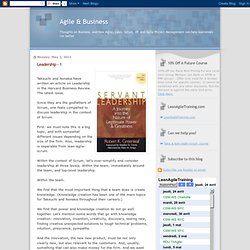 The latest issue. Since they are the godfathers of Scrum, one feels compelled to discuss leadership in the context of Scrum. First. we must note this is a big topic, and with somewhat different issues depending on the size of the firm.