The Trick To Thinking Clearer and Better – Personal Growth 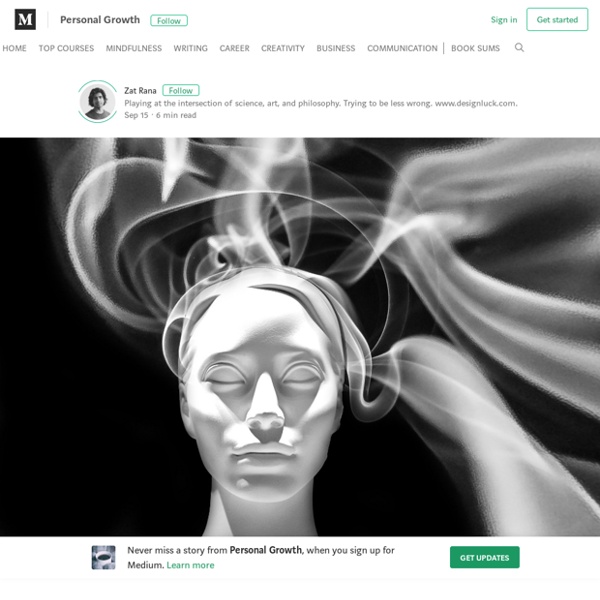 The late historians Will and Ariel Durant spent four decades of their life studying, compiling, and writing the history of Western civilization. The product of their efforts, The Story of Civilization, went on to fill four million words, across 10,000 pages, divided into 11 separate books. After finishing the last one, they then took on an arguably more daunting task: to summarize all they had learned into a 100 pages in The Lessons of History. It’s an incomplete and generalizing attempt, no doubt, but it is also one of the most densely-packed sources of modern wisdom available to us. There are many trends and patterns to be found in the past, and the Durants do a commendable job of highlighting them. The essence of their view, however, can be summarized by the following sentence from their short book: How we think affects everything from our ability to solve problems to how we understand meaning and value and purpose. A Mind That Is Stuck in Habit Loops Diversifying Your Thinking Patterns

Study: Religious fundamentalists and dogmatic individuals are more likely to believe fake news New research provides evidence that delusion-prone individuals, dogmatic individuals, and religious fundamentalists are more likely to believe fake news. The study, which appears in the Journal of Applied Research in Memory and Cognition, suggests that the inability to detect false information is related to a failure to be actively open-minded. The rise of online social media has led to growing concerns about the spread of unsubstantiated rumors, misleading political propaganda, and blatantly false articles designed to create viral web traffic.

Reasoning Resources While people generally think of an argument as a fight, perhaps involving the hurling of small appliances, this is not the case-at least as the term is used in philosophy. In philosophy, an argument is a set of claims, one of which is supposed to be supported by the others. There are two types of claims in an argument.

Top 10 Thinking Traps Exposed Our minds set up many traps for us. Unless we’re aware of them, these traps can seriously hinder our ability to think rationally, leading us to bad reasoning and making stupid decisions. Features of our minds that are meant to help us may, eventually, get us into trouble. Critical Thinking Model 1 To Analyze Thinking We Must Identify and Question its Elemental Structures Standard: Clarityunderstandable, the meaning can be grasped Could you elaborate further? Could you give me an example? Three Type of Arrogance Explanations > Relationships > Three Type of Arrogance Belief arrogance | Crowing arrogance | Perceived arrogance | So what? Arrogance can be viewed as appearing in three forms: belief, crowing and perceived, each of which is quite different. Belief arrogance

Evaluating Internet Research Sources Robert Harris Version Date: October 11, 2018 Previous: August 16, 2018, December 12, 2016; January 21, 2015, December 27, 2013; November 6, 2013; Nov. 22, 2010 and June 15, 2007 "The central work of life is interpretation." --Proverb Introduction: The Diversity of Information Adopting a Skeptical (or Cautious) Attitude Mandela Effect Introduction – Debunking Mandela Effects The Mandela Effect is a term for where a group of people all mis-remember the same detail, event or physicality. It is named after the instance in which a large group of people all shared the same memory that Nelson Mandela died prior to his actual 2013 death, usually some time in the 1980’s. The effect exploded in popularity on the internet when a peculiar example popped up where a majority of people seemed to have recalled the Berenstain Bears books as being spelled as “Berenstein” or some other variation, differing from the actual spelling. The effect is somewhat different from a false memory as it effects large groups of people, seemingly without many connections and without the same emotional factors present. It also seems stronger and harder to escape the feeling that it’s simply a mis-remembering of a detail, which is why people are so adamant with claims of their memories. As such, it’s often been hinted at that the Mandela Effect is closely related to cognitive dissonance.

Know Your Sources When doing research you will come across a lot of information from different types of sources. How do you decide which source to use? From tweets to newspaper articles, this tool provides a brief description of each and breaks down 6 factors of what to consider when selecting a source. A platform for millions of very short messages on a variety of topics that enables brief dialogue between distinct groups of people across geographic, political, cultural and economic boundaries.