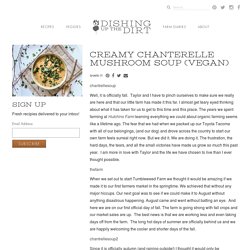 Taylor and I have to pinch ourselves to make sure we really are here and that our little farm has made it this far. I almost get teary eyed thinking about what it has taken for us to get to this time and this place. The years we spent farming at Hutchins Farm learning everything we could about organic farming seems like a lifetime ago. The fear that we had when we packed up our Toyota Tacoma with all of our belongings, (and our dog) and drove across the country to start our own farm feels surreal right now. But we did it. BUTTERNUT MINESTRONE WITH SAGE, CHICKPEAS & CHARD » The First Mess // Plant-Based Recipes + Photography by Laura Wright. Coconut Broccoli Soup Recipe. For the time being the QUITOKEETO studio has no kitchen. 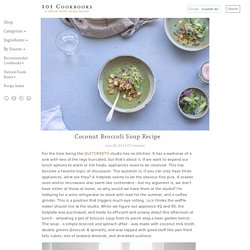 It has a warhorse of a sink with two of the legs truncated, but that's about it. If we want to expand our lunch options to warm or hot foods, appliances need to be involved. This has become a favorite topic of discussion. The question is: if you can only have three appliances, what are they? A hotplate seems to be the obvious first pick. Heidi’s Spicy Green Soup Recipe. I’ve made this soup three times in the past week and a half. 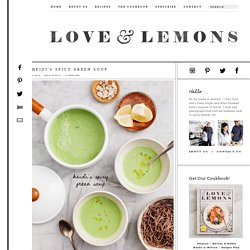 I know – it’s not quite soup season yet, but you probably still have bunches of summery herbs and this recipe is such a wonderful way to use them. This one comes from Heidi Swanson’s book Near and Far, which has been a favorite in my kitchen since it came out last fall. Easy Vegetarian Pho Recipe. There are certain foods that I eat for dinner all the time that never make it here. 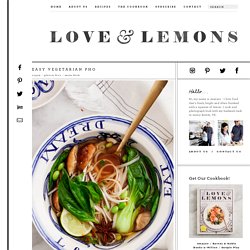 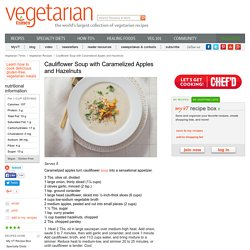 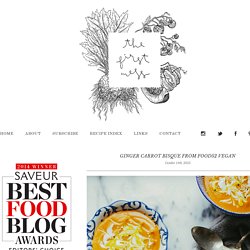 Pin it! I’ve been making meals and bits from cookbooks whenever I have the chance lately. It’s a very chill (and also necessary) break from my own cookbook stuff. Lots of Ina classics in the mix (obviously), but since Fall is the season of the cookbook release, there’s been good stuff from plenty of other new works. I generally cook by feel/whatever’s around/whatever urgency is grabbing at me, so the straightforward process of opening a book, measuring, and connecting the dots has been grounding. A little while ago, Gena sent me her new book based on her Food52 column, The New Veganism (which I love). Thai Curried Butternut Squash Soup. Have you ever gotten to the airport only to find that your pilot has gone missing? 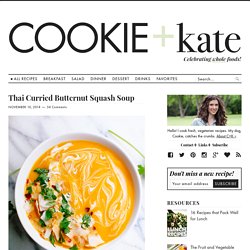 Apparently that happens. Butternut Squash Coconut Curry. Is anyone else completely over this winter? 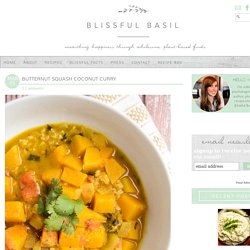 Ugh. I don’t think I can take another inch of snow or another day in which reaching double digits is a pleasant surprise compared to the projected forecast. My black car now has a snazzy new paint job which I like to call Salt-Stained-Snow-Dusted Grayish White. Fortunately, it looks like Friday will bring a warm spell: 39º Fahrenheit. There’s about 20% sarcasm in that statement and about 80% actual excitement. Coconut Curry Pumpkin Soup Recipe. Chanterelle & Lentil Soup. Are we really ready for this? 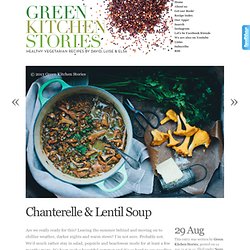 Leaving the summer behind and moving on to chillier weather, darker nights and warm stews? I’m not sure. Probably not. We’d much rather stay in salad, popsicle and beachwear mode for at least a few months more. Coconut Broccoli Soup Recipe. Turkish Chickpea and Potato Stew with Baharat. Welcome to Herbivoracious! 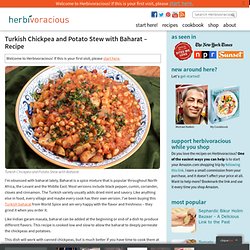 If this is your first visit, please start here. Turkish Chickpea and Potato Stew with Baharat. Saffron Yellow Pepper Soup Recipe. One of the things I've been working on lately is a little booklet related to QUITOKEETO. I think of it as a small 'thank you' to all of the people on our mailing list, many of whom we've been lucky to meet or email with over the past two years. It's a summer inspiration board in booklet form filled with recipes, photographs, sights, & sounds. Just a little something to share, filled with things we're excited about, free to download. We even dusted off the old Olivetti Valentine to type the recipes. The final touches should come together in the coming days, and if you're on the mailing list, you'll get the link as soon as it's ready.

Three-bean chili. In my fantasy recipe-writing league, I’d cover everything, a million questions you hadn’t even thought to ask yet. Every recipe would work on a stove, slowly braised in the oven, on a grill, in a slow-cooker, a pressure-cooker, on a train, in a car, or in a tree. You could make the vegetarian carnivorous, the carnivorous paleo, the gluten-full gluten-free, the sour cream could always be swapped yogurt which could always be swapped with buttermilk, or milk and lemon, or soy milk and vinegar. Green Squash Soup. Roasted carrots + rice w/ zingy turmeric broth. Pin it! Pin it! This simple bowl reminded me of why I actually started this site in the first place. With the emails, sorta silly mismatched dish piles, multiple attempts at a palatable goji berry sauce (one day I’ll get it) etc., this sort of reminder is a surprising ray of light. Green Curry Porridge Recipe. Delicious Vegan Chili.

Spicy Bean Chili with Quinoa and Kale. I got back from California (Earthbound Farm is amazing, posts soon to follow), and it was suddenly autumn in Milwaukee. Dark in the mornings, dark in the evenings, a little bit chilly/rainy/gray overcast skies. Some of the leaves are turning colors already, and I can’t believe it’s October. Which is a good thing, I think, but the transition was a little too quick for my taste.

Regardless, this kind of weather is the impetus for food like this. Miso Tahini Soup Recipe. Last weekend we took our little shop project, QUITOKEETO, to the Remodelista Holiday Market. Curried lentils and sweet potatoes. Thanksgiving usually marks the end of my yearly fall fanaticism, and the beginning of the inevitable resignation to winter that goes into full-swing after the New Years. I’m no longer obsessed with the myriad of fall flavors, its squashes and medium-body soups and wines, I just want to stay warm. I hibernate, so to speak. Coconut Red Lentil Soup Recipe.