Harmony Korine. Elia Kazan. Greek-American film and theatre director, producer, screenwriter, novelist Elia Kazan (;[2][3] born Elias Kazantzoglou (Greek: Ηλίας Καζαντζόγλου);[4] September 7, 1909 – September 28, 2003) was a Greek-American director, producer, writer and actor, described by The New York Times as "one of the most honored and influential directors in Broadway and Hollywood history".[5] Kazan influenced the films of the 1950s and 1960s with his provocative, issue-driven subjects. 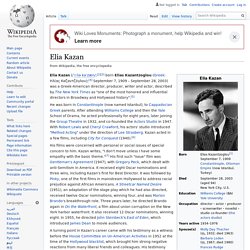 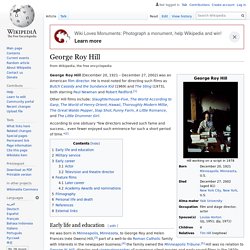 He is most noted for directing such films as Butch Cassidy and the Sundance Kid (1969) and The Sting (1973), both starring Paul Newman and Robert Redford.[1] According to one obituary "few directors achieved such fame and success... even fewer enjoyed such eminence for such a short period of time. Monte Hellman. Monte Hellman (born Monte Jay Himmelman;[2] July 12, 1932) is an American film director, producer, writer, and editor. 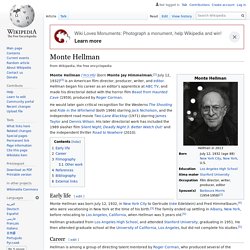 Hellman began his career as an editor's apprentice at ABC TV, and made his directorial debut with the horror film Beast from Haunted Cave (1959), produced by Roger Corman. Early life[edit] Mike Hodges. British film director and screenwriter His theatre plays include Soft Shoe Shuffle (1985) and Shooting Stars and Other Heavenly Pursuits (2000), which was adapted for BBC radio. 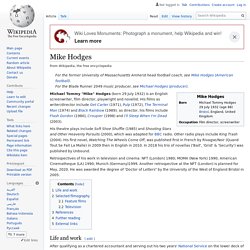 Other radio plays include King Trash (2004). His first novel, Watching The Wheels Come Off, was published first in French by Rivagse/Noir (Quand Tout Se Fait La Malle) in 2009 then in English in 2010. In 2018 his trio of novellas ('Bait', 'Grist' & 'Security') was published by Unbound. Tobe Hooper. Willard Tobe Hooper[a][2] (January 25, 1943 – August 26, 2017) was an American director, screenwriter, and producer best known for his work in the horror genre. 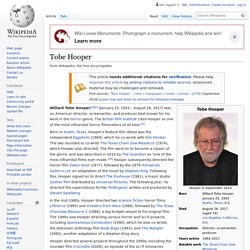 The British Film Institute cited Hooper as one of the most influential horror filmmakers of all time.[3] Early life[edit] Hooper was born January 25, 1943 in Austin, Texas, to Lois Belle (née Crosby) and Norman William Ray Hooper, who owned a theater in San Angelo. The film The Texas Chain Saw Massacre explores hicksploitation themes related to his childhood.[5] He first became interested in filmmaking when he used his father's 8 mm camera at the age of nine. 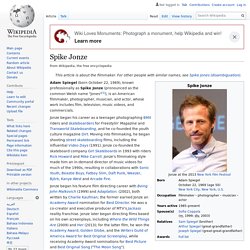 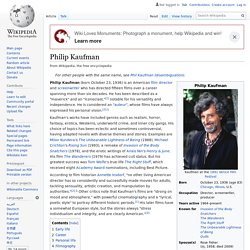 He has been described as a "maverick" and an "iconoclast,"[1] notable for his versatility and independence. He is considered an "auteur", whose films have always expressed his personal vision.[2]:1. James Ivory (director) James Francis Ivory (born June 7, 1928) is an American film director. 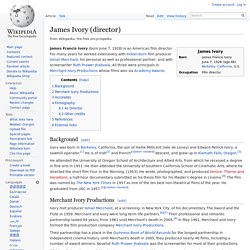 For many years he worked extensively with Indian-born film producer Ismail Merchant, his personal as well as professional partner, and with screenwriter Ruth Prawer Jhabvala. All three were principals in Merchant Ivory Productions whose films won six Academy Awards. Marcel L'Herbier. Marcel L'Herbier, Légion d'honneur (23 April 1888 – 26 November 1979), was a French filmmaker who achieved prominence as an avant-garde theorist and imaginative practitioner with a series of silent films in the 1920s. 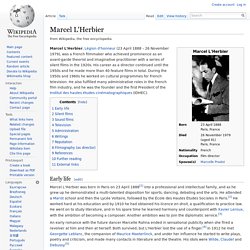 His career as a director continued until the 1950s and he made more than 40 feature films in total. During the 1950s and 1960s he worked on cultural programmes for French television. He also fulfilled many administrative roles in the French film industry, and he was the founder and the first President of the Institut des hautes études cinématographiques (IDHEC). Roland Joffé. §Education[edit] 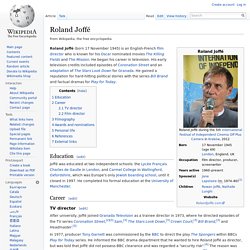 Terry Gilliam. Alejandro González Iñárritu. González Iñárritu is the second Mexican director to win both the Academy Award for Best Director and the Directors Guild of America award for Best Director, after Alfonso Cuarón in 2014. He is also the first Mexican director to win the Prix de la mise en scene or Best Director Award at Cannes (2006). Early life and career[edit] Alejandro González Iñárritu was born in Mexico City, the son of Luz María Iñárritu and Hector González Gama.[1] Jean-Luc Godard. Jean-Luc Godard (French: [ʒɑ̃lyk ɡɔdaʁ]; born 3 December 1930) is a French-Swiss film director, screenwriter and film critic. He is often identified with the 1960s French film movement La Nouvelle Vague, or "New Wave". Like his New Wave contemporaries, Godard criticized mainstream French cinema's "Tradition of Quality", which "emphasized craft over innovation, privileged established directors over new directors, and preferred the great works of the past to experimentation.

" To challenge this tradition, he and like-minded critics started to make their own films. Many of Godard's films challenge the conventions of traditional Hollywood in addition to French cinema.[3] He is often considered the most radical French filmmaker of the 1960s and 1970s. James Gray (film director) James Gray (born 1969) is an American film director and screenwriter. In 1994, at age 25, Gray made his first feature film Little Odessa, a film starring Tim Roth about a hit man confronted by his younger brother upon returning to his hometown, "Little Odessa," a section of Brighton Beach, Brooklyn.[4] The film won the Silver Lion at the 1994 Venice Film Festival.[5] In November 2012 he was selected as a member of the main competition jury at the 2012 International Film Festival of Marrakech. [citation needed] Gray married Alexandra Dickson in 2005. The couple have three children.[9] Alejandro González Iñárritu. Peter Greenaway.

Peter Greenaway, CBE (born 5 April 1942) is a British film director. His films are noted for the distinct influence of Renaissance and Baroque painting, and Flemish painting in particular. Christophe Gans. Seth Gordon. Michel Gondry. Alejandro González Iñárritu. Matteo Garrone. This article incorporates text from the Wide Screen journal site. Matteo Garrone is an Italian film maker. Jean-Luc Godard. Michael Haneke. In 2013 Haneke won the Prince of Asturias Award for the arts. Todd Haynes. Gregory Hoblit. Alfred Hitchcock. Over a career spanning more than half a century, Hitchcock fashioned for himself a distinctive and recognisable directorial style.[6] He pioneered the use of a camera made to move in a way that mimics a person's gaze, forcing viewers to engage in a form of voyeurism.[7] He framed shots to maximise anxiety, fear, or empathy, and used innovative film editing.[7] His stories often feature fugitives on the run from the law alongside "icy blonde" female characters.[8][9] Many of Hitchcock's films have twist endings and thrilling plots featuring depictions of violence, murder, and crime.