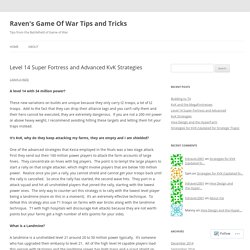 These new variations on builds are unique because they only carry t2 troops, a lot of t2 troops. Add to the fact that they can drop their alliance tags and you can’t rally them and their hero cannot be executed, they are extremely dangerous. If you are not a 200 mil power or above heavy weight, I recommend avoiding hitting these targets and letting them hit your traps instead. It’s KvK, why do they keep attacking my farms, they are empty and I am shielded? One of the advanced strategies that Kezia employed in the finals was a two stage attack.

What is a Landmine? A landmine is a unshielded level 21 around 20 to 50 million power typically. Four stages of farms There are four stages of a farm alliance, if you are at stage one, your farms are at level 9 and you hit them to get your resources, taking a 40% loss of resources in the process. Stage two is that you progress to level 14 farms with bricks and T1 troops. Stage four is called distributed farming. Broncotrojan.com-Bronco Trojan Alliances Website - Game of War Fire Age. - Helping people to cure gaming game of war addiction to live normal life ! 100+ Game of War Cheats, Tips & Guides. 11-26-2015 - Take a Break From the Holidays and Build the Top Trap Account for 2016. Game Of War: Fire Age - Guide, description, help for the game / English version. Battle Tested: The Best Boosts For Defense - Game Of War Real Tips. This is the 3rd post in the series of Battle Tested articles. 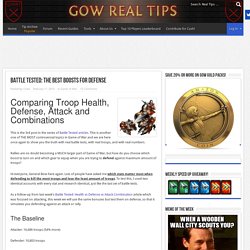 This is another one of THE MOST controversial topics in Game of War and we are here once again to show you the truth with real battle tests, with real troops, and with real numbers. Rallies are no doubt becoming a MUCH larger part of Game of War, but how do you choose which boost to turn on and which gear to equip when you are trying to defend against maximum amount of troops? Hi everyone, General Bow here again. Lots of people have asked me which stats matter most when defending to kill the most troops and lose the least amount of troops. To test this, I used two identical accounts with every stat and research identical, just like the last set of battle tests. As a follow-up from last week's Battle Tested: Health vs Defense vs Attack Combination article which was focused on attacking, this week we will use the same bonuses but test them on defense, so that it simulates you defending against an attack or rally.

The Baseline Navi. 100+ FREE Guides, Tools, and Strategies. Playstyle Examples. Due to monetary, time, rss, or other constraints we can't all afford the same playstyle. 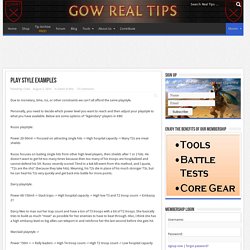 Personally, you need to decide which power level you want to reach and then adjust your playstyle to what you have available. Below are some options of "legendary" players in K80: Russo playstyle: Power 20-50mil -> Focused on attracting single hits -> High hospital capacity -> Many T2s are meat shields Russo focuses on baiting single hits from other high level players, then shields after 1 or 2 hits. Darcy playstyle: Playstyle Examples. Protecting Yourself - A Beginner's Guide - Inside Game of War. You will get attacked a lot in Game of War, there is no avoiding it. 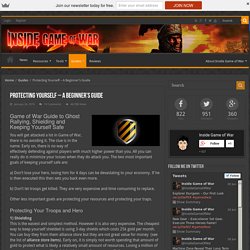 The clue is in the name. Early on, there is no way of effectively defending against players with much higher power than you. All you can really do is minimize your losses when they do attack you. Protecting Yourself - A Beginner's Guide - Inside Game of War. 13 Game of War Tips, Tricks & Strategies. Game of War is an addictive RTS style game for the iPhone, iPad and Android that delivers a lot of fun and a good amount of frustration. 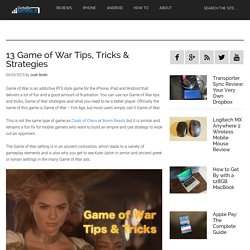 You can use our Game of War tips and tricks, Game of War strategies and what you need to be a better player. Officially the name of this game is Game of War – Fire Age, but most users simply call it Game of War. This is not the same type of game as Clash of Clans or Boom Beach, but it is similar and remains a fun fix for mobile gamers who want to build an empire and use strategy to wipe out an opponent. 13 Game of War Tips, Tricks & Strategies.