We asked experts where beauty ideals come from. They (mostly) disagreed. Australians are serious about beauty. 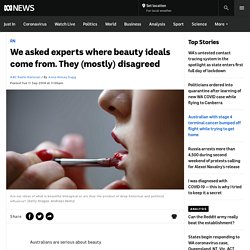 The beauty industry is worth billions each year — but where do we get our ideas of what beauty is? There's disagreement among those who've tried to trace the source of our perceptions of beauty. No more Mr Muscle: the activists championing body confidence for men. Back in 2013, Kelvin Davis was shopping for a red blazer in his home town of Columbia, South Carolina, when he was publicly body shamed. 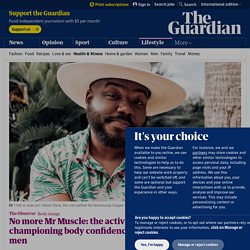 The school teacher, who is 5ft 10in and wears 38in waist trousers, had not previously been concerned about his frame. “The tipping point was when the sales assistant told me I was too big to shop there,” he says, adding it was made worse by the fact that others overheard. “I felt very insecure and didn’t know how to deal with that.” So he turned online, launching his blog, Notoriously Dapper. Davis felt overlooked by the fashion industry, because of his size and colour. (9) We Are the Men - Global Male Body Positivity Campaign. Body positivity and men: The rise of male acceptance – GASH. Text by Anthon Vodden The body positivity movement has been the driving force for acceptance and acknowledgment of „normal bodies“, triggering a shift within society, media and fashion. 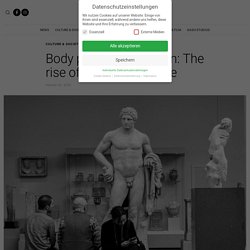 At the forefront of the change are strong and inspirational females that have proved self-love is elementary. Will males follow the movement? We often forget that males are taught from a very young age to adhere to the boundaries of masculinity; being strong, not showing emotions, having a certain body type and working hard. The racial origins of fat stigma. Watch the new CBSN Originals documentary, "Speaking Frankly | Fat Shaming," in the video player above. 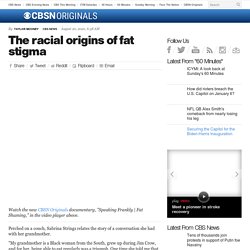 Perched on a couch, Sabrina Strings relates the story of a conversation she had with her grandmother. "My grandmother is a Black woman from the South, grew up during Jim Crow, and for her, being able to eat regularly was a triumph. New campaign challenges male body image stereotypes - Australian Men's Health Forum. A new campaign from the UK aims to put the issue of male body image on the public agenda. 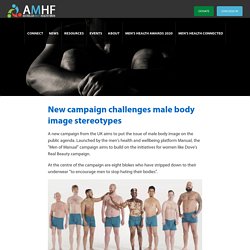 Launched by the men's health and wellbeing platform Manual, the "Men of Manual" campaign aims to build on the initiatives for women like Dove's Real Beauty campaign. At the centre of the campaign are eight blokes who have stripped down to their underwear "to encourage men to stop hating their bodies". According to Ben Whittaker, the UK’s first plus-sized male model who is a part of the campaign: "Growing up seeing men on social media, seeing this 'Men’s Health' body, being told that all men have to look a certain way, and they have to have chiseled chests and rock hard abs, it put a strain on my mental health.

" The Struggles of the Plus-Size Menswear Market. Six years ago, when Kelvin Davis went clothes shopping for a new teaching job, he couldn't find his size. 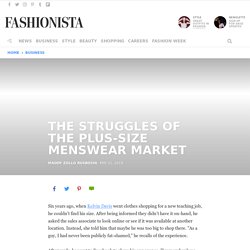 After being informed they didn't have it on-hand, he asked the sales associate to look online or see if it was available at another location. Instead, she told him that maybe he was too big to shop there. (20) SHRILL: SEASON 1 Trailer (2019) – Comedy TV Series. The History of Obesity - The last 100 years Global - Sermo. The History of Obesity – The Renaissance to 1910 - Sermo.

The first post in this 3 part series on the history of obesity discussed the view of obesity from the Stone Age to the Renaissance, when fatness or obesity was viewed as beautiful, healthy, and a sign of prosperity. 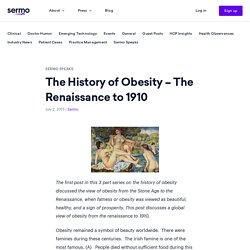 This post discusses a global view of obesity from the renaissance to 1910. Obesity remained a symbol of beauty worldwide. There were famines during these centuries. The Irish famine is one of the most famous. (A) People died without sufficient food during this and other famines. The History of Obesity - Stone Age through the Renaissance - Sermo. Today we’ll begin a 3-part series on the history of obesity from a historical perspective, from the Stone Age to current day, across cultures and throughout the world, contributed from a Sermo physician. 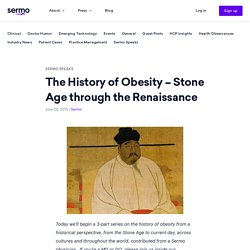 If you’re a MD or DO, please join us inside our physician-only community! Obesity today is described as an epidemic, blamed on fast food and modern life style, and defined as a contributor of increased mortality. (20) A Brief History of Fat, and Why We Hate It. Fat Stigma in Four Countries. In 1989, obesity researchers Jeffery Sobal and Albert Stunkard reviewed 144 studies and discovered an inverse correlation between a woman’s weight and her social and economic status in nearly all developed nations: The less a woman weighed, the higher status she enjoyed. 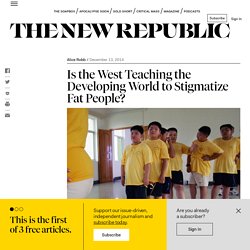 But in poor countries—particularly those historically prone to food shortages—they found the opposite correlation: The heavier women enjoyed higher social and economic status. A lot has changed. Even in cultures that traditionally valued heaviness, obesity has gained greater stigma while thinness has been increasingly valorized. (There hasn’t been a complete inversion: In Mauritania, for example, women are still sometimes sent to “fat farms” to be plumped up for the marriage market.) Eileen Anderson-Fye, an anthropologist at Case Western Reserve University in Ohio, has been pioneering the cross-cultural study of fat stigma: Does it arise organically as BMIs increase, or is it a Western import? (20) Rihanna’s fashion show praised for diversity, inclusivity l GMA. (20) Drew's News: Viral Fenty Plus-Sized Model Spills About Savage x Fenty Fashion Show. Body Diversity on Teen Television Still Needs Improvement.

In this op-ed, writer Tiffany Onyejiaka examines the lack of body diversity on teen television and why this sort of representation is just as important. 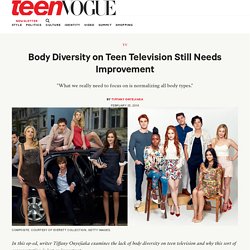 Over the past few years, Hollywood has undoubtedly made progress in regards to diversifying the casts and characters on mainstream teen television. After all, it’s no secret that in the first decade of the 2000s popular teen shows like Gossip Girl, The OC and One Tree Hill had casts largely made up of heterosexual white characters, with a few token minorities thrown into the background for what felt like cheap diversity points. However, there's been a turn in recent years, the TV landscape more inclusive than ever thanks to increased visibility of society's multiplicities: people of color, LGBTQ-identified characters, and the disabled community.

10 Body Positive Shows to Watch. Over the last few years, fat women have spearheaded a body positivity movement fighting against myopic portrayals of fat people that have long-defined their representation in television and film. The shift in culture is about much more than just an increased number of fat people seen in movies and television. It also requires the portrayal of non-thin characters who are complex and relatable, not just caricatures that depend on tired tropes and storylines. Often times creators are more invested in capitalizing on the body positivity trend than actually listening to the needs and demands of the movement. While most women in this country are plus-size, they represent less than 2% of images in media. Body diversity in media still has a very long way to go, but thankfully there are some examples that stand out. Lingerie’s Quest for Body Positivity - NOWFASHION. After losing significant market shares in 2018 following transphobic and fat-shaming statements made by its former CEO Ed Razek, Victoria’s Secret revealed the brand’s first “body positive” campaign with plus-size model Ali Tate Cutler earlier this month.

In spite of the lingerie brand’s efforts to present itself in a more inclusive light, this new campaign has been received with mixed feelings. On social media, Victoria’s Secret is still repeatedly accused of promoting an outdated and unrealistic vision of the female body. In addition, the American brand has also been accused of letting the quality of its products slip – and now, it is being singled out for trying to tug at the purse strings of the plus-size customer. 'You are more than a body': the lingerie brand that picks models without seeing them. When it comes to fashion models, you may think it’s looks that matter. But, for Maïna Cissé, the founder of lingerie brand the Underargument, stories are the thing. In 2018, Cissé introduced what she calls “anticasting”, a new method to find the models for the images on her site, that could also be described as “blind”.

She asks interested parties to submit their stories based on a theme of her collections – which run from the problem of perfectionism to what a loving relationship looks like now. It’s Time to Start Casting Fat Actors in Fat Roles. I’ve long loved movies based on a true stories. I often spend weekday afternoons in the bluish glow of a matinee, watching thrillers ripped from the headlines, as well as biopics and historical dramas. The ritual of it is comforting: picking out seats, ordering drinks, tenting my knees between the seat and the metal bar in front of it. I drink in so many strangers’ stories to glean what I can learn, and to deepen my empathy and understanding. It’s an exercise in building my own humanity, and learning to see it more clearly in those around me.

How Art Has Shaped Female Beauty Ideals throughout History. How the 'ideal' woman's body shape has changed throughout history. Five Reasons Why So Many People Are Fatphobic. Evolution of Female Beauty Throughout History. Beauty Standards: See How Body Types Change Through History. The History of Feminine Beauty. ‘OK, I’m fat - and this is how it feels’ 'Shrill' rewrites the script on 'fat' and 'millennial' (opinion) Obesity can't be determined by weight alone, according to new Canadian guidelines. The physicians, who are part of the non-profit Obesity Canada and the Canadian Association of Bariatric Physicians and Surgeons, believe doctors have not been treating patients with obesity the way they should be.

In their view, weight discrimination impedes treatment and medicine has made little room for body positivity. Obesity, they argue, should be defined by a person's health, rather than just their weight. The guidelines, which were published this week in the Canadian Medical Association Journal, reccomend that obesity be classified as a chronic illness that requires tailored treatment and long-term care.

The authors also encourage doctors to stop relying on BMI (or body mass index) alone when it comes to diagnosing their patients. By that definition, people would only be diagnosed as obese if their body weight affects their physical health or mental wellbeing, said Dr. Body Positivity: The movement on a mission to change the way we see ourselves. The body positivity movement is more than a passing trend on the internet that popularises itself for the span of a few weeks before people go on to the next best thing.

This movement is rooted in people’s want and need to be able to accept themselves and those around them as they are rather than what popular media would like us to be. No matter your body type, skin colour, fashion sense or gender orientation, this movement seeks to include everybody who dares to step outside of the perfect image of skinny, muscular, tall, fair-skinned people that the media inaccurately represents. Body image and presentation is the source of stress and anxiety for a large number of people if they do not fit the supposed norm and unfortunately, the ambient noises and people’s opinions on one’s body type doesn’t help either. The movement first started in 1969 when the National Association of Advance Fat Acceptable was established.

Follow more stories on Facebook and Twitter. Body positivity definition and meaning. These examples have been automatically selected and may contain sensitive content. Read more… I am joining the male body positivity movement. (18) What Is The Body Positive Movement? Fighting Fat Discrimination, but Still Wanting to Lose Weight. Fattitude Trailer. Curvy Models Grace the Runway at New York Fashion Week. Discrimination against fat people is so endemic, most of us don’t even realise it’s happening.