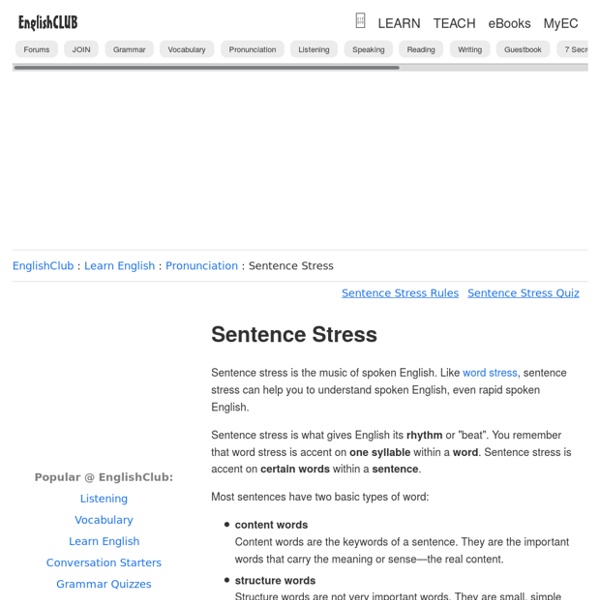 Free IELTS Listening practice test to help pass the exam The IELTS Listening test will take about 30 minutes, and you will have an extra 10 minutes to transfer your answers to the answer sheet. The four parts of this practice Listening test are presented over four separate web pages. Make sure you move swiftly from one page to the next so that your practice is as realistic as possible. Download the question paper and blank answer sheet before you start, and write your answers on the question paper while you are listening. How to pronounce English place names – Jason Anderson – Teacher, teacher educator and author Download a free resource for teachers! A couple of weeks ago, my students requested a lesson on pronouncing place names in London and England because they were always having difficulty making themselves understood at train and coach stations. I didn’t find many resources on the Internet designed for language students, only more technical guides that often went into too much detail and didn’t provide any useful rules. So I did some research, and found the following, which includes some really useful rules that can make the pronunciation of English place names guessable upon first encounter.

How to use rhetoric to get what you want - Camille A. Langston Aristotle, the student of Plato, taught first in Plato’s Academy and then tutored Alexander the Great, and finally established his Athenian philosophical school the Lyceum. The Lyceum is an amazing place to visit. Watch this video to learn more about the its remains here. Intonation in English pronunciation What is intonation? Intonation and stress are closely linked. In fact it's impossible to dissociate them. They go hand in hand. Intonation is about how we say things, rather than what we say, the way the voice rises and falls when speaking, in other words the music of the language.

Daily English Listening - Appearance Vocabulary - High Level Listening Disheveled "Disheveled" by Mark and Kat. 1. 10 tricky pronunciations Dictionaries are descriptive, not prescriptive, and if everybody started pronouncing space with a silent ‘p’ or genius with a hard ‘g’, then Oxford Dictionaries would reflect that fact. But there are some pronunciations, of course, which are more widely accepted than others. Some words – like scone and schedule – have two widely accepted pronunciations. How to overcome your fear of public speaking Why are many people afraid of public speaking, and what can be done about it? Ros and Neil Johnson, speech and drama specialists at Theatresaurus, explain in response to our Facebook fans' request. The fear of public speaking is known as glossophobia. According to one estimate, 74 per cent of people suffer from various forms of this phobia and ten per cent of people are genuinely terrified. The fear of public speaking is the number one phobia in America and is more common than the fear of heights or the fear of snakes, which rank two and three respectively.

Assimilation or elision? - Adrian Underhill's Pronunciation Site Assimilation or elision? This is the question is raised by teacher Regina Cardenes (studying for the Trinity College Diploma) I’m hoping to get help with regards to the difference between assimilation and elision. I know that assimilation is when a sound at the end of a word is modified depending on the first sound in the next word and that elision is when a sound disappears. Making the right choices: ‘Lean On Me’ – On the same page Every word in the song “Lean On Me” by Bill Withers has been written into a grid with some distractors. Starting in the upper left corner, students complete the lyrics choosing one of the words available right next to the last word in any direction and using each square only once. To guide them through the process, the writing worksheet provides students with a few words in each line, including the first ones, which are also capitalised in the grid for easier reference. You may want to model and play the first two lines of the song so that the students can understand the procedure. Students will be practising a number of skills as they make their choices.

A video tutorial by TED-Ed Club Members on public speaking…and more Imagine that you’re a student with a question about public speaking. Where will you go for advice? For many students, the answer is…YouTube. That’s why for her TED-Ed Innovation Project, technology integration specialist Jennifer L.